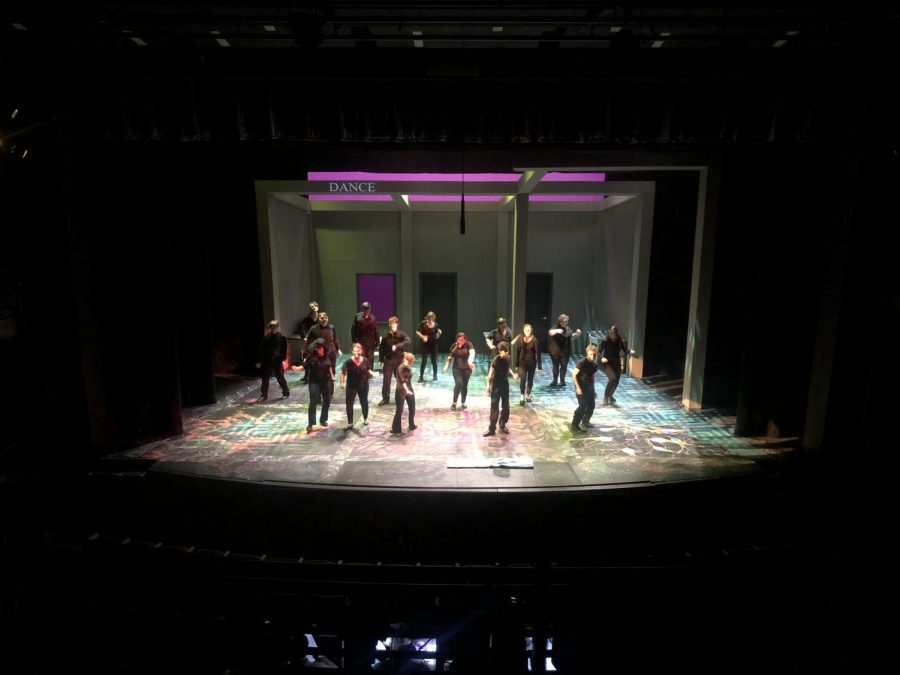 Cast members rehearse a dance scene from the play, “Love and Information,” on Monday, Feb. 19, 2018.

Underneath the umbrellas of “love” and “information” are a variety of social situations, from basic everyday interactions to serious or tragic ones. Love can be displayed by holding hands in the park or taking care of a significant other.

It is conveyed in the form of information, either through speech, physical interaction or some means of passing along a message. Yet information can be about any emotion or fact and is instrumental in guiding human decision making.

The play “Love and Information” by Caryl Churchill explored these two puzzling concepts through a collection of short skits to create a speculative plot that audience members can interpret in various ways. Professor of theatre Dan Crozier directed the piece in the Gladys Mullenix Black Theatre from Friday, Feb. 22 to Sunday, Feb. 25.

“The play itself is really about the way we’re kind of inundated with information and what it does to us,” Crozier said.

The storyline revolved around love and information, and it did so in a rather non-traditional sense.

“It’s really different than probably anything you will see, probably, anywhere around here,” Crozier said. “There isn’t a single plot. It’s 67 individual little playlets, some are two or three minutes long, some are 20 seconds. It’s this collage of very quick changes from one thing to the next.”

The “playlets” were acted out on an almost empty stage, apart from a tall structure in the background that contained a few doors, tables and chairs. On top of the formation, a single word was projected in each scene that gave context to the interaction. In one episode, the entire cast flooded the platform to dance, as the word “dance” was displayed in the background.

At the same time, each of the 16-member cast played multiple characters throughout the performance. The narrative did not concentrate on character development, but rather on what each character did or said in the individual scene, and what happened as a result.

“There’s a scene with two students, and the one student comes in and says ‘well, mom’s out. I have to tell you something. Mom’s not your mom. I’m your mom. Mom’s your grandmother.’ The scene is really about ‘well, do we have to tell mom that I told you?’’’ Crozier said. “It’s this piece of information which changes someone’s whole world, and then whether or not they’re going to share it with somebody else.”

Even though each of the scenes were different, they all contained an element of love, information or a combination of the two. Crozier’s previous example prompted the audience to ask “what will the characters do with that information?” The teen just discovered two people she loved have different roles in her life than she thought, so what should she do in response?

The length of scenes did not change how thought-provoking they were. Cast member, Simon Brown, ’19, walked out from stage right as the word “Zen” accompanied him on the background structure. He said “What’s the sound of one hand clapping? I’ve heard that one,” in a drawn out and slow manner and then strolled out to stage left.

Brown presented a calming technique used in the Zen tradition for meditation. It is not possible for one hand to clap, so it could be pictured numerous ways.

“I always interpreted the scene as a way to, kind of, direct the audience’s attention away from everything else that’s going on and give them a break,” Brown said. “The way the play is designed is that you have all these scenes and you can arrange them in whatever order you want.”

However, the goal of the play was not to be random, but rather to allow individuals to create their own interpretations of the plot. The scenes were divided into seven sections that must go in order, but within those sections were episodes that the director had a great deal of creative freedom with in terms of order and restructuring.

“I was in New York when it was playing but I didn’t see it, so I’ve never seen a production of it,” Crozier said. “It’s just me and the play and the actors, and the technicians and the designers working around what we think the ideas are in the play and how to best present them.”

“The author left in a back part of the script that said ‘random scenes,’” said stage manager Cayla Brandon, ’20. “You can put the random scenes wherever you want in the show, and you can mix up the segments as much as you want, but you can not move a scene outside of a segment and the last scene has to be the last scene.”

Just like the audience was supposed to, the actors had varying interpretations of this specific production of the piece as well.

“Even within the cast there were a lot of conspiracy theories about how the scenes are connected and how each of the seven acts plays into one another,” Brown said. “It’s really interesting to hear how different people view the scenes and how they connect, because there’s so many different ways you can look at it through so many different lenses.”

The work was extremely unique, especially in terms of theatre productions, but certain television shows have been produced in a similar style to “Love and Information.”

“I want to say that it’s like Black Mirror or the Twilight Zone, where as not every scene is connected but, innately, everything in the world is connected,” Brandon said. “Each scene is a snippet of life, and I suppose the author of the show is assuming that everything in life is love and information.”

“There’s some bizarre plays out there, definitely, but this one is very unique [since] it is so real in some parts, and in some parts, it’s kind of bizarrely not real but also real at the same time,” Brandon said. “It’s snippets of life, and it’s very real and raw.”