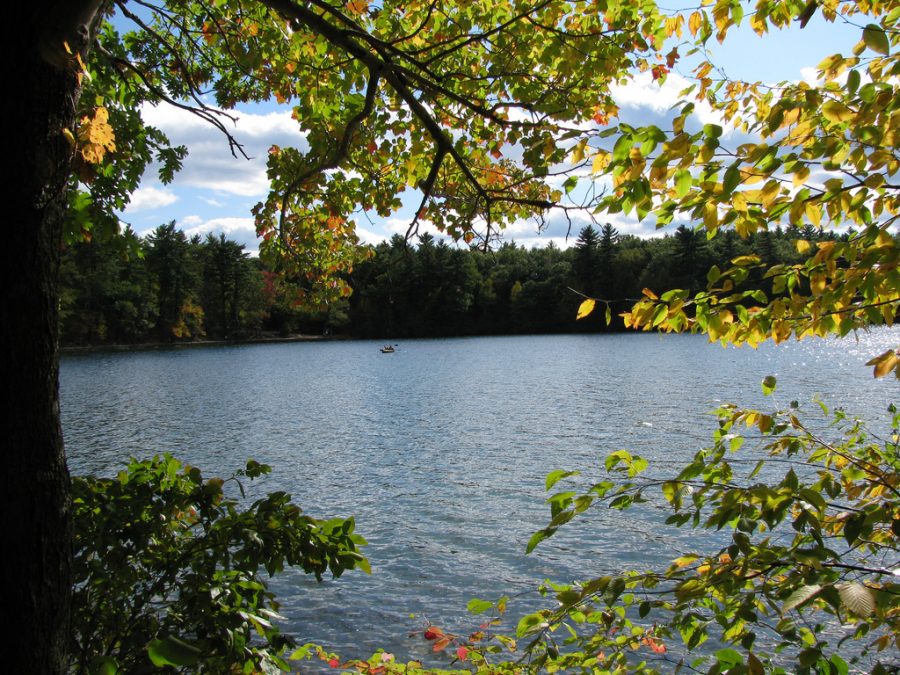 Walden Pond, pictured here on Oct. 4, 2008, was designated a National Historic Landmark in 1962 as a result of Thoreau’s memoir, “Walden; or, Life in the Woods,” which he wrote after spending two years living on its shores.

Scott Hess, professor of English at Earlham College, drew a crowd of faculty and students across disciplines at his talk on literature and the environment at 7 p.m. on Tuesday, Feb. 27 in the Quigley Auditorium.

The talk, titled “Walden Pond in the Anthropocene: Relational Theory, Climate Change and the Role of the Environmental Humanities,” highlighted the ways in which popular understanding of literature changes the way we interact with nature.

“Multi-disciplinary conversations, that is conversations that take place across multiple academic disciplines, are absolutely necessary to environmental science, since environmental issues by their nature require many perspectives to understand and address,” Hess said.

It was this focus on conversations across disciplines that motivated John Miller, assistant professor of English, to invite Hess to speak.

“Clearly Scott Hess is a mind to be reckoned with, one whose work shows us how unusual combinations can help us think past entrenched disciplinary boundaries and come to startlingly new insights,” Miller said in his introduction.

Miller said Hess is forging new ways of thinking that readers of multiple levels of understanding can appreciate. He said Hess’s first book, “Authoring the Self: Self-Representation, Authorship and the Print Market in British Poetry from Pope through Wordsworth,” first inspired him to consider Hess as a visiting lecturer.

“That book is really great and sort of accessible and sort of why we invited him and gave him a blank slate to talk about what he wanted,” Miller said.

Hess took advantage of this blank slate by opening his talk with how he came to study the environmental humanities and a new way of contextualizing famous works about nature.

“What matters, I’ve come to realize, isn’t so much the correct or original meaning of the text itself, but what kind of effects various performances or enactments of a text can generate,” Hess said.

This explanation of what matters tied directly to “Relational Theory,” a theory which forms the basis of Hess’s work. The theory is founded upon the thinking that all meanings are dependent on context and can evolve over time.

Hess spent the first half of the talk explaining this in greater detail and what he considered to be the abstract concepts upon which his research is built. Formulating new theories and concepts is valuable, according to Hess, because it has a real and visible effect on the way we act.

Hess then began to explain the ways these concepts apply to his own work with various authors. His current focus, he said, is on 19th century author Henry David Thoreau, most famous for his memoir, “Walden.”

The memoir is Thoreau’s classic account of choosing to live apart from society and in connection with nature on a lake in Concord, Massachusetts. The work has given Thoreau almost god-like status, according to Hess.

The impressive influence of Thoreau was a notable takeaway for many students.

“I was very surprised that Thoreau was this, like, very big ‘Jesus Christ’ overall when it came to environmental science and, like, climate change. It was really surprising that so many people were interested in him,” Caroline Holguin Rosa, ’20, said.

This influence and interest is potentially problematic for Thoreau’s readers and fans however, according to Hess.

“By framing their appeal through Thoreau and individualism, that sort of individual lifestyle, they tend to open up certain approaches to climate change and sort of close down others,” Hess said.

Hess explained using Thoreau as a path to understanding environmentalism can contribute to a widespread unwillingness to develop sustainable behaviors.

“Even committed environmentalists rarely change core lifestyle habits, such as driving a car or flying on vacation, when those changes would mess with habits that are core to their personal identities,” Hess said. “Nor do appeals to personal values fare much better.”

This type of inactivity brought Hess to the conclusion of his hour-long talk, referring to the titular concept of his lecture — the Anthropocene.

“The Anthropocene is our kind of current ecological situation,” Hess said. “We have to understand humans as a fundamental geological force, and that’s what Anthropocene evokes.”

This modern power of humans over the planet gives his work, and by extension our general understanding of works like “Walden,” great significance and consequence, Hess said. He proposed building new popular associations around the novel to combat issues like climate change.

In a brief question and answer session following the talk, Associate Professor of Philosophy Steven Farrelly-Jackson questioned what these new associations would look like.

Hess confessed he was not sure what form these new ideas would take but stressed their practical effects.

In addition to the talk for the larger campus community, Hess also taught a seminar on Wednesday, Feb. 28.

Students from a First-year seminar in environmental science and classes titled Environmental Ethics and Philosophy, American Environmental History and Literature About the Environment all met in the Tippie Alumni Center to hear Hess speak in more detail about his work.

Interactions with students are integral to Hess’s work, according to Miller, and he said it was love for the classroom and his appreciation for Allegheny’s “unusual combinations”  that made him an ideal fit for a visit to the college.

“I’ve never seen anybody who felt their scholarship came out of the classroom, but that seems to be how he feels, and I think that’s part of what makes him a good fit for Allegheny,” Miller said.