‘Black Panther’ is a game changer for the Marvel cinematic universe 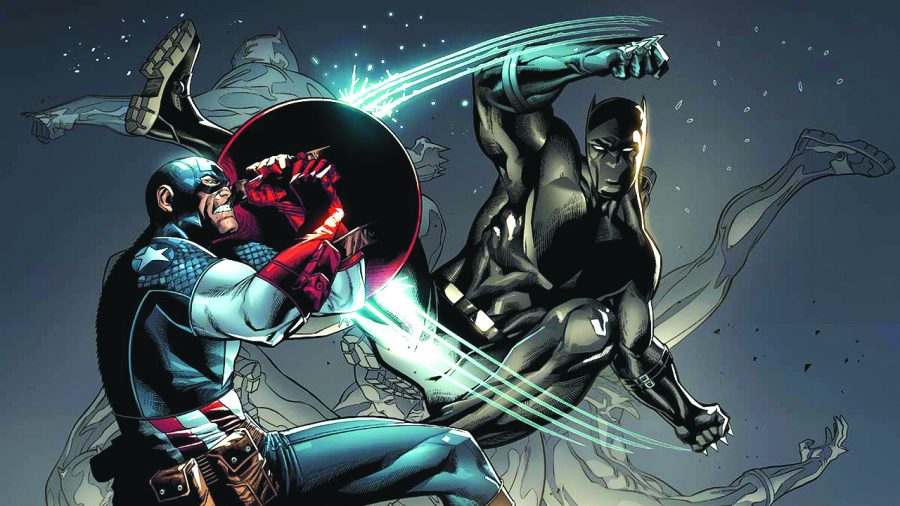 Move over Captain America — you have just been replaced. An origin story unlike any other, “Black Panther” is a bold and exhilarating superhero movie that showcases the revolutionary black superhero, Black Panther.

“Black Panther” is a breath of fresh air to the Marvel cinematic universe. The movie distinguishes itself from other Marvel movies in almost every way, from the costumes to the soundtrack, and gives a deep emotional plot with witty one-liners and outstanding fight scenes.

This movie takes you into the world of Wakanda in all its glory and has you wanting more when the credits start rolling.

To give some background without spoiling too much, “Black Panther” takes place directly after “Captain America: Civil War,” and despite being released later than other Marvel movies, it also takes place before “Spiderman: Homecoming,” “Doctor Strange” and “Thor: Ragnarok.” The movie follows T’Challa who returns home to take his place as the new king of Wakanda. The official synopsis reads:

“‘Black Panther’ follows T’Challa who, after the death of his father, the King of Wakanda, returns home to the isolated, technologically advanced African nation to succeed to the throne and take his rightful place as king. But when a powerful old enemy reappears, T’Challa’s mettle as king — and Black Panther — is tested when he is drawn into a formidable conflict that puts the fate of Wakanda and the entire world at risk, ” according to the Marvel website.

Wakanda is the home country of T’Challa and is where the majority of the movie takes place. As the synopsis states, Wakand is an isolated country but the most technologically advanced nation on earth. Its advancement is mainly because the nation is built above the only source of vibranium on earth, and this allows Wakanda to become a post-agricultural, technological society. The vibranium below their country is also used to create the Black Panther suit and other advanced weapons which are shown throughout the movie. It is awe inspiring at how Wakanda looks but also how it functions.

It is funny that when Wakanda had access to vibranium they created the most advanced society on the planet, but when the U.S. military obtained vibranium they produced a big, metal frisbee and gave it to one man. Ah, Americans.

“Black Panther” was pretty bold with its cast, but they could not have picked anyone better to play T’Challa or Killmonger, played by Chadwick Boseman and Michael B. Jordan respectively. The cast also included the two Tolkien white guys. Get it? Martin Freeman played Everett K. Ross and Andy Serkis played Ulysses Klaue, also recurring characters in the MCU. There are many other actors and actresses I would love to mention, like Lupita Nyong’o who played Nakai or Letitia Wright who played Shuri, but if I listed the entire cast, then you would be reading for quite awhile.

Though I do have to say, Princess Shuri is my new favorite Disney Princess. I do not care if they say she is not a real Disney princess. She is part of Disney, so she counts. Also, a quick shout out to the MCU for giving the Human Torch actors a second chance. It has happened twice since 2011 with both Chris Evans and Michael B. Jordan. Honestly though, it was probably for the best.

As I said earlier, Chadwick Boseman was the best actor they could have chosen to play T’Challa. Boseman gives an excellent performance as the Black Panther and newly crowned King of Wakanda. Throughout the movie, you see the emotional depth of T’Challa and the conflict he faces with others and with himself. T’Challa is a well-rounded character filled with grace, charisma and strength which you rarely see in characters. The relationships between T’Challa and his family are well-thought and definitely add to the plot. Trust me when I say the relationship between T’Challa and his younger sister, Shuri, is one of the best relationships between characters I have seen in a Marvel movie.

Opposing T’Challa is Erik Killmonger. Jordan plays Killmonger extremely well and was one of my favorite performances of the movie, besides T’Challa and Shuri. I would definitely put Killmonger in the top ten villains too. He is stunning, bold and striking but also has a past which, like all other fan-favorite villains, has you feeling sympathetic. For me, personally, to reference Killmonger, I was feeling the character. The guy has style and a certain level of competence which a great villain needs. I am a sucker for intelligent and cunning villains, like Baron Zemo, and Killmonger is all of this and more.

Two honorable mentions have to go to Okoye, the general of the Dora Milaje, played by Danai Gurira and M’Baku, the leader of the Jabari, the mountain tribe of Wakanda, played by Winston Duke.

M’Baku is a fierce warrior and leader, yet he also has some pretty great one-liners. Despite his intimidating appearance, M’Baku is a hilarious character who knew when to be serious and kick some butt.

Okoye also deserved an honorable mention because like M’Baku, she had her witty one-liners but was such a great character. She was a great fighter, and her relationship with T’Challa is sweet. She also knew when to kick some butt, except she did it better than M’Baku. I could talk for days about the characters in “Black Panther” but I am just going to highly recommend you go see the movie.

I do not want to go into the plot of the movie since it only came out a week ago and I do not want to spoil anything to anyone who has not seen it yet. But I can tell you, all the hype for this movie was spot on. Rotten Tomatoes has it rated at 97 percent, making it the highest rated Marvel movie so far. It also broke multiple box office records, and hilariously beat the total box office revenue of “Justice League” in one weekend. Sorry DC, better luck next time.

Overall, “Black Panther” was a phenomenal movie, having showcased multiple African tribes and their cultures while giving viewers one of the best Marvel films so far. With great performances and a strong narrative plot, “Black Panther” has delivered a fresh and exciting take on the traditional origin story.