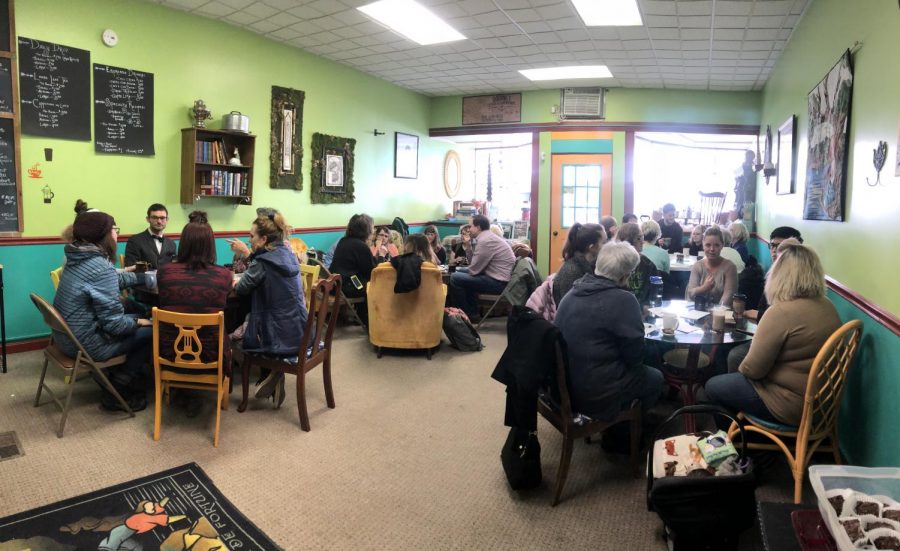 Allegheny students and members of the Meadville community attend an event which started discussions on death and coffee at Tarot Bean Roasting Company on Sunday Feb. 18, 2018.

What is there to say about death? It is interpreted as sorrowful yet joyous, disgusting but also beautiful and straightforward yet mysterious. Many religions and cultures explain this natural phenomena differently, but it is not a discussion  most people enjoy a cup of coffee over.

“Death and grief are concepts avoided at all costs in our society,” Audrey Pellicano said in a statement to “The New York Times.” Pellicano hosted what is known as a “Death Cafe” in New York City, where people of all ages gather to talk about passing away.

The “Death Cafe” is an international and voluntary organization that strives “to increase awareness of death with a view to helping people make the most of their (finite) lives,” according to the organization’s website. People have gathered in 52 countries to appreciate the natural process alongside baked goods and cups of joe.

Barbara Newcamp and Sue Mallick have been running death cafes in Meadville, PA since October 2017. They held their second gathering at Tarot Bean Roasting Company on Sunday, Feb. 18, which brought students from Allegheny College and community members together for the event.

“Basically it’s to get people to talk about death, because that’s taboo,” Mallick said.  “It gives people an opportunity just to open up and talk about it.”

Opening up was the main point of the event, according to Mallick and Newcamp. Despite their temptation, they did not give an agenda to participants.

“It’s hard not to do … I said to Susan this week ‘there’s this really good talk about death video on TED talk’ and I said ‘Is that an agenda?’ She said ‘that sounds like an agenda,’ and so I had to put that aside,” Newcamp said.

The owner of the venue, Mike Reed, allowed Newcamp and Mallick to utilize the space for free, in addition to donating coffee for the participants. His young business has been the location for other events held by local groups as well.

“We’ve had a craft fair for local crafters, we did a book fair for a local book publishing company … They made the flyer, they organized the event, they come in and they pull it off,” Reed said.

The setup was quick and simple, with four tables that five to ten participants either sat or hovered around for the 90-minute-long chats. Additionally, a table containing multiple short articles and more lengthy books on the subject was assembled next to the entrance. Reed said he did not manage the event, but that did not stop him from thinking about the concept.

Along with financial hardships, talking about death also addresses environmental concerns that come with the preparation of a body for many burial rituals, according to Reed.

“A big thing too that has been getting talked about, that was talked about alot at the last one and ended up striking up more conversations afterwards, was the burial process that we currently do in the United States,” Reed said. “And how there’s a whole other option that people are looking at, green burials,”

For a green burial, the body is not put into a coffin but rather wrapped in a cloth, allowing it to succumb to the elements more easily, according to Reed.

Along with the green burial came a number of less well-known ideas about death that have emerged out of the last two death cafes in Meadville.

“We talked about distribution of ashes. … At the end, one gentleman was talking about spirits and giving this really big, philosophical talk about spirits that kinda lost most of the table except the person next to him,” Newcamp said.

Much of the discussion also centered around anticipating a death or being able to come up with a plan in terms of how someone wants to be laid to rest.

“Part of it was the pre planning idea, so that the kids don’t have to guess what you want. And if you’re out of it, if you’re old and senile, how are you going to do it unless you write it down?” Mallick said. “There’s stories about how people argue about what to do with the remains and so forth and so on, so it’s pre-planning. … We talked about medicine and insurance and how that all fits in.”

Other topics included fear of the body in relation to decomposition and choices with reference to death.

Overall, Newcamp and Mallick were pleased with the results of this death cafe. The crowd, which doubled in size from the first one that was held in October 2017, experienced positive and diverse conversation that Newcamp said “flowed” the entire time.

“Last time was a little difficult to get conversations going, but this time there was no problem,” Newcamp said.

Mallick was particularly pleased that participants were young and old, and came from various backgrounds and experiences.

With an overall positive outcome, the two organizers are eager to hold their next death cafe in May at the Tarr Mansion in Diamond Park. Even though the event has outgrown Tarot Bean Roasting Company in terms of size, Reed has agreed to continue his coffee donations to the group.