GAP presents an evening of laughs with comedians, White and Mayes 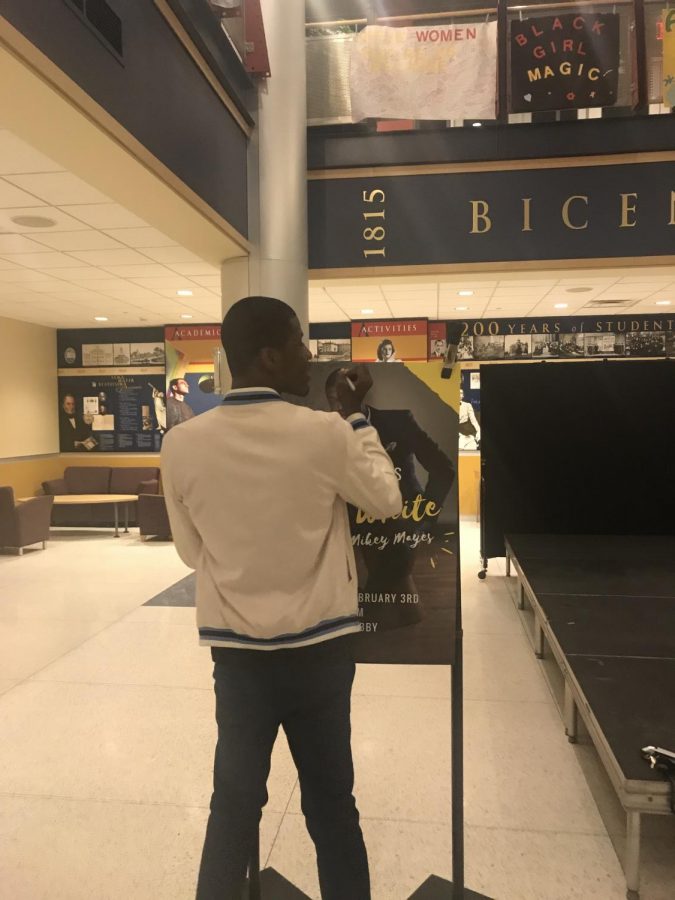 Neko White signs the event poster following his performance for the college.

Between extensive class schedules, constant sub-freezing temperatures and The Campus keeping people informed about  recent mishaps at Allegheny College, many students have found it difficult to get a laugh in this semester. To take a break from the busy semester, seats filled with students in the Henderson Campus Center Lobby on Saturday, Feb. 3, to watch comedians Neko White and Mikey Mayes perform live and lighten the mood.

Hailing from Harlem, New York, White is ten years into his acting career, after beginning in high school. He is the host of “How to be a Person” on Vice News and has made appearances on MTV 2’s “Hip Hop Hollywood Squares,” “Fox’s Laugh’s” as well as Axis TV’s “Gotham Comedy Live.”

According to White, both actors headline at clubs across New York City and upstate New York. He has also performed in San Antonio, Texas and Chicago, Illinois, with other shows planned in Ohio and Pleasantville, New York.

Their performance at Allegheny was organized by Gator Activities Programming. On their website, GAP states that its purpose is to “provide social activities for the student body … to enhance the social, recreational and cultural interests of students.”

President of GAP Laura Craft, ’18, explained the structure of the student run organization.

“I oversee our executive board, which is made up of nine other positions, both shared and some individual. There’s the vice president of annual events, which is two people, and then vice president of operations which is our equivalent to a treasurer … we have a pretty steady 25 to 30 general members,” Craft said.

White’s show was one of several events GAP planned for the spring, including the Nacho Bowl for Super Bowl Sunday and the major concert featuring BJ The Chicago Kid and SMINO,  scheduled for Feb. 24.

“Our Special Events chairs … they are the ones that contract all of the smaller events that come on campus, including Neko,” Craft said. “They contacted an agent that gave us a list of all the people we can afford, because we have a certain budget. Then we present three or four comedians to the general members and then they all vote on the one they like the most.”

GAP members were not only impressed with White’s smooth performances on stage, but his content also seemed to correlate with Allegheny’s statement of community, which is a requirement for any gues the club brings to campus.

White and Mayes arrived at 5 p.m. on Saturday for an interview that aired on “WARC Meadville.” After a short introduction and a comical conversation about Mayes getting the two pulled over on the New Jersey turnpike, White offered a preview of his style and material to the audience.

Similarly, Mayes strives to relate to the audience through joking about his own personal hardships.

“I was blessed with a terrible upbringing,” Mayes said. “I get to share my life stories with people and they get to laugh and I get to bring joy at places that, you know, would otherwise be painful, and that’s like a magic trick.”

The comedians stuck to their techniques during the act at 7 p.m. on Saturday. Mayes opened the show with a short performance. His explicit subject matter often left spectators gasping, however he loosened the audience up after poking fun at the commonly misspelled “Allegheny” and its rural surroundings.

Mayes passed the mic over to the headliner who delivered an hour long act. White presented a plethora of jokes and rants, starting with references to his upbringing in Spanish Harlem, following with trips to Whole Foods Market and ridiculing the commander-in-chief. A piece comparing Donald Trump to Lord Farquaad from Shrek was well received, judging by the round of applause and lengthy cackling that followed.

Aside from presenting their material, the two comedians interacted with the audience during and after the show. Mayes grabbed the attention of the audience as he asked everyone who was not from Pennsylvania to raise their hand, and then chose a student to share their home state as part of a bit. On another occasion, White strolled into the crowd and had someone google “Neko” to find a series of anime cats that preceded images of himself. Later, he ended with a short question and answer session. After the show, he stayed in the CC lobby to meet fans and autograph a poster for GAP.

Before they departed from Allegheny, White and Mayes stuck around for an interview and offered advice to anyone who may want to pursue a career in stand up comedy or show business.

“Jump out the window, bro,” Mayes said, followed by a pause.

“Bro, some people don’t know what that means.” White said, in response.

“That’s just the expression. A lot of the times, people think there’s going to be this set, like, road map of ‘oh, how do I do this?’ and they’ll ask: ‘how do I do this? How do I do that?’ but honestly I think half the time people are asking how to do something to stall from actually doing the thing,” Mayes said.

“Start tomorrow,” White said. “Just get some friends, sit around and do jokes in front of them, and see how you like it … as far as breaking into acting, there’s no way to do any of this stuff. You can follow what some people tell you, [and] you’re going to find some success, but it’s called history for a reason, it’s your story.”

The two entertainers also stressed truly loving the work, from doing small shows and getting paid nothing to receiving an applause from large crowds and making a decent living.

“You have to love the process,” White said. “If you really love something, chase it for the small things that you get out of it.”