A world where no body lives forever

'Altered Carbon' is more likeable than most critics 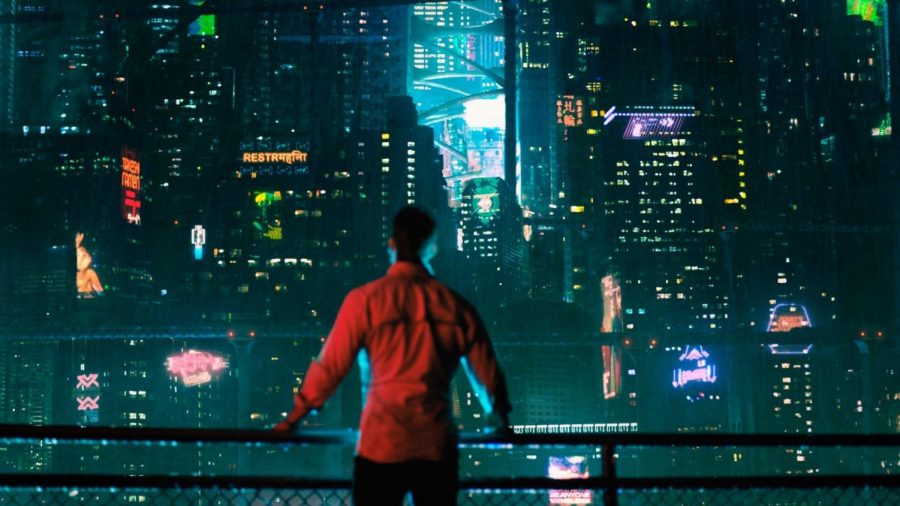 When it comes to the newest Netflix original, you will not be able to stop yourself from being sucked into the gritty and cyberpunk world of “Altered Carbon.”

Netflix has released many original shows and series over the past few years. Often these shows are hit or miss and range in a number of different genres from comedies to thrillers. While critics dismiss the show as another trope-filled sci-fi, “Altered Carbon” is a daring original that you should not pass up on binge watching.

Released on Friday, Feb. 2, the first season of the Netflix original  includes 10 episodes. The show was created by Laeta Kalogridis, who wrote the scripts for “Shutter Island” and “Terminator Genisys,” and produced by Kalogridis, David Ellison, Dana Goldberg and James Vanderbilt. Although critics have given it average reviews — Rotten Tomatoes’ 62 percent review, for example — the show boasts a diverse cast and an intricate plot.

The show not only has amazing visuals, but the soundtrack for the entire first season is not half bad. The soundtrack features songs by Nine Inch Nails, Johnny Cash, Radiohead, Daughter and BABYMETAL. A cover of Johnny Cash’s “Ain’t No Grave” included on the soundtrack is sung by cast member Renée Elise Goldsberry, who you may know from the Broadway show “Hamilton.”

The show, based on the 2002 novel of the same name by Richard K. Morgan, follows Takeshi Kovacs in a dark and exciting world where the human consciousness can be uploaded from one body to another. The consciousness upload works like this: the human’s consciousness is stored in the back of the neck in what they call a “stack.” If you die, as long as your stack is still intact, you can be moved to another body. The stack can be moved from body to body, which they call “sleeves.” Each time you move your stack, you receive a different body than your last, usually whatever the state government has readily available. Sometimes, in a few cases shown throughout the show, the new sleeve you receive is of a different race or gender. Unless, of course, you are one of the excessively rich members of society.

One of the main themes exhibited throughout the series is the enormous gap between the rich and the poor. In this world, the rich are called “Meths” and live higher up than the poor, who are often called “Grounders.” If it is not obvious from the names, the “Grounders” live lower than the wealthiest members of society, who live above the clouds. Besides the living arrangements, “Meths” are also able to create and purchase clones of themselves or a body they prefer. This world is deeply entrenched in the economic hierarchy, though it is one of the few social conflicts within the show.

Takeshi Kovacs, the main character of the show, is brought back to life after spending 250 years on ice — a typical punishment for criminals. Kovacs’ stack was placed in a new sleeve, played by Joel Kinnaman, but through flashbacks we also see Kovacs’ past sleeve, who is played by Will Yun Lee. Like many others, Kovacs’ sleeves are vastly different from one another. Despite Kovacs’ criminal history, he is re-sleeved and taken to the person who actually bought his Get Out of Jail Free card.

Kovacs was taken off ice by one of the exclusive and insanely wealthy “Meths,” Laurens Bancroft, played by James Purefoy. Through Bancroft, Kovacs is thrown into a deadly murder investigation, starring Bancroft as the victim. Wishing to solve his own murder, Bancroft hires or holds onto Kovacs’ freedom until Kovacs discovers who killed him. As Kovacs delves into the puzzle surrounding Bancroft’s murder, we begin to unravel the world and its occupants around Kovacs.

One character we meet earlier in the show is Poe, played by Chris Conner. The shotgun-toting artificial intelligence runs the hotel called “The Raven” that Kovacs stays in for the duration of season one. And yes, by Poe they mean Edgar Allan Poe. It is a nifty little token of the past in this futuristic world.

The first couple of episodes introduce a number of characters, including Poe and the Bancrofts, but also members of the police force and the U.N.’s Protectorate. Martha Higareda plays Kristin Ortega, a police detective who immediately takes an interest in Kovacs. Whether it is from his criminal history or something else is left for the later episodes. Bear with Ortega in the first couple episodes as she can be a bit much, but her character will grow on you.

Through Ortega and her family, the show explores the religious ramifications of the process of moving the human consciousnesses from body to body. In this world, Catholics oppose the process of re-sleeving and protest against eternal life that is now available to everyone. It is an interesting conflict that affects Ortega and others and is a highlight to the background themes of the show.

In later episodes, through the use of flashbacks and other scenes, you will be introduced to Kovacs’ sister, Reileen Kawahara, played by Dichen Lachman, and the infamous character Quellcrist Falconer, played by Renée Elise Goldsberry. I cannot say too much on these characters as they are important to the plot but you will be in for one hell of ride as you get further into the season.

“Altered Carbon” is a show in a vibrant but gritty futuristic world with such rich details and complex characters, you will not be able to stop watching. Exploring deep, conflicting themes of society and human nature through diverse and elaborate characters, “Altered Carbon” takes you on a wild ride through the dark and cyberpunk world of Takeshi Kovacs.