This past December, Allegheny College announced the hiring of its first ever field hockey coach, Valerie Lohr.

Coach Lohr played collegiate field hockey at Lehigh University and has coached numerous teams at the high school and college levels. Her various experiences brings a vast amount of knowledge to Allegheny. 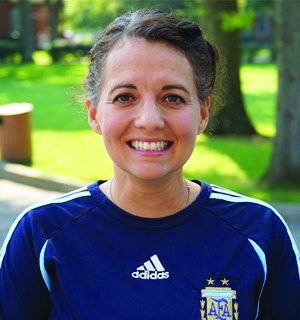 Lohr brings years of field hockey experience to Allegheny, starting to play herself at the age of 12 and coaching for over a decade now.

“I am a United States certified Level 1 coach and I’m finishing my Level 2 in March … I’ve had a lot of really great mentors and coaches that I’ve worked with and worked under … I’ve worked with the number one  player in the world, Jamie Dwyer,” Lohr said.

Lohr is now tasked with a challenge that spans far beyond X’s and O’s, recruiting an entire team from scratch.

The Gators are set to take the field in 2019 to begin play, so recruiting is Lohr’s top priority this spring.

“I’m finding [new players] and bringing them home, they just don’t know this is their home yet,” Lohr said.

Lohr not only looks to be successful on the field, but believes off-field activities such as philanthropy and team building will allow the program to make an impact in areas other than the scoreboard.

“We want to do a lot with philanthropy. I’m really big on them learning that they have to give back. I’m planning a trip to Argentina in three years … doing an orphanage visit, playing with the kids.”

Allegheny is the eigth college in the North Coast Athletic Conference to add field hockey, which some feel is long overdue.

“a lot of liberal arts colleges like Allegheny already have field hockey programs, so it’s good that their adding it now,” Bailey Landis, ’18, a club field hockey executive board member said.

Recruiting a team from scratch is a daunting task, but the prospect of playing field hockey at Allegheny is already attractive to prospective students, according to Cecily Milligan, ’18, an Allegheny Admissions intern

“This month we’re highlighting the new sports … and [prospective students] are really excited that there are more options,” Milligan said.

Lohr believes that the combination of Allegheny’s reputation as a high quality academic institution and the opportunity to make history will make it easier to attract players to join the program.

“Here’s a place you can come, get an excellent education, be a part of that unique combination, and set records, because they don’t exist. Everything this first team will be doing will be in record books. Your name will go down in history,” Lohr said.