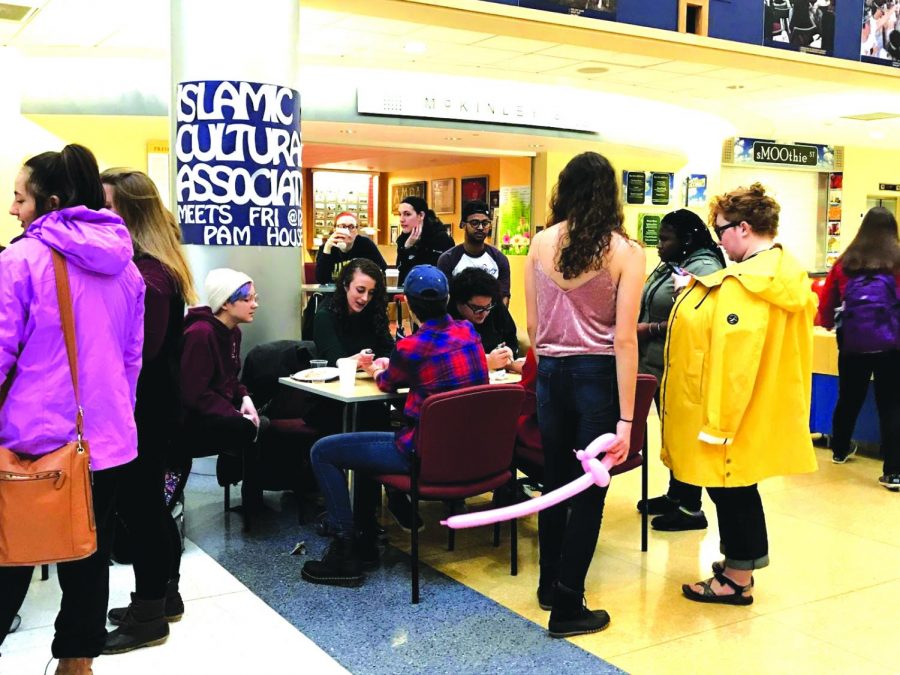 Students receive Henna from members of the Islamic Cultural Association at the Midwinter Festival in the Henderson Campus Center on Saturday, Jan. 27, 2018.

Spiritual and Religious Life Week, formerly called “Faith Week,” started off its inter-religious week with the Midwinter Festival in the Campus Center Lobby. Bringing together all of the religious groups and organizations on campus, SRL Week, starting on Saturday, Jan. 27 and ending on Friday, Feb. 2, explores themes of justice, including racial, social and environmental justice.

The leading organization behind the religious week is the Meaningful, Open, Spiritual and Interreligious Collaborative, formerly called the Interfaith Fellowship.

“We needed a more inclusive [name], as not all groups identify with the word ‘faith’,” Hannah Hart, ’19, said.

Hart is the president of MOSAIC and, along with the group, helped coordinate the festival and the rest of the justice-themed week.MOSAIC, Hillel, Islamic Cultural Association, Fellowship of Christian Athletes, Allegheny Christian Outreach, Newman Catholic Ministry, Allegheny Community for Earth-Based Spirituality, and Sojourners Christian Fellowship participated in the festival.

At the festival, each organization had a specific craft or activity pertaining to their religion or belief system. Hillel’s table had the planting of lavender, parsley and chives for Tu B’Shevat Seder, a Jewish religious holiday meaning “New Year of the Trees.” ICA arranged a table for Henna; the Newman Catholic Ministry had a craft table for making St. Brigid’s crosses; and the Sojourners were making balloon animals. The MOSAIC table included a craft table for the making of snow globes as well.

The theme of SRL Week this year was “‘Just Us’ for Justice.” The goal for the week was to raise awareness for justice issues. Individual religious group have organized social events being held over the course of the week in relation to the theme. Racial and environmental justice were the main topics of the week’s events, including topics such as, “How Sports Teaches Us Justice” or “Environmental Justice and the New Year for Trees.”

An event led by ACO included guest speaker, Herb Bailey, the executive ministry director of Uncommon Grounds Cafe in Aliquippa, Pa. Topics such as racial justice, often considered controversial, were going to be discussed at the event according to Will Crosby, ’21.

“It’s a topic everyone is afraid to talk about. And as a Christian group we think it’s important to talk about,” Crosby said.

A big part of the SRL Week is that the groups and organizations are hoping to reach out to not only religious members of the campus community, but also students who are not involved in religious life on campus.

“We want everyone to come, not just Christian groups,” Essence Suggs, ’20 said.

With SRL Week and its theme of “Just Us for Justice,” MOSAIC and the other religious organizations aimed to spread awareness and spark conversations on the various topics of justice that affect the religious community and the rest of society.