Simonetta fulfills dream of playing and pushes herself to become stronger 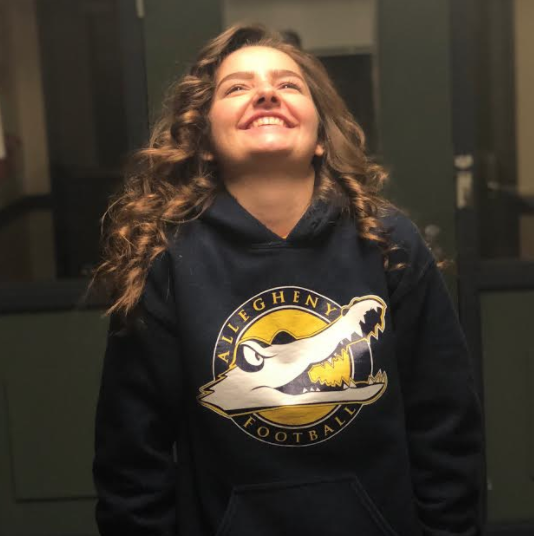 As the Allegheny College football team begins intensifying their early-morning workouts to prepare for the 2018 season, there is a new face joining them in the gym — and soon, the field. Samantha Simonetta, ’21, brings a new perspective to the team as the first female football player in recent history.

Although Head Coach B.J. Hammer is unsure if Simonetta is the first female football to ever join the team, there appears to be no record of any such event happening previously.

“I always wanted to play elementary football. Something attracted me to football.

In high school, I wanted to play, but then I played soccer for two years. I got to college and I was watching the games and I was like, I really want to do this, because this is my chance to do this,”  Simonetta said about her motivation to join the team.

Interested in the program and determined to pursue a lifelong dream, Simonetta reached out to Hammer.

“She was interested in playing. There are a lot of female football players out there. I said, the way you can play is you have to go through the same process our guys do, by doing all of our conditioning, late weight training.  If you do that, you’re good to go,” Hammer said.

Although the team has only had about a week of practices and conditioning since the start of the semester, Simonetta said she is happy with her decision and feels accepted by the team.

“The teammates are really helping me out a lot and encouraging me,” Simonetta said, crediting her fellow kickers and snappers for both welcoming her and encouraging her to work hard to hone her skills.

Although Simonetta is entering unfamiliar territory as a female player on the football team, the expectations from the coaching staff and veteran players remain the same for her as they do for any newcomer to the team.

“Since she is working to become a specialist like I currently am, I have high hopes for her and expect her to work hard,” Mikey Spurr, ’20, a fellow kicker on the team, said.

Like Spurr, Hammer is holding Simonetta to the same expectations as any other player, regardless of gender.

“If she goes to work and works hard everyday, it doesn’t matter.  That’s the key thing.  Doesn’t matter if you’re female, we want you there and working hard. That’s what we are about,” Hammer said.

As for Simonetta, she is excited to embrace this new experience while also setting goals for herself.

“I just want to push myself, become stronger, and help score some points,” Simonetta said.