Old news, different faces: Streep, Hanks and Spielberg make ‘The Post’ their own 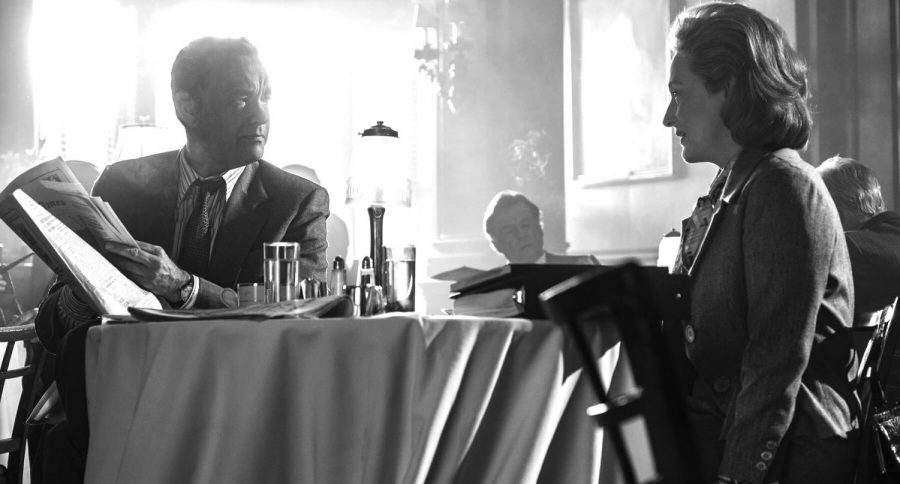 Extra! Extra! Read all about Director Steven Spielberg’s perfectly timed political thriller “The Post,” and then go see it on the big screen because this film could not be more relevant in today’s “fake news”-filled culture.

Surrounded by a thick cloud of cigarette smoke, Meryl Streep and Tom Hanks bring The Washington Post’s struggle to become a prominent news outlet and its race against The Times to publish the secrets that prove the American government lied to its citizens about the Vietnam War to life, launching the war between Richard Nixon’s administration and Ben Bradlee’s newsroom in the process.

Filled with the constant sound of typewriters and an endless supply of coffee, Spielberg’s movie is a film with an uncanny similarity to today’s political climate and accurately portrays the realities of a newsroom.

“We need the principled press to hold power to account, to call [President Donald Trump] on the carpet for every outrage,” Streep said during the 2017 Golden Globes.“That’s why our founders enshrined the press and its freedoms in the Constitution.”

One year later, Streep’s performance is anything but overrated as she takes on the role of Post Publisher Katharine Graham and brilliantly shows her struggle to maintain personal relationships with D.C. officials while also trying to establish herself as a professional woman after inheriting The Washington Post from her deceased husband.

While it was strange to see Streep portray an unsure woman, her character invites audiences into the newspaper world, showing viewers that it is a business with a need for funds, but also a necessary institution with a duty to inform the American people.

While the film does a wonderful job at establishing Graham as a nervous woman, it was painful to sit and wait for her to find her voice. But when she does, the outspoken Streep shines through and gives voice to women everywhere.

Hanks’ portrayal of Bradlee is everything that an editor should be. He is decisive, driven and brave as he carries out his mission to report the news, rather than read it in competing newspapers like The New York Times.

Bradlee acts as Graham’s opposite, urging her to print hard, controversial stories and to stop worrying about burning bridges with her political friends.

“We cannot let the administration dictate what we can and cannot print,” Ben Bradlee says.

Dressed in a lavish evening gown, Graham’s character leaves her own dinner party to take a phone call where she becomes the deciding vote and orders the controversial story to be printed on the front page, ignoring the legal and financial implications the newspaper may face.

The film’s dialogue is quick, informed and spunky as Bradlee makes it clear that his duty is to be honest and loyal to journalistic integrity. The actors show what journalism should be as the characters willingly risks their careers in order to report the truth.

“To make this decision—to risk her fortune and the company that’s been her entire life — well I think that’s brave,” Tony Bradlee says.

Spielberg makes a point to showcase the complexity that comes with sources and personal relationships. Hanks gives voice to Bradlee’s friendship with the Kennedy family, recounting a story of a grieving Jackie hugging Bradlee’s wife and telling him that “none of this ends up in your newspaper.”

Graham battles it out with Bruce Greenwood, who plays former United States Secretary of Defense Robert McNamara, when she decides to publish the story even though it exposes her friend as a liar.

Not only does “The Post” take a political stance, it also makes a feminist statement in which Graham makes a choice between hosting dinner parties and serving the greater good.

The film ends with Bradlee and Graham walking through the printing presses and discussing their hope for the newspaper. The scene then cuts to a window looking into the Oval Office. Richard Nixon is on the phone telling an official to never give a reporter from The Washington Post press credentials while he waves his hands theatrically in a heated rant that resembles those given by Trump today.

The screen goes dark and cuts to a scene at the Watergate building, foreshadowing the next front page scandal.

Although the film ends there, it is no cliffhanger that The Washington Post broke the news about Watergate in a series of stories written by Bob Woodward and Carl Bernstein — proof that being denied credentials will not stop a newspaper from uncovering fraudulent officials.

Spielberg’s cast could not have done a better job portraying the suspense and the reality of reporting news — the first draft of history — but much can be learned from this historical film.

“The Post” defends journalism but shows it is an institution run by humans who make mistakes.

“We don’t always get it right. We’re not always perfect,” Graham says to Bradlee. “But I think if we can just keep on it, you know? That’s the job, isn’t it?”

Films like “All the President’s Men” and “Spotlight” are joined by Spielberg’s thrillingly powerful drama. It is a timeless and much-needed film that calls attention to the tainted drafts of history that have continued to be repeated and will continue to be reported on by the press until real change occurs.