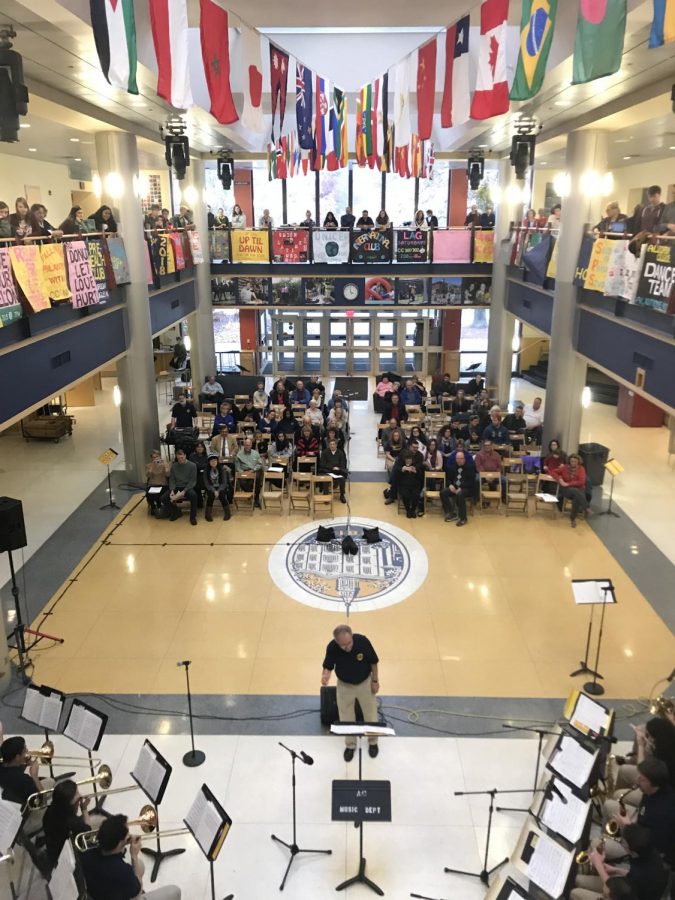 Students flow in and out of the Henderson Campus Center every day, often listening to music on their headphones as they get food from McKinley’s Food Court, head up to Grounds for Change for some coffee or check their mailboxes. On Sunday, Nov. 12, the Allegheny College Jazz Band performed a live concert in the campus center lobby.

Music Instructor and Professor Stephen Corsi has directed the jazz band since 2013 and said the biannual concert, which acts as a final for Music 114, has always been held in the campus center during his tenure at Allegheny.

The restless traffic in the campus center lobby may make other musical groups hesitant from performing there. However, Corsi feels it’s beneficial to hold it there, compared to an auditorium, because of the size of the band.

“With a [traditionally] smaller group, like the jazz band, you don’t want it to be un-nerving to the performer playing in an auditorium, and you’ve got like 40 people sitting out there,” Corsi said. “We talk about focus, and also with the style of music we’re doing … we’re doing more popular things, and just talking to the kids in the band, they’re ok with people walking around.”

The concert attracted more than a couple dozen people, as 84 seats provided in the center of the lobby were filled. Many students also gazed down from the railings on the second floor to appreciate the classic pieces including “Groovin’ Hard” by Don Menza, “Spinning Wheel” by David Clayton Thomas and “The Way You Look Tonight” by Dorothy Fields and Jerome Kerns.

The concert featured a total of nine songs, picked based on factors, such as ability level, number of students in the band and instrumentation of the musicians.

“You have to pick the music level appropriately around the group,” Corsi said. “We try to do jazz, swing, ballad slower pieces, and we try to do funk and rock.”

This semester, 21 students showcased their talents through a number of different instruments including trumpets, trombones, piano, drums and guitar.

“I really enjoyed playing ‘Groovin’ Hard’,” Elijah Morsha-Taylor, ’20, said. “It’s over all just a really groovy and hard hitting song, and then I really liked both of the vocal pieces, which were ‘How Deep is the Ocean How High is the Sky’ and ‘The Way You Look Tonight’.”

No matter what songs are played, members of the band stress the importance of working well together and having good chemistry, according to Morsha-Taylor and Alison Celigoi, ’19, who performed solos during both vocal pieces.

“I think we definitely do play well together as a whole once we’ve worked everything out. With so many people sometimes it’s hard to get everyone in sync, but when we are in complete sync it’s really good,” Morsha-Taylor said.

After an hour-long performance, the musicians bowed and expressed their appreciation for all who came to listen. Corsi, and other members of the group were pleased with the outcome.

“There’s a lot of good chemistry between the members and they seem to balance each other really well,” said Alison Celigoi, who performed solos during both vocal pieces.

“I’m always amazed by looking back at them and listening to them because they’re such a talented group of people,” Celigoi said.

The concert serves as the final exam for members of the jazz band. Now, the band will begin a tour around Crawford County beginning on Dec. 4, 2017.