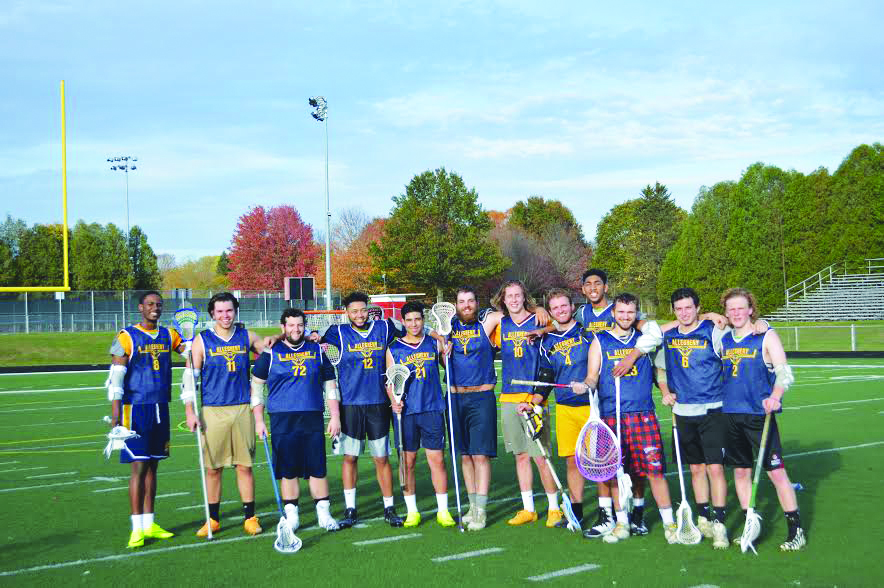 The men’s lacrosse club team poses for a photo after its game on Oct. 29, 2017 at Edinboro University.

Currently, over 400 student-athletes represent Allegheny College on varsity athletic teams in the North Coast Athletic Conference, and the number of varsity athletes is expected to expand with the addition of women’s field hockey and men’s lacrosse to the athletic program.

The Allegheny College Board of Trustees, in an effort to increase student enrollment has authorized the addition of women’s field hockey and men’s lacrosse programs to the college’s varsity athletics department.

“I am very excited by the news that Allegheny will be getting a varsity lacrosse team,” said Brian Rogers, ’18. “While I’m disappointed that I won’t have the opportunity to try out for the team, I know that it means well for the club team.”

“As Allegheny develops a reputation for lacrosse, men who come to Allegheny for the sport and don’t find that varsity level fits into their timetables, will likely join the club side,” Rogers said. “I would be willing to bet that the club team will increase in size and also increase in talent.”

Women’s field hockey will debut as a varsity program in the fall of 2019, while the inaugural season of varsity men’s lacrosse will be in the spring of 2020.

Allegheny will now support 23 varsity athletic teams and the college will also begin to compete in every sport sponsored by the NCAC. With the introduction of the lacrosse program, all 10 NCAC member schools will now offer men’s lacrosse.

“I was not consulted as to how the acquisition of the team would work, but I did have conversations with Bill Ross [director of athletics] and a few members of the board while they were considering a varsity men’s lacrosse program,” Rogers said. “I heavily encouraged Allegheny getting the team because I felt that it would be a valuable addition to the school and is something the club team has always wanted.”

Along with the addition of two new varsity programs, the Allegheny Board of Trustees also authorized construction of a new artificial turf field at the Robertson Athletic Complex. The men’s and women’s locker rooms and the athletic training facilities at the complex will also be renovated and enhanced.

These new and renovated athletic facilities will be enjoyed by varsity athletic teams beyond the college’s two most recent additions, including women’s soccer, women’s lacrosse, men’s baseball and men’s football.