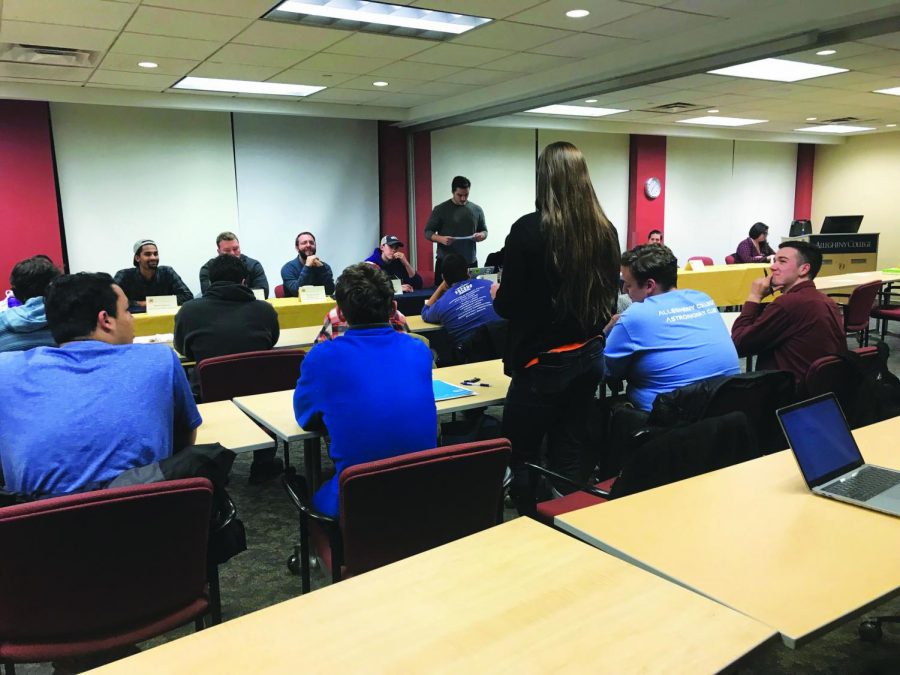 Allegheny students may soon be able to declare a future, along with majors and minors. During its meeting on Tuesday, Oct. 31, Allegheny Student Government discussed the possibility of the college developing a futures program.

The idea of declaring a future was first brought up during a summer workshop program, and the futures program will work with The Allegheny Gateway to allow students to declare one of five futures, according to Chief of Staff Stella Pratt, ’18. Although the futures have not yet been chosen, the options will be for broad career topics, such as a Future in Justice.

Director of Sustainability and Environmental Affairs Akeem Adesiji, ’20, said his Freshman Seminar 201 class had been discussing the future idea.

“In the past, our parents might have gone to school with a specific career in mind and have that job for the rest of their life. Now, students are not necessarily focused on the career they want to go into, but the kind of work they want to go into,” Adesiji said. “What they’re trying to do with the futures program is have some sort of [guidance] to help people figure out what kind of jobs they can do that will fulfill those desires.”

If the program is approved, it will be developed over the summer of 2018, according to Pratt. The futures will provide students with aid from staff who can help them reach a certain goal.

“It will be something that will make Allegheny stand out compared to other schools,” Pratt said.

Along with the idea of declaring futures, ASG discussed possible developments that would affect other parts of the college, including clearer Loop schedules and sustainability additions to dorms and other campus-owned buildings.

“We’re considering adjusting how the Loop operates by making it more accountable and publishing what the route … is,” Co-Director of Student Affairs Travis Court, ’18, said.

“[We got] an interesting document today from Wesley College about the policy for decorations for holy days, so that’s going to be an upcoming dialogue,” Gladden said.

A third policy the Campus Life Committee discussed was more flexible meal plans, which includes the introduction of a meal plan at McKinley’s Food Court that gives students a number of swipes rather than MUNCH Money. One swipe would buy a sandwich, bag of chips and drink, according to Gladden.

Along with the possible changes to meal plans, sustainability additions to campus-owned buildings could include water bottle refill stations and motion sensing lights, which were voted the top two choices in the energy challenge survey, according to Adesiji.

“I know that more water bottle refill stations will be coming, and we might split the money between water bottle refill stations and motion sensing lighting. There are some academic buildings left lit the entire day and all through the night, so looking at buildings like that … and putting motion sensing lights in there would do a lot of reduce electricity consumption,” Adesiji said. “If it’s feasible to do both, we’ll look into that.”

Along with talking about policies and technology, ASG swore in their newest Class of 2020 senator Ashley Leonard, who is taking recently appointed Director Of Communications and Press Elyse Cinquino’s place.

Once Leonard was sworn into the senate, the meeting closed with a discussion concerning ASG’s Title IX resolution.

“Last year, we had another Title IX Resolution. This is more of a continuation of that,” President Mark MacStudy, ’18, said. “Last year was more [about] pointing out the problem. This is addressing it a little bit more.”

With the new resolution, ASG hopes to be able to work with other clubs to coordinate events such as an It’s On Us campaign or bringing a speaker to campus to talk about sexual assault and harassment, according to MacStudy.

“I want to use this as a way to build cooperation,” MacStudy said. “I would like to be able to work with these clubs a little bit more, and I feel like this is one way to start working with a more niche group and to hopefully expand from there as well.”

ASG is also considering setting aside part of its yearly budget for the resolution’s campaign and events, according to MacStudy.

MacStudy hopes to have a finalized report on the new Title IX resolution next week. One of the more important points of the resolution to him is the message it will send to Allegheny’s administration.

“[It’s about] reiterating that we are always here and ready and willing to work with the administration to make our community safer for everyone involved,” MacStudy said.