Why Not Us promotes domestic violence awareness 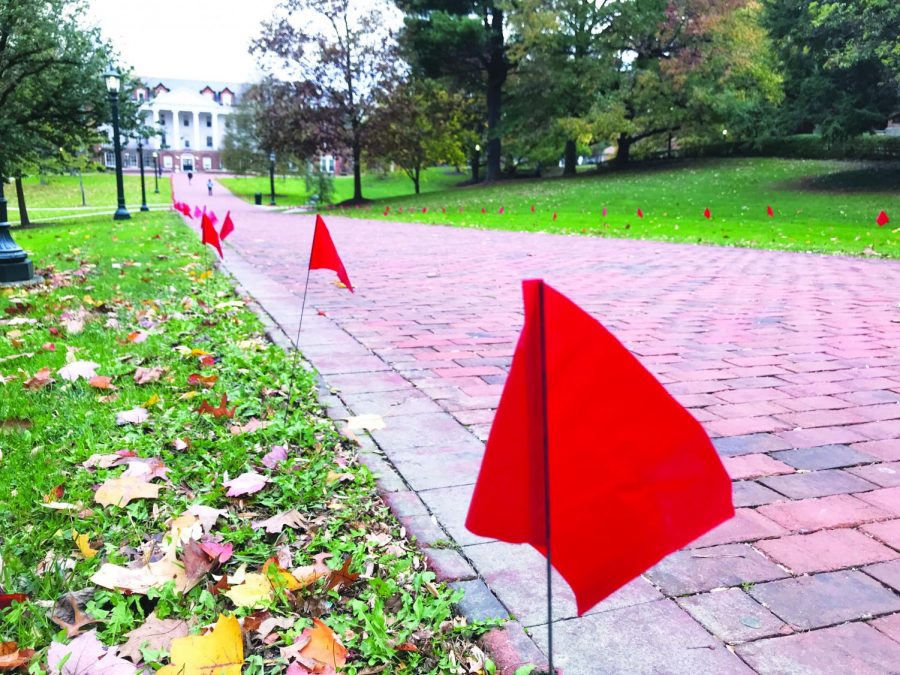 The flags placed by Why Not Us? to bring attention to Domestic Violence Awareness Month stand on Brooks Walk on Tuesday, Oct. 31, 2017.

Why Not Us, a new organization on Allegheny College’s campus, kicked off its first event of the semester on Oct. 29th, titled The Red Flag Campaign.

Mark Myers, ‘19 and Anna Meyer, ‘20, collaborated to launch Why Not Us at the beginning of the 2017 fall semester.

“I had been talking to [Title IX Coordinator] Gilly Ford  since my freshman year about starting an organization like this and after receiving paperwork from an older group called Allegheny College Coalition Against Rape, I decided it was time to draft a constitution,” Myers said.

Why Not Us was based on another organization called It’s On Us, a national movement that focuses on ending sexual assault, according to Myers.

“Gilly Ford and I decided a different name would be appropriate and I had also found out that Anna Meyer had recently handed in a similar constitution,” Myers said. “Neither one of us had any idea the other was doing this.”

The organization was created in order to educate the Allegheny community about “the sexual violence and rape culture that affects all members of the community” according to its website. They plan to not only educate, but engage, empower and collaborate with the campus as well.

The Red Flag Campaign was the organization’s kick off event. Club members collaborated with students from the Reproduction Coalition, Young Feminist Leadership Alliance and the brothers of Phi Gamma Delta. Members of each organization lined Brooks Walk and Senior Circle with over 500 small red flags to represent survivors and victims of domestic violence.

“We went out at 9 p.m., Monday night and about 25 people showed up,” Myers said. “We wanted people to wake up first thing Tuesday morning and go ‘oh wow’ at the sight of the flags.”.

Between placing the flags and writing on the bricks with chalk, it took around two to three hours to complete, according to both Myers and Meyer.

Meyer, the attorney general of Why Not Us and resident adviser of Edwards Hall, emailed residents about the campaign to try and gather more people.

“Setting up was a lot of fun, a lot of FIJI’s turned up along with a couple of my residents,” Meyer said. “My residents have been coming to the meetings so it’s great to see them involved.”

Meyer also received a lot of positive feedback from the Allegheny community with many asking questions on how they can get involved.

During The Red Flag Campaign, Why Not Us started the Consent Campaign where they videotaped 50 students and asked them to define consent and explain what consent meant to them.

“We made sure to explain what the red flags represented after interviewing the students,” Myers said. “I think some people were confused about the red flags when the chalk washed away, but the flags still made a statement.”

Carolyn Kirby, ‘20, a member of Alpha Chi Omega whose sorority advocates for awareness surrounding domestic violence, agreed that the flags made a statement.

“Why Not Us reached out to Alpha Chi before they started the campaign so we were aware of it beforehand,” Kirby said. “We weren’t part of this event, but it was definitely a good campaign and we’re always talking about getting involved with other organizations who support the fight against sexual assault.”

By Nov. 1 all 500 flags had been removed from Allegheny’s campus with the rain washing away any chalk that had been present.

Why Not Us plans on reusing the flags to recreate the event in the future, but hopes to make it even bigger and potentially include professors as well, according to Meyer.

“In the future we want to line all of the walk ways on campus. We want students to become aware about sexual assault and domestic violence,” Myers said. “Why Not Us is more about education if anything. It’s not for protests and we’re trying to seek more collaboration with our campus.”