Remembering Sheehan as ‘a mentor, colleague, leader and dear friend’ 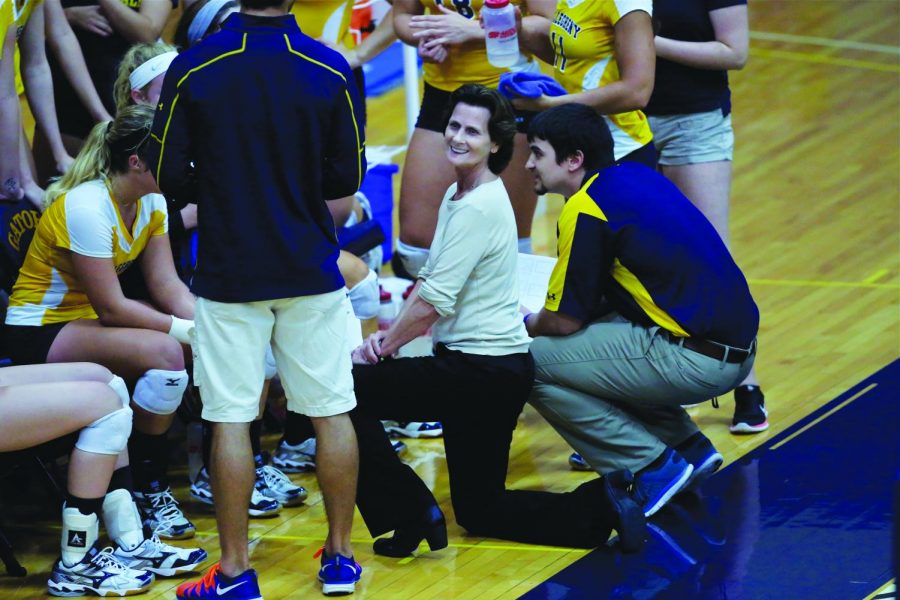 Coach Bridget Sheehan smiles in a huddle with her team during a volleyball game against Grove City College on Sept. 9, 2015.

James Mullen, president of the college, announced the news of Sheehan’s passing in a campus-wide email.

“Our community has lost a trusted mentor, devoted colleague, insightful leader and dear friend in Bridget,” the email said. “We mourn her passing as we remember and celebrate the tremendous difference she made.”

Sheehan was one of 25 coaches in National Collegiate Athletic Association Division III history to win more than 600 games.

“She earned respect and admiration on our campus and across the nation not only for her achievements as a coach, but also for the integrity that defined her,” the email said.

Terra Schall, ’18, said she first met Sheehan when she visited Allegheny during her junior year of high school. She has played volleyball for four years at Allegheny.

“She expected a lot from us and had high standards for us,” Schall said.

Karissa Welker, ’18, remembers seeing Sheehan during a campus visit with the volleyball program during the fall of her senior year of high school.

“She was the first person to greet me when I got on campus,” Welker said.

“She would just be in her office all the time,” Welker said. “She was always able to just be there and talk to you.”

Welker remembers Sheehan was very interested in the lives of her players, though she didn’t always understand their jokes.

“We would tell her [what we were joking about], and she would be like, ‘okay’, that was her signature.” Welker said. “She never thought it was funny, she didn’t understand why we were all laughing so hard. That was probably the funniest thing. But she was so invested in our lives. She wanted to know what we were talking about, what was going on, different things like that.”

“If we weren’t there two hours early, we were late,” Welker said.

She pointed to one match against the College of Wooster as an example, when the team bus got stuck in rush hour traffic. Sheehan tried to exhort the driver into going faster.

“She was like literally almost sitting on the bus driver’s lap,” Welker said.

Despite Sheehan’s best efforts, the traffic made it difficult for the bus to move. Sheehan was still very intense, though.

“She was like having a panic attack at the front of the bus,” Welker said.

Leah Franzluebbers, ’18, said she remembered playing in the game which would become Sheehan’s 600th win.

“My freshman year, our first tournament, we won our first match, and that happened to be her 600th win,” Franzluebbers said. “And so that was a pretty big moment for her, and us as a team, because it kind of signaled a turning point, because the past few years, Allegheny volleyball hadn’t been very successful, and then we went on to have a really great season.”

Franzluebbers remembers visiting Allegheny the summer before her senior year of high school and being struck by Sheehan’s intensity.

“We were walking up the stairs to her office, and she goes ‘you know, we run these stairs,’ and I was so intimidated, because they’re four floors of stairs, and she just went on about all the conditioning the team did, and all the running, and all the stairs,” Franzluebbers said.

Sheehan graduated from Slippery Rock University in 1977. She coached at Allegheny since 1986, and became the winningest coach in school history with a 635-484 career record.

“Since coming to Allegheny as the head volleyball coach in the fall of 1986, Bridget Sheehan has built one of the most successful NCAA Division III programs in the country,” according to her biography on the college website.

Yet Sheehan’s players said she was far more than her statistics.

“Coach Sheehan was a fabulous coach, like so many accolades, and that’s really what you hear now about her, and sure, that’s important and all that, but you know, everyone on the team, we all knew her, it was more than her accomplishments. What mattered to us was how much she cared about us,” Franzluebbers said. “So that’s what I think is most important about the legacy she left behind, is that the players that she had, she developed not only as players on the court but as people, and, I think that’s in many ways more important than her win-loss record or how many times she went to the NCAA Tournament.”

“There’s so many good memories of her,” Welker said.