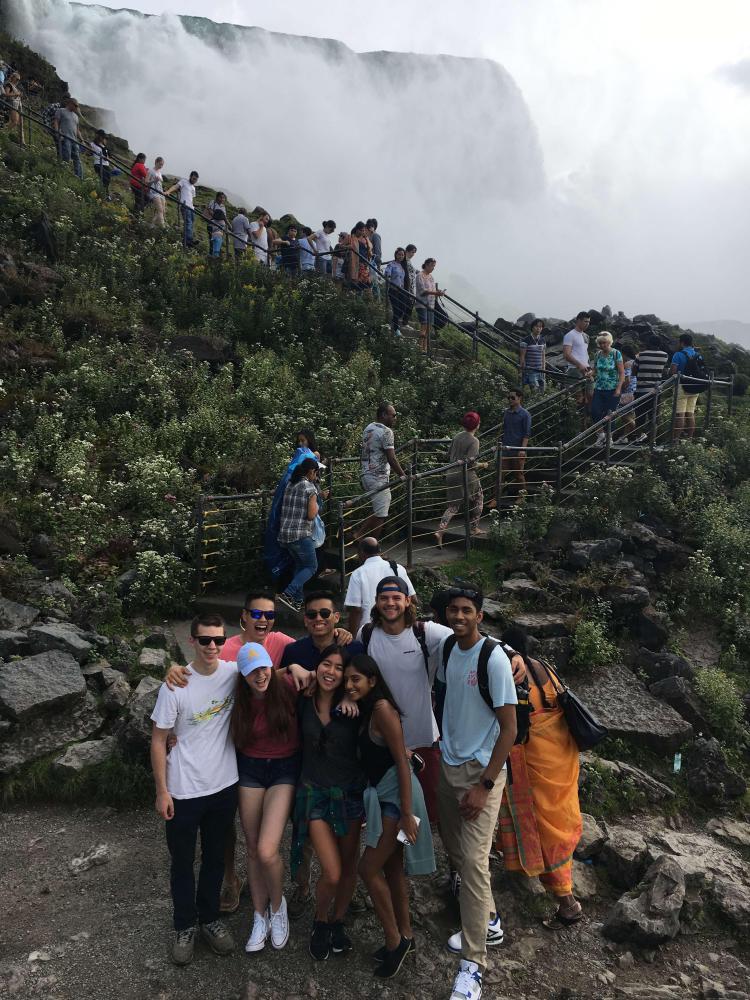 Members of the Allegheny College International Club traveled to Niagara Falls on Saturday, Sept. 16. The trip was the club’s first official outing of the 2017-2018 academic year.

“Every year we host a trip to Niagara Falls during the fall semester because most of the international students who come to America are very excited to see Niagara Falls, the eighth wonder of the world as they say,” said Shashank Shrestha, ’19, International Club president.

Shrestha, an international student from Kathmandu, Nepal, said 28 students went to the American side of Niagara Falls this year where they experienced Horseshoe Falls on the Maid of the Mist Boat Tour and explored scenic walkways.

Matthew Baldeosingh, ’20, joined the International Club a few days before the trip.

“It’s good to see that there’s a club that offers space for people of different backgrounds,” Baldeosingh said. “Being someone who’s not international, from Brooklyn, New York and been in America all his life, it’s great to get that interaction.”

The International Club hosts biweekly meetings in the Henderson Campus Center as well as weekend trips, according to Shrestha.

“This is the first time we’re trying to do events every single week,” Shrestha said.

International Club students also traveled to Pittsburgh for the Chinese Cultural Festival on Sunday, Sept. 17. Shrestha said upcoming trips are not finalized but could include New York City and International Community Day in Cleveland on Oct. 8.

Shrestha said international students are planning to have a formal this year, which is something new for the club, and the club will host its main event — the annual International Dinner — on Nov. 19.

These trips and events provide opportunities for international students to learn about and experience more of the United States, according to Shrestha.

Shrestha is also a mentor for the Culture 2 Culture Peer Mentoring Program, which pairs international students with student mentors who apply for the program through the International Education Office.

“Culture 2 Culture is about helping the international kids so they don’t have a hard time on campus,” Shrestha said.

Mentors meet with their mentees at least once a week during the fall semester to check in with one another, go to an event or share a meal, according to Shrestha.

“I didn’t have a mentor because I came here during the spring semester of 2016,” Shrestha said. “But when I see my mentees it’s very useful for them because they know the people I know and they start becoming friends.”

Shrestha said after the fall semester, mentors will no longer be officially partnered with their mentees. Andrea Jonsson, ’21, said this does not mean international students will be on their own.

“I came from an international school so for me it’s what I know, it’s kind of comforting,” Jonsson said. “But for other people I guess it’s just more exposure — you get to learn more about the other cultures and different views … I’m also an American citizen, so for me I know what to expect, but for those who don’t know what to expect it’s really nice.”

Jonsson also attended the Niagara Falls trip with Shrestha and Baldeosingh. She said she has visited Niagara Falls in Canada, but the Sept. 16 trip was the first time she visited from the United States.

“It’s one of the major sites to see, so it was really nice to go,” Jonsson said.