Gator football falls to Wooster in first loss of the 2017 season, home opener 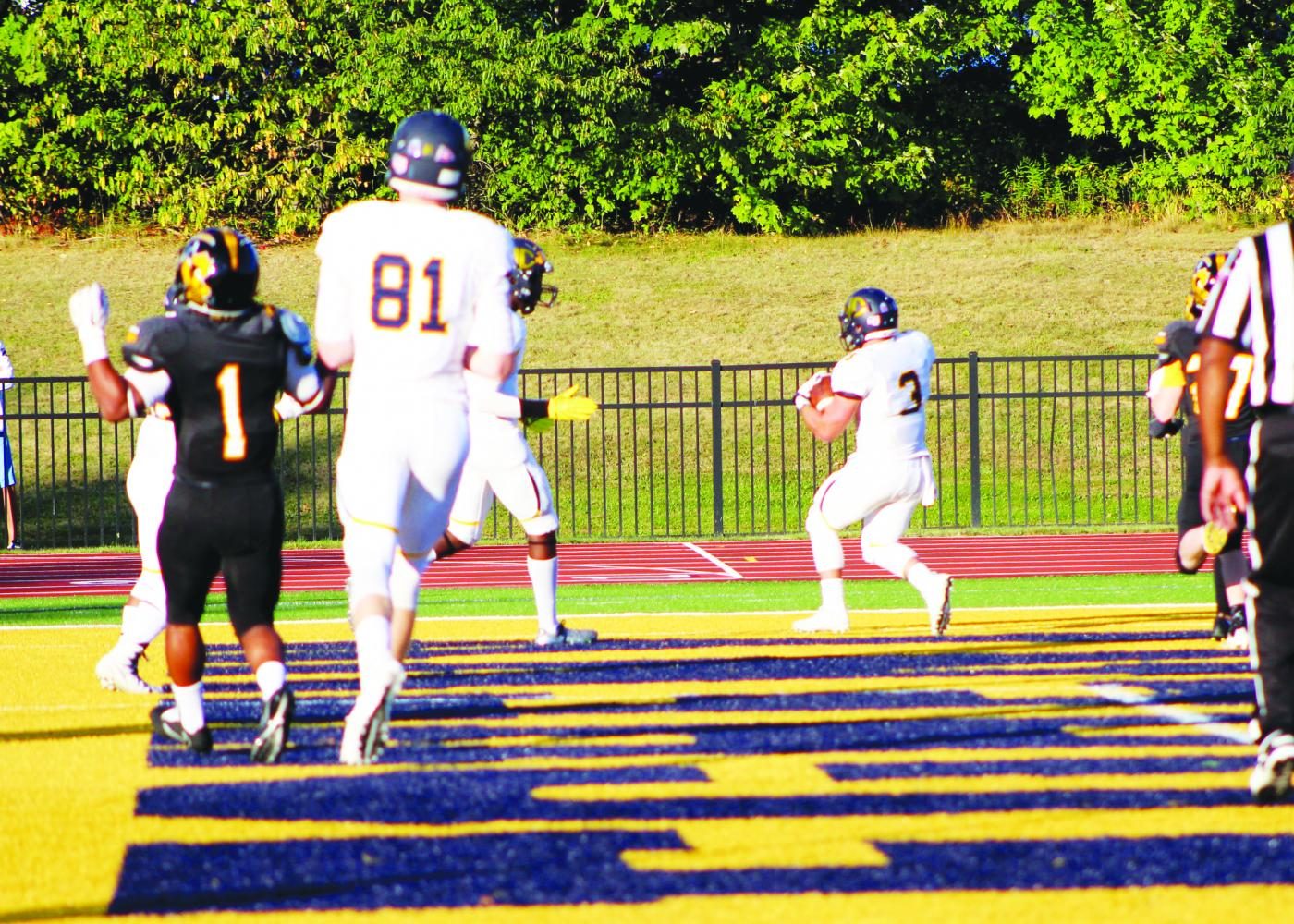 Jake Wilson, ‘18, carries the ball in for a touchdown at the beginning of the third quarter.

The Allegheny Gators football team fell to the College of Wooster in its home opener on Saturday, Sept. 9 with a score of 49-35, giving the team one win and one loss for the season so far.

To start the game, Alex Victor, ’20, received an 85-yard pass from Gator quarterback Logan Lee, ’19, to score the first touchdown of the game, putting Allegheny up 7-0.

Victor was named Offensive Player of the Game for the second week in a row this season.

“I really appreciate the recognition, but it should be more of an offensive award in general. It’s all about the whole team buying in, not just the individual,” Victor said.

Victor also credited Lee with his success in this past weekend’s game.

“I also want to give credit to our quarterback,” Victor said. “He has the hard part. He has to throw the ball, I just have to catch it.”

Wooster responded soon after and the Gators and Fighting Scots traded touchdowns ending the first half with Wooster up 28-21.

The Gators came out strong in the second half with a touchdown pass to Jake Wilson, ’20, to tie the game.

“It was a hard fought battle between Wooster and us,” Victor said. “It was more of a shootout offensively and they had a couple more plays than we had so they had the upper hand and won.”

Wooster retaliated with 3 touchdowns by the beginning of the fourth quarter and the Gators had a costly turnover right before halftime.

“We missed a lot of assignments on defense and need to execute jobs as individuals and specific assignments instead of worrying about everyone else and the bigger picture,” Victor said.

“Penalties are mentally tough, but we worked through them well. Ultimately, we need to limit those and win the fourth quarter,” Riley said.

To finish the game, the Gators scored their final touchdown with a pass to Austin French, ’21, ending the game with a score of 49-35 in Wooster’s favor.

Overall, Lee completed eight of eight passes for a total of 135 yards and two touchdowns.

“As long as we don’t get too ahead of ourselves and don’t let distractions get in our way, we can have a good season this year,” Victor said.

This season could be different than previous seasons, according to Victor, due to training in the weight room in the offseason and everyone buying into the system.

“We had a lot of injuries last year, so working in the weight room improves our physicality and keeps us healthy,” Victor said. “The coaching staff is playing into a lot of our success this year too.”

Riley said some injured players from last season are still out.

“Football is a violent sport so there is no real way to limit injuries,” Riley said.

This season might be different from previous seasons Riley pointed out.

“I think we are going to surprise a lot of people,” Riley said. “We can bounce back from losses better than in previous years and beating Thiel has really boosted our confidence.”

Allegheny students attended the game and cheered from the student section. The college community is excited and looking forward to an action-packed football season.

“I’m so excited for this football season,” Allegheny cheerleader Madison Heater, ’20, said. “I have a lot of friends on the team and despite this loss you can tell the team still put in a lot of hard work.”

The football team will take the field on Saturday, Sept. 16 at 3 p.m. against Denison University at home.