2017 seminars in Germany and Poland, Greece, Cuba, Italy and the Great Lakes 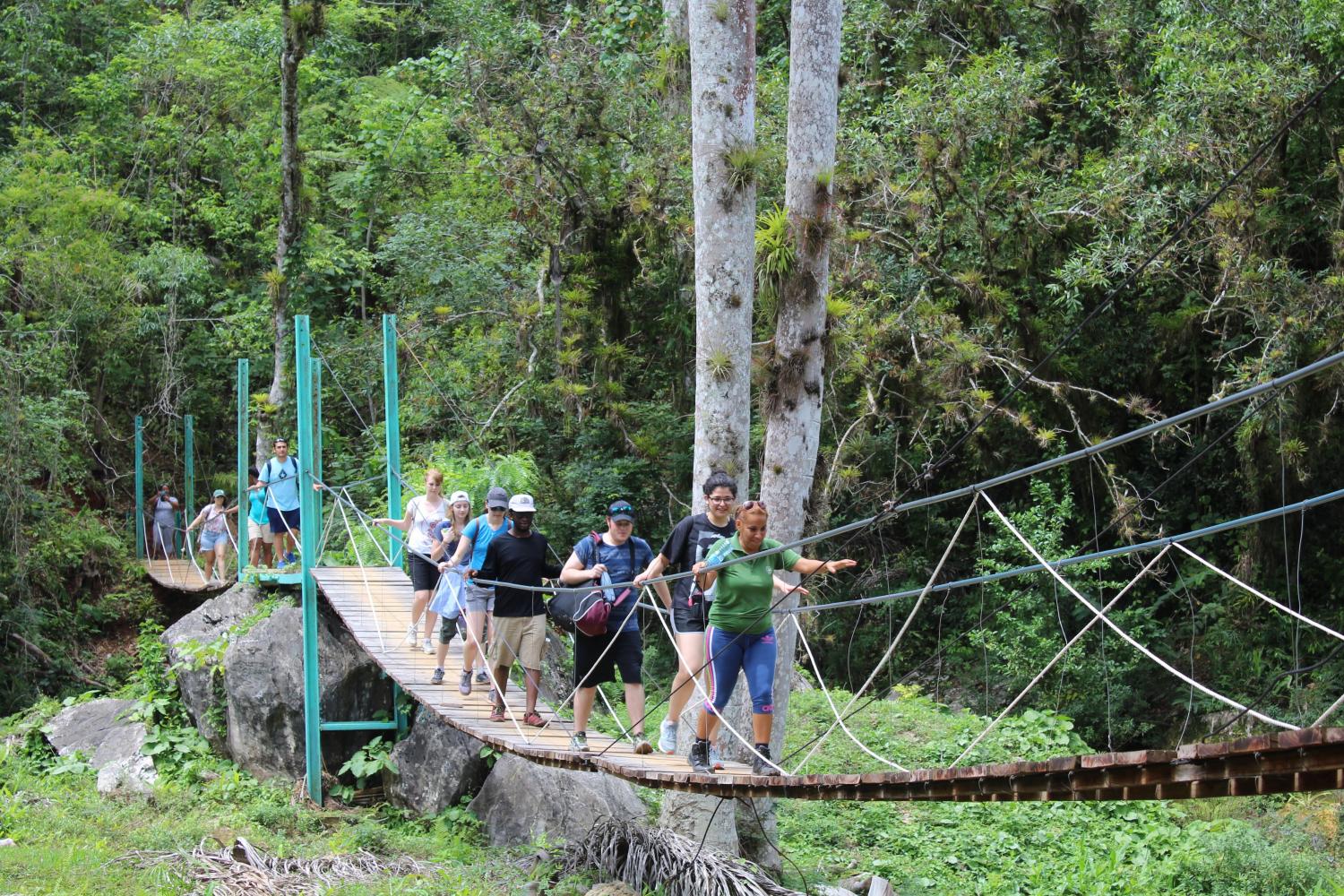 The International Education Office offers annual Experiential Learning Seminars following each spring semester. At the end of the 2017 spring semester, four global seminars and one departmental seminar provided credit-bearing opportunities to students interested in immersing themselves in a subject and place.

Proposed by faculty, each global seminar focuses on a central theme and is guided by one or more faculty members. The History Department seminar involves living and working on a replica of the USS Niagara, a nineteenth century wooden vessel commissioned during the War of 1812 which fought at the Battle of Lake Erie in 1813.

Eric Boynton, professor and chair of the philosophy and religious studies department, led a group of eight students from Washington D.C. to Berlin to explore the history and geography of Holocaust memorializations.

“Part of my research is looking at commemoration and memorialization of essentially evil,” Boynton said. “How do you commemorate an epic failure? That’s what a lot of these memorials were worried about.”

Before their departure from the U.S., Boynton asked students to research contemporary European issues of migration and xenophobia as well as ongoing refugee crises. Boynton said these preparations were designed to help students understand what Europe is like today with respect to the seminar’s twentieth century context.

“All the memorials were very well done but different in their styles, and that’s kind of what we were looking at,” said Danielle Higbee, ‘18.

Some memorials were primarily photographs, and others were walls or formations constructed using headstones from destroyed Jewish cemeteries, Higbee said.

According to Higbee the Jewish Museum in Berlin and the POLIN Museum of the History of Polish Jews in Warsaw approached memorialization quite differently.

“It was really cool to compare the Warsaw one to the Berlin one because the Berlin one was so abstract,” Higbee said. “The Warsaw museum was very hands-on with information covering the walls. It was a very historical, typical museum — how you would imagine a museum.”

Higbee described the Jewish Museum in Berlin as having three paths leading to three separate areas of the museum: a path to exile, a path to death and a path to survival.

“It was more about moving through the museum and feeling something,” Higbee said.

The seminar concluded at the site of the Treblinka extermination camp in Warsaw. Stones now cover the grassy hill and stand where the camp’s buildings used to stand.

“The title is literary landscapes, which I think is more accurate now after having gone on the trip,” said Anastasios Mihalopoulos, ‘19.

The seminar focused on nonfiction writing and learning to write about where you are and what you see, Mihalopoulos said.

Led by Professor and Chair of the English department Christopher Bakken, the group began and concluded the seminar in Athens.

During the three-week seminar, the group travelled to mountainous Delphi, the beaches of Thasos and the blue zone of Ikaria. Each space gave students the opportunity to practice nonfiction writing and travel writing in different environments, Mihalopoulos said.

A chemistry major and writing minor, Mihalopoulos said he appreciated studying Ikaria, one of only a few places in the world described as a “blue zone.”

“They’re areas that are known to have extremely high life expectancies,” he said.

“We studied the diet there — there are a lot of compounds and chemistry that go along with that, but at the same time we looked at the broad scope of things. It was kind of getting me out of that mechanistic lab feel.”

Before the departure from Greece, the group spent some time back in Athens visiting monuments and the National Archaeological Museum. Mihalopoulos said he enjoyed the opportunity to see many parts of Greece and to better understand his own writing.

“It’s a famous Italian expression that really has to do with the honor-bound aspects of Italian culture — looking good is basically what it says,” Miller said. “And no matter how things really are for you, you want people to think that you’re well-off, that you’re doing well, that you’re cool.”

Miller said students used literature and Italian films to get a sense of “La Bella Figura” in time — in the fascist Italy of the Mussolini era and the Italy of today.

“There are good things and bad things about this kind of honor-bound culture because sometimes it lacks a certain degree of introspection and truth-telling,” Miller said. “In many ways there’s a very heroic past and yet there are these interesting questions about Italian culture as well, which don’t always necessarily reflect well on Italians.”

Students were asked to think about these concepts and actively engage in the culture through assignments and research of a particular topic that began before the seminar. Miller said students presented their research to one another in Italy.

“We tried to get students to think about travelling rather than simply being tourists,” Miller said. “That involves, above all, having some understanding of the country and its culture.”

“I’ve been going there since 1996, and I’ve seen the island change quite a bit, especially in terms of tourism,” said Barbara Riess, professor of modern and classical languages.

Riess and Professor of Environmental Science Brittany Davis accompanied 12 students to different sites in Cuba so they could experience and study types of tourism. Riess said they also attended several lectures that covered resource management, agriculture, U.S. Cuban relations and the natural impact of tourism among other topics.

Based on these lectures, the seminar focused on tourism and what the Cuban Revolution means today, Riess said.

“First we had to get a background on these things so we could start exploring the sort of paradox between this socialist revolution and this hugely capitalist activity,” she said.

“[The Christian Center for Reflection and Dialogue] was basically a place for us to branch out and go to other locations that weren’t as frequented by tourists,” Riess said. “It offered an educational tourism or a service learning tourism, so we got to look at that kind of model too.”

“History Under Sail: The Flagship Niagara and the Great Lakes”

Andy Nunn, ‘18 heard about several global seminars but decided to attend the History Department’s seminar aboard the replica of the USS Niagara.

“I didn’t hear about this domestic one and immediately when I read about it, I thought: wow that’s so random but also so cool,” Nunn said.

Nunn and nine other college students from Mercyhurst University, Florida Keys Community College and Niagara University spent three weeks as trainees learning to sail the ship under the direction of the full-time crew, bringing the group to an approximate total of 30 sailors, he said.

Nunn said the ship’s journey consisted of four main stretches: from Erie to Cleveland, Cleveland to Toledo, Toledo to Put-In-Bay and Put-In-Bay back to Erie. The crew also took day trips to visit museums, monuments and Niagara Falls.

Although the replica has modern components, it still offers a nineteenth century experience, Nunn said.

“The only difference is they have motors now, and there’s some electricity on the ship,” he said.

“But other than that I slept in the hammocks, I bumped my head a thousand times down below the deck because it was so short. I ate on the ship, and I learned all the ropes of the ship — literally the ropes.”

While learning about the operational aspects of the ship, trai

nees learned about maritime history and the War of 1812.

“It was all very active learning,” Nunn said. “You learned by doing, you learned by hearing, listening, talking, asking questions. There was definitely some reading involved but the reading was all supplemented with real stuff.”