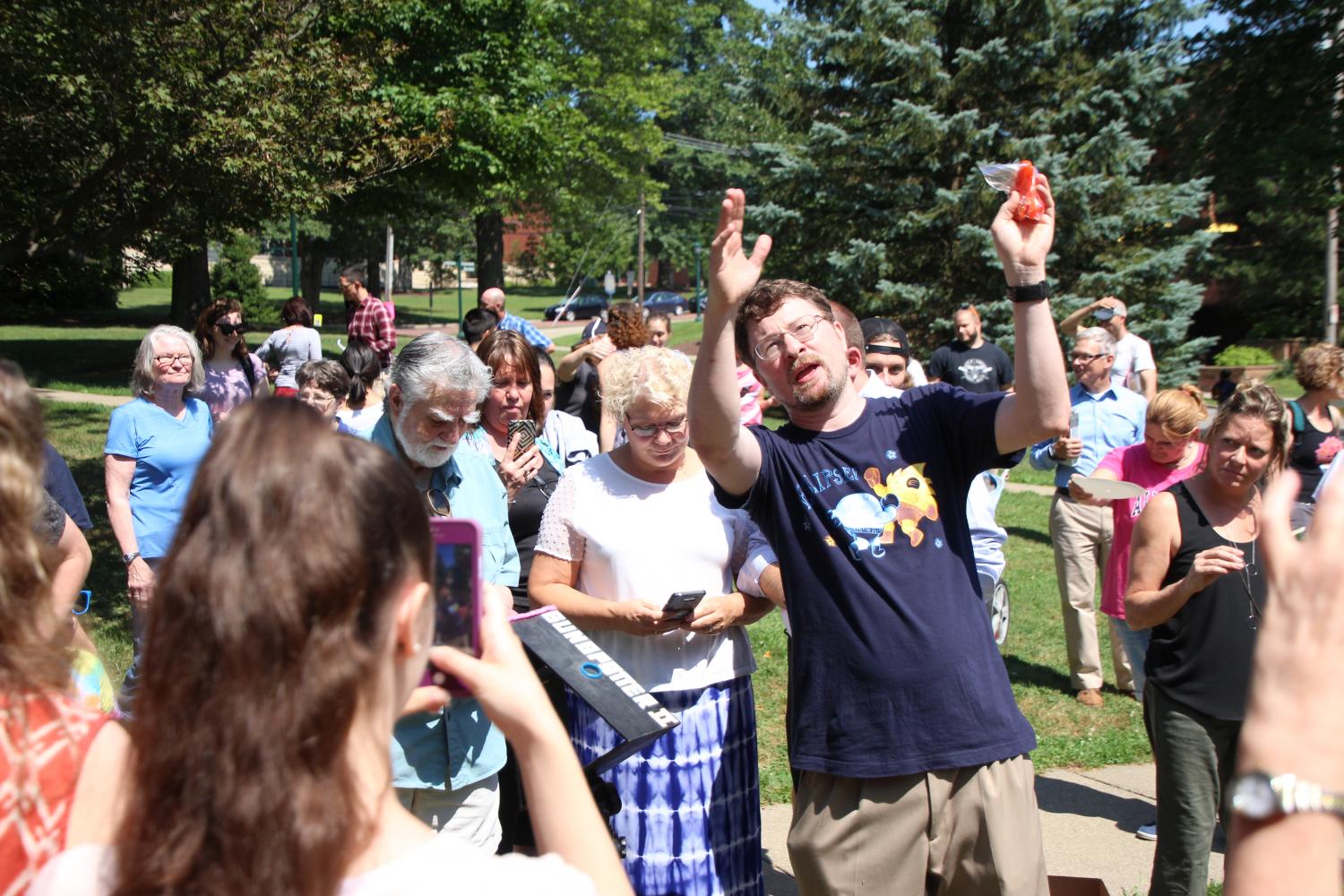 Associate Professor of Physics Jamie Lombardi explains the science of the eclipse to students, faculty and community members outside Newton Observatory on Monday, Aug. 21, 2017.

The moon’s orbit perfectly lined up between the Earth and the sun on February 26, 1979. Thirty-eight years later, August 21, 2017, the moon once more totally eclipsed the sun’s rays from the Atlantic Ocean to the Pacific Ocean.

Like over one million Americans, Tim Kutz, ’18, made the trip south to Nashville, Tennessee, where he witnessed the total eclipse of the sun by the moon.

“We could see Venus and all of the stars,” Kutz said. “It appeared to be the middle of the night. Everything went totally dark.”

Kutz did not make the journey alone. His father made plans with a friend he met in Germany while studying abroad in Cologne during his own tenure as a student at Allegheny.

“[The family] came over from Germany to see [the eclipse], and like Germans, they planned it to a T,” Kutz said. “[My dad’s friend] had four different cameras set up, so we were able to watch it from the start.”

Although Meadville did not experience a total solar eclipse, Erin McNamara, ’20, utilized her own camera on the roof of the Vukovich Center for Communication Arts. She protected her camera from hazardous UV light rays by placing a solar filter over her lens as she took a time lapse of the eclipse from start to finish.

“I can’t get up onto the roof of my dorm,” McNamara said. “The Vuk roof is high up and wide open.”

The Meadville area experienced a maximum eclipse at 212 degrees with a magnitude of 56.5 degrees, which is about an 80 percent eclipse of the sun when at its peak, according to Timeanddate.com.

Others chose to convene at the Newton Observatory during the peak of the eclipse, which occurred at 2:33 p.m. EST.

Lombardi said the event was also a way for new students, including those participating in the Access Allegheny Scholars program, to meet and interact with college faculty and staff for the first time.

Along with telescopes and cameras, Lombardi also made a sun spotter available for public use. A sunspotter contains three mirrors and a lense and is used to observe sunspots as well as sunspot cycles.

“The part that looks like the moon is actually the sun” Lombardi said. “It’s safer than a telescope because its projectionsystem is easier on the eyes.”

While NASA recommended not to look directly at the eclipse due to harmful UV rays, those who possessed solar filters such as the ones utilized by McNamara and Lombardi could capture the moment for ages to come via camera or telescope. Glasses, whose lenses contained the same type of solar filter, circulated throughout the market for purchase, so that Americans everywhere could experience and learn about our solar system.

With these technologies, the average American could take part in both a national event and natural phenomenon.  “The only word I can think of to describe it would be surreal,” Kutz said of his experience.

“I’m kind of bummed I’m not in South Carolina,” McNamara said. “[The eclipse] would be full, but a partial is still cool.”

According to NASA, the next total solar eclipse passes through the contiguous United States on April 8, 2024.

Correction: A previous version of this article incorrectly identified the department in which Visting Professor Chris Finaret teaches in a photo caption. He is a Visting Professor of Economics. Updated Aug. 26, 2017 at 4:12 a.m.