ASG sponsors ‘It’s On Us’ Campaign with Title IX Office 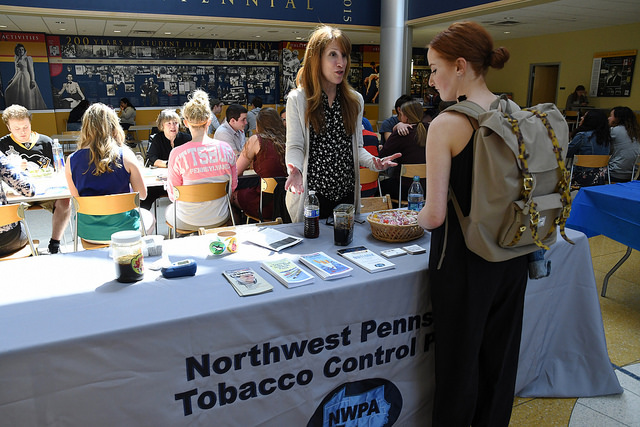 Allegheny Student Government will host the It’s On Us Campaign in the lobby of the campus center on April 25 through 27, as part of Allegheny’s observance of Sexual Assault Awareness month.

The primary goal of the event, according to ASG President Tess Bracken, ’17, is to raise awareness regarding sexual assault and encourage students to sign a pledge committing them to do their part to end sexual violence.

Bracken said the event is also meant to be a way of supporting those who have been affected by sexual assault.

“I’m just hoping that people will realize there is a lot of support for people going through these situations. They are not alone,” Bracken said.

ASG Sen. Amy Currul, ’17, who helped to organize the event, said the pledge is meant to be a call to action for the Allegheny Community, which she believes wants to do something.

“I’d like to see the Allegheny campus really sign up to actually do something in regards to sexual assault,” Currul said.

Bracken said the event is being organized through the collaboration of ASG, the Allegheny Title IX office and Title IX Coordinator Gilly Ford, who reached out to ASG about doing the It’s On Us Campaign. She said it seemed like a good way to end the academic year and to draw attention to the issue at Allegheny.

“[The campaign] is trying to make it visible,” Bracken said.

Ford said for this year for Sexual Assault Awareness Month, she wanted to bring more student groups into the organization. She said the issue of sexual assault is one that should involve everyone on campus and this was what drew her to the It’s On Us Campaign.

“We really liked the message, it’s inspiring pretty much everyone to become involved,” Ford said.

As part of the month’s programming, Ford said the college worked to bring Don McPherson, a former NFL quarterback and social justice advocate to campus to speak on sexual assault. She said McPherson was a great speaker to have on campus because, as a former professional athlete, many might not expect to see him as a sexual assault advocate.

“I don’t know if he’s someone most people would think to look to as a role model, but that’s where his heart is,” Ford said.

Ford said her hope is that the Allegheny Community will realize from the campaign that everyone needs to be involved in order to end sexual violence.

“My personal belief is that in order to start a change in a culture and climate, everyone needs to be involved,” Ford said.

The final event of Sexual Assault Awareness Month will take place on April 27, in the form of a Take Back the Night March, which will begin on the Gator Quad and end in Diamond Park in Meadville. The march will begin at 7:30 p.m.