Allegheny’s Prize for Civility in Public Life was awarded on Monday, April 10, to United States Supreme Court Justice Ruth Bader Ginsburg and Justice Antonin Scalia by Allegheny College President James Mullen and Former Pennsylvania Governor Tom Ridge at the National Press Club in Washington D.C. This was the sixth year that Allegheny has presented this award on a national scale.

“Allegheny’s Civility Prize is awarded to two prominent politicians who have demonstrated civility in their careers,” said Hayden Moyer, ’17, the chief of staff for Allegheny Student Government. “The Civility Prize is one of the nationally prominent things that Allegheny does, and it is becoming even more  important.”

The award is meant to recognize those who have striven to maintain civility in a political environment.

“It is Allegheny’s way of recognizing civil political discourse, since we have been at a peak of polarization,” said Royse Bachtel, ’18, who was invited to attend the award ceremony as a member of the Center for Political Participation but was unable to go. 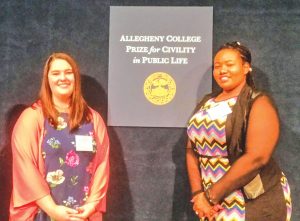 Levi Lundell Sydney Fernandez, ’17, and Yemi Olaiya, ’17, were chosen as the 2017 student recipients of Allegheny’s Prize for Civility in Public Life Award on Monday April 10, 2017 in Washington D.C.

“I was abroad last year when the award was presented, and I remember seeing it on the news that [John] McCain and [Joe] Biden won,” said Sofia Kaufman, ’17, Allegheny Student Government’s vice president.

Bachtel said the award is meant to transcend political parties and ideology.

“The prize makes Allegheny visible to the rest of the country and commits us to furthering ideas — not just liberal or conservative — but promotes discourse on both sides,” Bachtel said.

Administrators, independent of student input, select the winners of the national prize.

“Even though students don’t necessarily decide who wins, I think it shows that we care a lot more than other colleges,” Moyer said.

Mullen and select students made the trip to D.C. to present the prize.

“Students with a direct interest in the subject matter of the prize, such as the CPP fellows, members of ASG and other individuals are invited due to their own civil discourse in difficult subject matter,” Moyer said.

The Civility Prize was created due to Allegheny’s strong statement of community and value given to civil discourse according to Kaufman.

“Due to the way the conversation has been headed in the country, it is important to recognize civility in public life,” Kaufman said.

Bachtel said the 2017 recipients were chosen because of their ability to transcend political difference.

“Justice Ruth Bader Ginsburg and Antonin Scalia won this year because, while they were on opposite sides of the spectrum politically, they were still able to be friends outside of the court,” Bachtel said. “It’s important to recognize others who are respectful and talk to those with opposing views in a cordial way.”

In addition to the national civility prize, Allegheny awarded a Student Prize for Civility in Public Life to Yemi Olaiya, ’17, and Sydney Fernandez, ’17.

“Both winners did really great things and engaged with people during the election,” Bachtel said. “There was a lot of debate and talk surrounding the election and it became very polarized. It was important on a school scale to reward people for respectful discourse.”

Kaufman said this year, given the divisive election, the college wished to recognize students for their ability to remain above the harsh and discordant language that was so often associated with the election.

“This award was created to recognize students on campus who practice civility in their everyday lives,” Kaufman said. “The national civility prize given to McCain and Biden was a really big deal last year and they thought it would be a nice touch to do it for students on campus who foster civility and live within the statement of community.”

Members of the Allegheny community nominated students, and a committee of faculty and staff chose the winner.

“Having the civility prize awarded on a national level shows Allegheny’s sense of community and how we value discourse. It really shows the world how Allegheny is, because not all universities are like that,” Kaufman said. “While we do value differing opinions, we value civility and civil discourse above all else.”