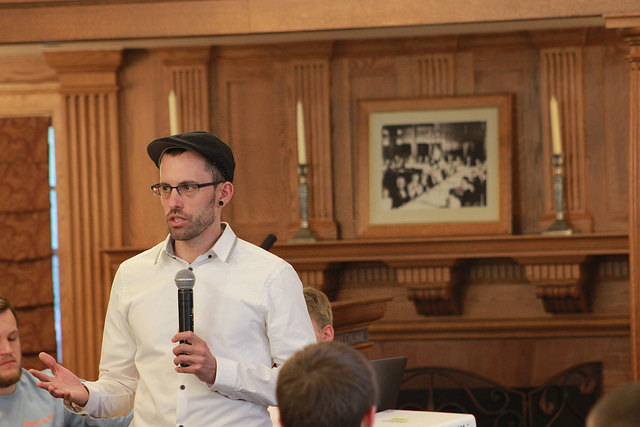 Investigative Journalist Shane Bauer speaks to students, staff and faculty in the Tillotson Room of Tippie Alumi Center on April 8, 2017, as part of a conference titled “The Injustices of the Justice System.”

Shane Bauer, a senior reporter for Mother Jones, visited Allegheny College to give two talks on April 7 and April 8 as part of “The Injustices of the Justice System” conference hosted by the Student Alliance for Prison Reform.

Bauer is known for going undercover for his investigative journalism stories. He has written several articles on doing so, including “My four months as a private prison guard” and “Undercover with a border militia.”

Mauroni knew that Bauer had written several pieces regarding prison reform, according to Torrence.

Bauer agreed to speak at the SAPR’s conference held on April 8, in addition to giving a talk the night before on campus. For the conference, Bauer was joined by two other speakers, Ashley Diamond and Jason Hernandez.

Hernandez was granted clemency by President Barrack Obama, after he was given a life sentence for non-violent drug charges. Diamond is a transgender woman activist who was incarcerated in a male facility for three years.

Earlier in the day, Bauer had an informal conversation with JPI students.

“Darren Miller, who is a professor in the art department, happened to get to know Shane Bauer,” said Ben Slote, professor of English.

Miller emailed Bauer asking him if he would be interested in speaking at Allegheny. Then Slote emailed him twice. Bauer responded the second time saying that he would be able to speak at Allegheny.

Mauroni picked up Bauer from the Pittsburgh airport, according to Slote. Danny Larson, ’19, was supposed to pick up Diamond in a separate vehicle, but Diamond was not able to make her flight. She Skyped into the conference instead for her talk.

The conference began at 11 a.m. on Saturday, April 8. It was hosted by several campus organizations who held panels throughout the day. Some of these organizations included the SAPR, Union Latinx, the Association for the Advancement of Black Culture and the Gender and Sexuality Alliance.

“And, again, because we were scrambling for a keynote speaker, trying to make up the funds, and we were very, very lucky that [Bauer] was already set up for JPI,” Torrence said. “We were able to contribute something and asked if he would like to speak. We’re very, very lucky and just excited to have him.”

Slote introduced Bauer before his talk on April 7. He informed the audience that Bauer’s visit was sponsored by the CPP, SAPR and JPI. Bauer is a senior reporter for Mother Jones magazine but has written for several other publications. Militia and border control were the focuses of Bauer’s talk for that night.

Bauer said he never lied and even used his real name when undercover, but no one ever investigated him. He was working undercover again on the militia piece when the prison story was released.

“When that prison story came out, I was watching the Facebook page, and there was nothing. I mean, it didn’t seem that anyone made a connection,” Bauer said.

Bauer said no one knew who he really was during his undercover reporting as a private prison guard and as a border patrol militiaman. When he asked to interview the people who he had worked with, he had to inform them he was a journalist.

“Everyone who I mentioned in the story, I contacted,” Bauer said.

Mauroni introduced Bauer on April 8. Mauroni also serves as the editor-in-chief of The Campus.

Bauer said in the case of the story on private prisons, he was surprised by the reactions to it he got, especially from inmates.

“This guy, Corner Store, told me people said they were excited about [the story],” Bauer said. “He was like, ‘yeah we all knew. You were writing in your notebook all the time.’”

Bauer also talked about  a story he wrote about the two years he spent in jail in Iran. He said he was placed in solitary confinement and isolation for four months during his time there.

“I think it’s a really exciting opportunity for the Allegheny community to hear from somebody who’s doing this extremely important work,” Slote said. “We still need journalists to expose these realms which, on the one hand, are really consequential to the lives of the people they affect directly and maybe to other people, but are secretive or closed.”

Slote said he hoped the event would make people more aware of the JPI program at Allegheny and the benefits of the press in a democratic society.