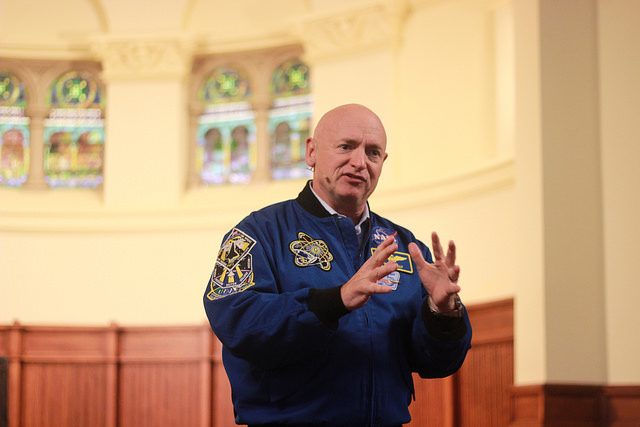 Astronaut Mark Kelly speaks in Ford Chapel on Wednesday, April, 5, 2017. Kelly was on campus as the recipient of the 2017 Gator of the Year Award from Allegheny Student Government.

Allegheny Student Government named Captain Mark Kelly as Gator of the Year for 2017. Kelly delivered a speech entitled “Endeavor to Succeed” in Ford Chapel on Wednesday, April 5, at 7 p.m.

“I have visited the planet Earth five times,” Kelly said.

Kelly is a former U.S. Navy Pilot and NASA astronaut. He was a combat pilot for the Navy during the Gulf War and flew four separate missions to the International Space Station during his time at NASA.

Kelly described launching in a shuttle as being like “the hand of God came down and grabbed you, and ripped you off the planet, [and] I’m not just saying that because we’re in a church.”

He said that leaving Earth and seeing it from the outside makes you aware of the fragility of the planet.

“We all literally live on an island in our solar system,” Kelly said. “It really gives you perspective [on] trying to take care of the planet.”

For his final mission for NASA, Kelly was the head pilot for Space Shuttle Endeavour’s final mission to the International Space Station. He almost pulled out of the mission because it launched only months after an assassination attempt on his wife that left her with a severe brain injury.

Kelly’s wife, Gabrielle Giffords, a former United States representative was shot in the head from a distance of three feet during an assassination attempt on Jan. 8, 2011. She survived the attack but now suffers from severe aphasia. Twelve people were injured and six died in the attack.

During his talk, Kelly discussed the lessons he has learned throughout his career and from his wife during their marriage.

Kelly said that unlike himself — as he openly admitted to not being a particularly good student — Giffords was a classic overachiever. When they met, she was a state senator, the CEO of a family business, a Fulbright Scholar and rode a motorcycle.

“She seemed like ten women at once to me,” Kelly said.

Kelly was born in New Jersey and is the son of an Irish detective father and a mother who worked as a secretary and waitress.

“I came from an ordinary background,” Kelly said.

Kelly marked his mother’s decision to change careers and become a police officer as a key learning experience for him. He said he watched her train to pass the physical fitness tests and that, for the first time in his life, he saw the power of having a goal and a plan, and what you can achieve when you refuse to give up. It was this lesson that motivated him to work harder in school, and he carried this determination and persistence with him throughout his career in the U.S. Navy and later at NASA.

In his first years at flight school, Kelly said he was not a naturally gifted pilot. After one particular training exercise, his instructor pilot sat him down and asked him if he was sure this career was for him.

However, Kelly emphasized that just because you do not have the natural aptitude for something does not mean you cannot be successful at it.

“How good you are at the beginning of anything you try is not a good indicator of how good you can become,” Kelly said.

Among the anecdotes and lessons Kelly shared was the story of his first combat mission during the Gulf War. His plane came under heavy fire on the way to their target in Southern Iraq, and he said he had to execute two extreme maneuvers in order to avoid being hit by missiles. He quoted Winston Churchill, who said, “Nothing in life is so exhilarating as to be shot at without result.”

On their way back from the target, Kelly chose to fly through Iranian airspace rather than returning the way they came and flying back through the fire. This decision almost cost him his life as the U.S. Navy identified his plane as an enemy’s and almost shot him down. Kelly said this experience taught him the importance of communication.

“There is never a good excuse for not communicating with the people you are working with,” Kelly said.

His talk highlighted the importance of learning from one’s mistakes. Kelly spoke about the Challenger and Columbia disasters, and how NASA handled these events and eventually worked to learn from their experience. He said one of the key takeaways for NASA was that “none of us is as dumb as all of us,”  and that this is now printed on a wall in the Houston office. Kelly said this is not to say that the organization does not value collaborative decision-making, but recognizes that there are times when group thinking can be detrimental.

Kelly applied this lesson to his personal life following the assassination attempt on his wife. He said that when Gifford’s doctors were deliberating about what approach they should take for her second brain surgery, he gathered all the doctors and interns into a room and asked the most junior members for their opinion first so that they did not feel compelled to simply agree with the more senior doctors.

He said it is important when working in a group of people to hear everybody’s perspective. When forming his own teams of people at NASA, he said he tells everyone they are required to question his decisions. He does not want a team of “yes people.”

He ended his talk with a quote from his wife, who was unable to attend the event.

“Be bold, be courageous and be your best,” Kelly said.

“I thought it was inspiring,” Dugan said.

James Lombardi, associate professor of physics, said he appreciated Kelly’s focus on the importance of relationships, and the big picture perspective that he addressed.

Lombardi also attended the Q&A session that was held earlier in the day and said that people of all ages asked some great questions.

“[We all have an] innate curiosity about space,” Lombardi said.