Jordan Peele revamps the horror genre in ‘Get Out’ 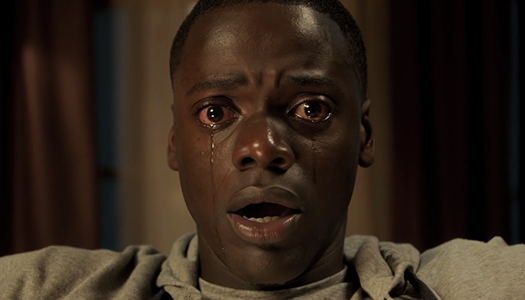 Get out of the house and get into a theater to see Jordan Peele debut his directing career in the horror film, “Get Out,” a movie that is sure to leave audiences wanting more. “Get Out” is not your typical scary movie. It is unpredictable and spine-chilling as it focuses on a black man living in a white world.

Although “Get Out” has fallen from a 100 percent rating on Rotten Tomatoes to a 99 percent, it is a rare occurrence for a horror film to receive such a high score. I am glad I did not judge “Get Out” by its movie trailer, because the trailer makes the film seem as if it is a parody making fun of racism in America.

Peele skillfully uses the horror genre to have an effective impact on his audience. He calls attention to people’s perceptions of race in the United States today. The white characters in “Get Out” are shown as wealthy individuals who think being black is a trend that they can show off, buy and manipulate to their liking.

Peele wastes no time, kickstarting the plot in the opening scene. One of the most phenomenal performances is delivered by Lakeith Stanfield who plays Andrew Logan King. Andrew, an African American, is shown wandering around a predominantly white neighborhood looking for his girlfriend’s house only to be met and followed by a mysterious white car. Within the first five minutes, Andrew is lost, followed and then hit over the head and stuffed into the back of the car by its mysterious and masked driver.

The film does not rely solely on sudden jumps, suspenseful music and shadowy figures. Instead, the characters drive the plot as they dominate in their roles. Daniel Kaluuya plays Chris, an African American who meets the parents of his seemingly-naïve white girlfriend Rose, played by Allison Williams.

Chris is a photographer with an artistic eye who loves to ask questions. Rose is the passive and annoyingly ignorant girlfriend who reassures Chris that her parents will not be bothered by the color of his skin.

“Do they know I’m black?” Chris asks as he is packing for their weekend trip.

Rose responds by telling Chris that her father would have voted for Obama for a third time if he could have, something her father uses later as proof that he is not racist.

The inevitable gory events to come are foreshadowed when Rose violently hits a deer on their way to her family’s house.

After a confrontation between Rose, Chris and a police officer, the couple is welcomed by Rose’s parents, Dean and Missy Armitage, who make awkward jokes about Obama and retell embarrassing stories from Rose’s childhood after her brother joins the family for dinner. The evening ends with a near brawl between Chris and Rose’s drunk brother.

The eerie welcoming and obviously superficial atmosphere take a quick turn when Chris goes outside to smoke in the middle of the night. He is almost run over by the groundskeeper who is sprinting around the lawn and watches the housekeeper ogling at her reflection. When Chris goes back inside, he is met by Missy, who then hypnotizes him to stop smoking as well as relive some dark memories. Chris wakes up the next morning with a fuzzy recollection of what happened the previous night.

As Chris begins to interact with the grounds and housekeepers, it becomes evident that something suspicious is going on with their characters. Chris tells the housekeeper that he gets nervous when a lot of white people are around him, and tears begin to flow down her face. However, she still smiles through her obvious pain and tells him in a robotic manner that she loves to work for the Armitage family, adding more confusion and suspicion to the plot.

During a party at the Armitage house, the wealthy white guests observe Chris, asking what his favorite sport is, feeling his muscles and making sexual innuendoes. The guests talk about how black is in fashion as if it is nothing more than a fad they can try and then throw away as the season changes.

The less you know going into the movie, the better, so I will not give too much away. “Get Out” is unpredictable, creative and innovative. One moment you are covering your face out of fear and the next moment, you are wiping tears from your eyes from laughing so hard.

The characters are cast perfectly and carry the plot. You will love to hate the Armitage family, and you will sympathize with Chris as he fights to survive his nightmare.

“Get Out” is a refreshing new take on horror movies. Peele’s first attempt at directing is a success. He proves that it is possible to get at real world issues without having to frame a work as a documentary or a drama. Peele engages his audience and makes them think about their own views, ideals and actions after the film ends.