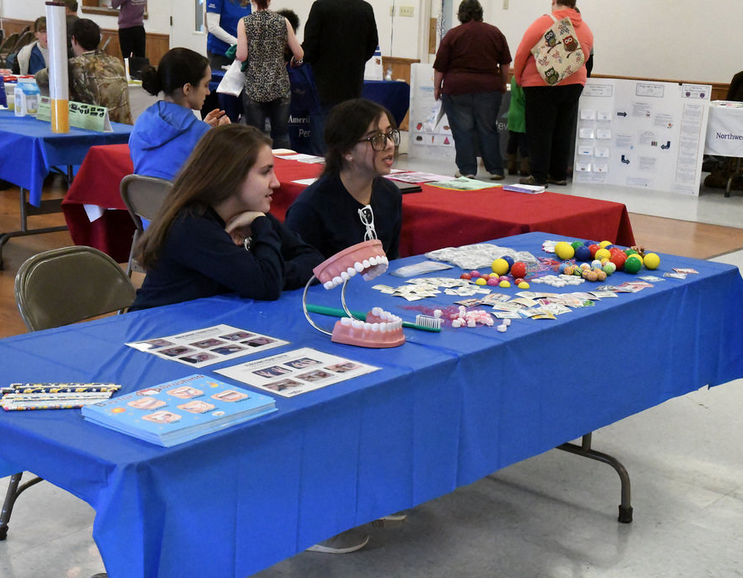 The Allegheny College Pre-Dental Society hosted their third annual Children’s Dental Health Fair on Saturday, Feb. 18. The fair aimed to educate the community’s youth on the importance of oral hygiene according to Onalee Sortino, ’18.

“Our goal is to promote oral health and oral hygiene, and start kids as early as possible while also providing a fun experience,” said Sortino, secretary of the Pre-Dental Society.

Sortino served as one of the three coordinators of the fair.

“The goal of it is to educate kids on the importance of oral health, and how it leads to overall health,” said Sarah Cole, ’18, who also helped to coordinate the fair.

The fair consisted of nine separate tables where children could go to be educated about different aspects of oral health and receive free giveaways such as toothbrushes and bracelets.

“Every kid gets a dental goodie bag,” Sortino said.

Each bag consisted of a toothbrush, toothpaste, floss, mouthwash and a coloring book, according to Sortino.

The tables were set up and staffed by a variety of organizations from the community.

“The Meadville Medical Center, from the beginning, has always helped us out,” Cole said.

The activities are meant to entertain and teach children.

“It’s good that the kids get exposed to oral hygiene, and it gets exposed to them in a fun way,” said Toni Longo, who works with Valley Dental Center.

Planning for this year’s fair began in October 2016, but the fair was originally founded and developed in 2015 by Matt Zaborowski, ’17, president of the Pre-Dental Society.

“Back in 2015, I was approached by a group of students who found there was a need in the community for early education in oral health,” Zaborowski said.

The goal of the event is to educate chilren and families on the importance of oral health, according to Zabrowski.

“It was prompted by a study — which was a needs-based assessment — that showed there was a need for it here,” Cole said.

Thirty-five children came the first year, followed by 75 at the second year’s event. This year, the fair attracted 65 kids, according to Zaborowski.

In order to publicize the event, Zaborowski sent a flyer home to every elementary school child in Meadville — about 5,000 in total.

The Pre-Dental Society raised $2,500 from the community to cover the cost of the event, but not all of the help they got was monetary, according to Zaborowski.

“Not only do we have sponsors that give us money, but local shops and businesses give us gift cards and other gifts to raffle off at the fair,” Sortino said.

“My favorite part about the fair is when all the kids come out, have a great time and leave with big smiles on their faces,” Zaborowski said.