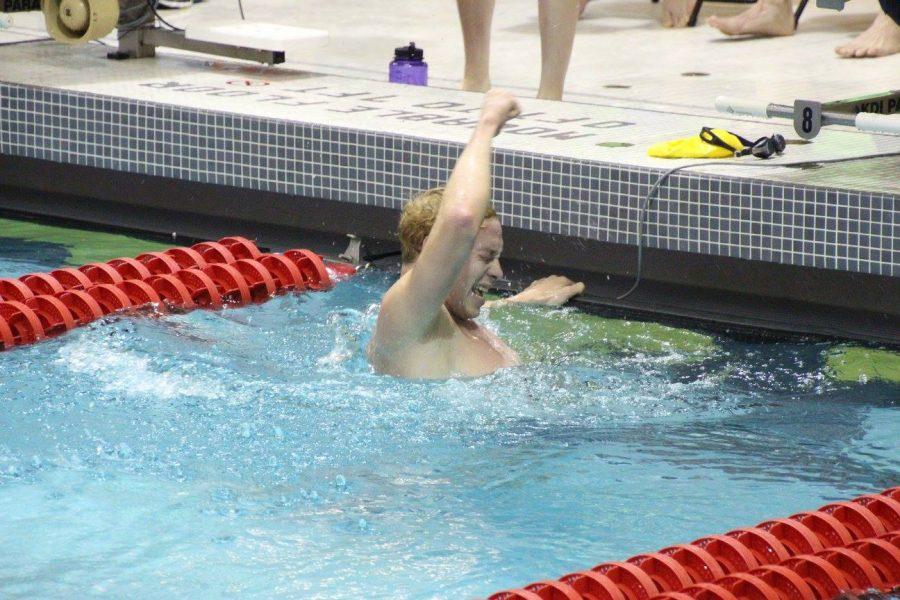 Matt Nardozzi, ’19, celebrates finishing the mile and breaking the Allegheny record with a time of 16:03.82. Nardozzi also broke records in the 400 IM and the 1,000 free.

The men’s and women’s swimming and diving teams competed in NCAC Championships on Feb. 8 through 11, finishing sixth overall in the conference.

“We were all really excited about going, and I think that showed as the meet went on. … Everyone who was on the relays was really excited to swim and they did what they needed to do. We got up and we swam fast and it was a lot of fun,” said Matt Nardozzi, ’19.

Nardozzi was also on the men’s 200 medley team that finished with a time of 1:34.96, which is .03 off the record. The men will be going to the Kenyon “Fast Chance Meet” to swim the event again to try to break the record.

“It was really exciting. After I broke the mile record – that was one of my main goals for the season ­­­— so finishing the race and knowing that I broke the record was really exciting,” Nardozzi said. “Later on, I found out that in that race I also broke the 1,000 record, which was icing on the cake. That was another record that I have been going for, but the fact that I got both in one was super exciting.”

Nardozzi broke the 400 IM record in a regular season meet early this season, then beat his personal best and the record again at conferences.

“We were good about cheering each other on and being encouraging, and there were time drops left and right, and we were breaking records,” said Maddie Janvrin, ’20.

Janvrin broke a personal record in the women’s 100 backstroke, finishing eighth in B finals with a time of 58.9.

“In prelims, I went a one minute flat in my 100 back, and I really wanted to break the minute mark, and the fact that I broke it by an entire second was really memorable,” Janvrin said.

Seniors Danny Litwin and Carolyn Brown said the team did a good job coming together and supporting each other through the meet.

“It’s a four-day meet so there’s so many challenges. It’s such a rough time because it’s such a long period. It’s strenuous as a whole and takes a toll on your body,” Litwin said.

Each day, the team would be at the pool for prelims starting at 8 a.m., then have a break in the afternoon before returning for finals at 4:30 p.m. There are five events each day, beginning or ending with a relay each day. The top 27 swimmers for each event compete in finals for the event in three heats based on final time.

“It’s hard because if you have one bad race in the beginning, you may think you’re going to have a bad meet overall, but it might just be that race,” Brown said. “Staying positive and encouraging through the whole meet is tough. It’s also a lot of [swimming] within those four days.”

Brown said her favorite part of conferences this year was the NCAC senior recognition on the last day.

“All the teams line up in a tunnel, and you walk through all the teams with their hands up. It was fun because I got to lead it since we’re Allegheny and we go first, and I’m the first girl alphabetically, so it was really cool leading it off and hearing my name first,” Brown said.

Following conferences, both Brown and Litwin have wrapped up their last season of swimming for Allegheny.

“That was probably my last time swimming in a competitive atmosphere like that ever, so really enjoying it and swimming fast and getting a lot of my goals that I’ve been working on for a while,” Brown said. “The practices may have stunk but it was the last time doing it so I would power through. I’m going to miss just swimming.”

For other members of the team, the season ending means a time to rest and prepare for next season.

“I’m hoping to stay in shape and keep training hard so that next season I can break that record because I’m so close right now,” Janvrin said.

“Last year I didn’t stay in the water as much and I think it took a toll on my body over the summer so staying in the water more in the offseason is going to be something I look to do more this year,” Nardozzi said.