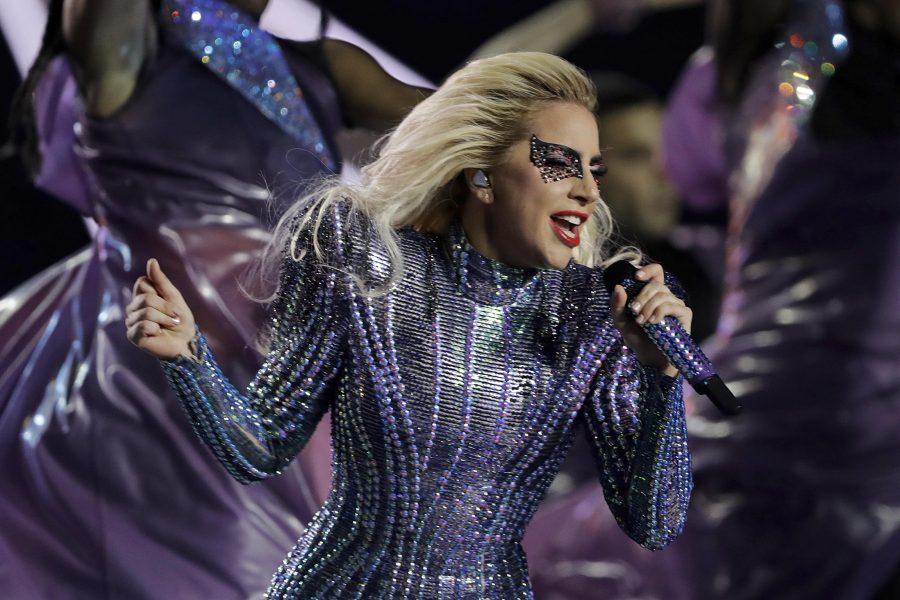 Football lovers everywhere tuned in to watch the Super Bowl Championship game between the Atlanta Falcons and the New England Patriots. However, if you are like me, you tuned in for the real entertainment that came from Lady Gaga during the halftime show on Sunday, Feb. 5.

Lady Gaga has been producing music for almost a decade. She has made bold outfit choices, written unique music and inspired people of all ages to be unapologetically themselves. She showcased all of this when she hit the field during the famous Super Bowl halftime show.

She wore a sparkly silver one-piece short suit and kneehigh sparkly silver boots. Her makeup was bold, with jewels surrounding her eyes and her lips dawning red lipstick. Her bleach blonde hair was pulled back into a low bun. For Gaga, this was a tame look. I am sure many of us were expecting her to wear another meat suit.

She began her performance standing on the top of the stadium singing two songs that America is known for—“God Bless America” and “This Land is Your Land.” Lights shone behind her in time with the music and ended in the shape and colors of the American flag. “One nation, under God, indivisible, with liberty and justice for all,” she said. This was the start of the political statement that I had been waiting for.

After she sang the two songs dedicated to the United States, Gaga jumped down from the top of the stadium, harnessed of course, onto a platform on her stage surrounded by a field full of her fans. Gaga’s unique music is what made her famous, and she started her set with one of her classics: “Poker Face.” She jumped down again to land on the stage.

“Born This Way,” began, and she was joined by dancers. Gaga has a specific style of dancing, including strange poses and jerky movements, all of which contribute to the experience that is Gaga.

When you add “Born This Way” to “God Bless America” and “This Land is Your Land,” there becomes a connection between the songs that relates to modern day America. We live in a country where we are told to be ourselves because that is what we are supposed to do, but if it does not meet a certain standard—a privileged and heterosexual standard—then it is judged. Be yourself, but do not overdo it. Gaga criticized this standardbut without using words other than the lyrics from her song and the lyrics from the songs written for America — a bold but subtle statement.

The next song she performed was “Telephone,” which features Beyoncé. A few years ago, Beyoncé had her own Super Bowl halftime show and then made an appearance a year ago with Coldplay and Bruno Mars. Was anyone else disappointed when she did not appear during her verse in “Telephone”? I understand she just announced her pregnancy, but it is Beyoncé—she can do anything.

Gaga’s first big hit, “Just Dance,” was the next song she performed. This time, she was holding a keyboard guitar. Gaga made her way across the stage and then into the crowd so that she could get herself up onto a smaller stage where a piano sat waiting for her.

The tempo of Gaga’s performance slowed down as she began to play the piano and sing “Million Reasons,” a song from her newest album. Before she began to sing, she spoke to the crowd and said “America, world, how you doing tonight? We’re here to make you feel good. Want to  feel good with us?” It was an effective transition into her newest music.

As she finished up the song, Gaga walked into the crowd once more while singing a line from the song. “Baby, I just need one good one, tell me that you’ll be the good one. Why don’t you stay?” She sang. While doing this, she hugged one of the fans standing in the audience. You could see the fan shaking with excitement.

The music to her last song of the evening began and the cameras were directed back to the stage where we saw her dancers pump the crowd back up. As this happened, Gaga changed her outfit to a two-piece suit with a white top and sparkly silver bottom. Her dancers had also changed their costumes into all-white outfits with some silver accents, some wore different types of football gear.

She ended the night singing “Bad Romance,” one of her most popular songs of all time. Her performance made me want to dance along while posing “Vogue.”

She was lifted from the ground onto a platform above her dancers, but she followed their choreography. After a little dancing, a few of her male dancers picked her up off of the platform and carried her across the stage to a new platform. The camera showed the fireworks above the stadium before shifting back to Gaga as she reached the end of her song and looked out into the crowd. She yelled, “Super Bowl 51,” before throwing the microphone off the platform. She exited the show by making another jump off the stage simultaneously catching a bedazzled football.

I did not expect anything less from Gaga. From her outfits, and her music choices to her choreography, it felt like being at a condensed version of a concert. Although she wasn’t pointing any fingers, her message to America was subtle, and that’s all it needed to be.