Fulbright Scholar reflects on cultural differences between Egypt and U.S. 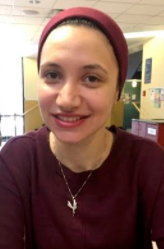 Mariam Nashaat perches herself on a chair in McKinley’s Dining Hall, a smile encroaching her face as she recounts the story of how she arrived at Allegheny College. Nashaat is a teaching assistant from Egypt whose desire for change and new experiences drove her to apply for the Fulbright Scholarship. Ultimately, Nashaat was awarded the scholarship and learned that she would be placed at Allegheny College, charged with the task of imparting her knowledge of the Arabic language, culture and religion to students here.

The excitement of arriving at Allegheny College was delayed as Nashaat had to first adjust to the academic and social life of the students. Nashaat said the course load of students initially overwhelmed her.

“I get surprised at how much the students work here. The students really work hard —like five classes three times a week—we don’t do that [in Egypt]. We maybe have seven classes per week maximum, it’s so difficult here,” Nashaat said.

Once she began to adapt to the amount of courses, she loved the knowledge she learned from them. Aside from being a teaching assistant, Nashaat said she enjoys taking English courses, such as African-American literature and nonfiction writing. She relishes in observing the differences in how people in the United States read and interpret novels from how they interpret them in Egypt.

“Hamlet here is not like Hamlet in Egypt,” Nashaat said.

Aside from academics, Nashaat said she likes to surround herself with friends in one of the international houses or viewing a movie at the cinema. Nashaat looks wide-eyed as she explained the shock of watching students go out on the weekends, because she is not accustomed to doing so. This shock wore off, and while she said she would rather watch a Disney film than go to a party, she is grateful to the friends she has gained here. She said she credits these friends for expanding her knowledge of other countries and traditions.

“I get a lot of experiences here—I know French people, German people, Spanish people, Japanese, Chinese, so like all the international students here, and I know a lot of stuff about other countries that I didn’t know before,” Nashaat said.

Nashaat’s admiration is not a one way street. Tolossa Hassan, ’18, is a friend and student of Nashaat’s, and he believes that she is an asset to the community.

“I think that Mariam gives another insight into what a Muslim’s life is, because yeah, as a Muslim guy, that is one thing, but as a Muslim woman who wears a hijab, it’s an even different perspective that our community doesn’t really get exposed to,” Hassan said. “You know,  I can name the number of people who wear a hijab on campus. And then actually talking to her is another thing. She has been through a lot.”

This past fall, Nashaat visited a class taught by Younus Mirza, assistant professor of Islam at Allegheny. In his class, they were discussing the revolution that occurred in Egypt in 2011.

“She [Nashaat] talked about how she was a college student at the time and participated in the protest and how she lost some friends who passed away and died, so it was valuable for some of our students to hear from someone who experienced the change that happened in the Middle East and the Arab Spring,” Mirza said.

Mirza stressed the importance of Nashaat’s presence given the ban on Muslims from seven countries that came from President Donald Trump’s executive order.

“It’s good to have people from the Middle East here on campus that people can talk to and explain their experiences. People can get a first hand account,” Mirza said.

She said that her most treasured moments at Allegheny are watching the growth of her beginner students.

“When I see the beginner students, who don’t know any Arabic, then at the end of the semester they are able to create their own sentences and express themselves—it’s so amazing,” Nashaat said.

Nashaat also said she was excited to witness some of her students think about the culture of the Middle East differently. She described how one her students was insistent at first that the “American way” was the right way when it came to cultural topics like school and marriage, but after having discussions with Nashaat, he slowly began to recognize that there are other cultures and traditions outside of the U.S. and that there is no “right” or “wrong” way of doing things. Nashaat said she is saddened by the amount  of ignorance surrounding Arab culture.

Nashaat’s said she is not sure what she will be doing in the future. At home, she obtained her degree in English language and English literature and taught young children English. However, after coming to Allegheny, she decided she wants to complete her postgraduate studies to earn a master’s degree, but she is uncertain as to whether she will reside in the U.S. or seek her degree in another country. Nashaat also has a family and a fiancé waiting back at home who are eager for her return, but Nashaat believes that she still has more studying and exploring left to do.

“They want me to get back and get married. That’s how life goes back in Egypt. They think that it’s enough [for me] to travel, work and study, so now you can make a family. But I’m not sure if I am going to follow that rule or not,” she said.