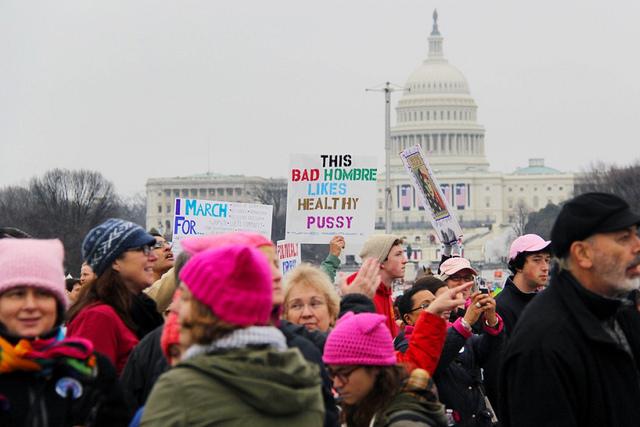 Protesters hold signs as they march on the National Mall in Washington, D.C., on Friday, Jan. 21, 2017, as part of the Women’s March on Washington.

WASHINGTON—Allegheny College students, faculty and staff joined thousands of people from across the United States for the Women’s March on Washington on Friday, Jan. 21, in the District of Columbia.

The women’s march, which was both a rally and march, was billed as a protest against comments made by President Donald Trump during his presidential campaign. Along with other marchers, some Allegheny students brought homemade signs or wore pink hats created by Allegheny’s Playshop Theater costume shop staff.

Rachael Robertson, ’17, said the hats were a symbol adopted nationwide. She credited Miriam Patterson, the Playshop Theater costume shop manager, with the idea of making them for the Allegheny marchers.

“It was really her brainchild,” Robertson said.

Natalie DeSantis, ’18, carried a cardboard sign bearing the slogan “Mother Earth Deserves Better.” She attended the march after feeling that she disagreed with many things that were happening in the government.

“This is the first big upset young people have had,” DeSantis said.

The marchers first gathered in Reis Hall, where Dean of Students Kimberly Ferguson gave a short speech about safety. Although she did not attend the event, she facilitated the arrival process, signing marchers in and forming them into groups under the watch of a faculty member, who was available to help them if they encountered any problems.

In her remarks, Ferguson recommended that marchers remain on the periphery of any large crowds.

“If you are on the periphery, you are much less likely to get caught up in the midst of things,” Ferguson said.

Cameron Neiblum, ’20, said she has attended protests before, primarily in New York City. She, like many other marchers, felt attacked by much of Trump’s rhetoric.

“I felt personally offended by things that Trump said, both for myself and my close friends,” Neiblum said. “I don’t want any of my rights, or any of their rights, taken.”

The students took buses to a train station in Maryland. From there, they joined other protesters as they rode into the District’s downtown.

At the march, crowds of people milled around on the streets, many carrying signs. Some of the signs referenced statements that Trump had made during his campaign, especially remarks insulting women. People such as feminist icon Gloria Steinem spoke at the event. Additionally, some groups offered street performances.

“So many people were united in one common thought, one common desire for what they want to see in America,” Neiblum said.

The Allegheny community came together on Thursday, Jan. 26, to march in support of fellow students and to promote the importance of all voices and opinions being heard in today’s political and social climate, according to the events facilitator Caitlin Deubell, ’18.

Approximately 60 protesters participated in the march which began in front of Henderson Campus Center at 4:30 p.m., and protesters marched to Brooks Circle. Many protesters carried signs, one sported the slogan “love not hate makes America great.” Another sign featured a drawing of a uterus with a Republican Party Elephant inside it. The sign read “the elephant in the womb.”

Once in front of Brooks, those gathered formed a circle and were invited to share their thoughts.

Quintin Peacock, ’17, was among those who spoke in Brooks Circle. He told the assembled crowd he was shocked by the actions of President Donald Trump in his first few days in office. He said he was especially disheartened by the freeze on federal job hires, an action which he said directly affects the National Parks Service where he worked over the summer and had hoped to get a job following graduation.

“I really didn’t believe that in the first five days of this presidency such harsh action would be taken,” Peacock said.

Despite his surprise, Peacock said he was encouraged by the number of people who came out for the march.

“I’m really glad we can all come together,” Peacock said.

Elizabeth Sever, ’17, also stepped into the circle to speak. Sever praised those who had braved the cold and snow to attend the march and said keeping protests peaceful was the most important thing, not just at Allegheny but around the world.

“It’s very important that we don’t get violent. … that is what they want,” Sever said.

Others who spoke in the circle also thanked those who had come to show their support and encouraged those assembled to spread acceptance and compassion while also peacefully resisting actions they saw as unjust.

Luka Crozier, ’19, also spoke during the march. Crozier said while it is important to strive for more, it is also important to recognize that there are those who are working to implement change.

“Even when you look back and see nothing, there are people there, making a difference,” Crozier said.

The march on campus was inspired by the hundreds of marches and protests that took place around the world on Jan. 21, the most notable being the Women’s March on Washington held in Washington D.C. to specifically respond to the hate-filled rhetoric against women that President Donald Trump spread while campaigning.

Deubell said she wanted to hold a march on campus because many students and faculty were unable to attend other marches due to busy schedules the first week of the spring semester.

“The women’s march happened on Jan. 21, 2017, and was a day where millions of people from around the world came together to raise their voices about the issues that threatened immigrants, Muslims, LGBTQIA, sexual assault survivors, women, POC, people with disabilities and more. They came together to show that our differences do not separate them if we don’t let them,” Deubell said. “On our campus, I just want people to feel like they matter and to share their opinions and perspectives. The best way to understand someone’s point of view is to hear them speak, and so I wanted to provide a space for this to happen so everyone—myself included—can hear people of different backgrounds speak their minds on issues they find important.”

Deubell said while the other marches were in response to political issues, the march on campus is not meant to be political but rather an open platform for people to share their point of view and feelings about the current state of the U.S.

Deubell said there was no set agenda for the event because she wanted to keep it open to anyone who wanted to share their thoughts.

“Some might say it’s unorganized, but my intention is to not be in charge of it. I want it to flow naturally and have people who feel inclined to step into the circle and speak their mind on their own time,” Deubell said.