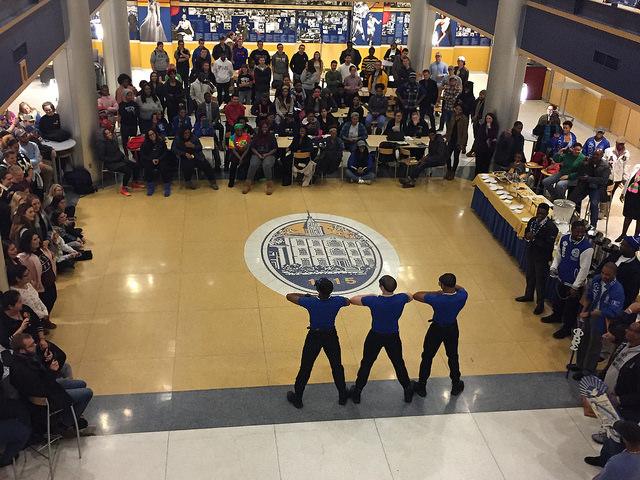 Three members of Phi Beta Sigma, Inc., a historically black fraternity, are inducted into the fraternity in the campus center lobby on Sunday, Dec. 4, 2016, bringing the fraternity back to Allegheny for the first time since the 1990s.

Allen Baugh, ’18, Matthew Wild, ’18, and Andre Bryan, ’18, were inducted into the new Nu Mu chapter of Phi Beta Sigma Fraternity, Inc., a historically black fraternity. The event was scheduled to begin at 5:14 p.m. on Sunday, Dec. 4, in the campus center lobby.

The organization was originally founded by three African-American students—A. Langston Taylor, Leonard F. Morse and Charles I. Brown—at Howard University in the District of Columbia during the winter of 1914.

They created the organization in an effort to bring together young men who fostered the ideals of brotherhood, scholarship and service, according to the organization’s website.

“I first heard of Phi Beta Sigma Fraternity, Inc., from some alumni that visited Allegheny during Homecoming last year and had inquired about the organization,” said Baugh.

The Nu Mu chapter of Phi Beta Sigma remained active on Allegheny’s campus through the 1980s, but the organization experienced a decline in participation due to a lack of interest the following decade, according to Heather Moore, assistant professor of community and justice studies.

Moore said the term “historically black” refers to the chapter’s past, as members of the fraternity were African-American students who were unable to pledge to historically white fraternities.

“The event begins at 5:14 because it represents the year Phi Beta Sigma was founded,” said Moore.

Moore is a member of Alpha Kappa Alpha Sorority, Inc., a historically black sorority which was also founded at Howard. She said it is common for these organizations to start functions at times that represent their foundations as a Greek organization. Moore explained that her sorority would begin its functions eight minutes after the hour to signify the year her organization was founded.

Students from various clubs and organizations gathered in the campus center in anticipation for the event. Zachary Matuch, ’17, a member of Phi Gamma Delta, commented on his organization’s presence.

“We are coming out to support them. I don’t know much about them as a group. I know that there are three new members,” said Matuch.

Members from other Greek organizations such as Delta Tau Delta and Kappa Kappa Gamma came out in support, as well as members from the Association for the Advancement of Black Culture.

Students and faculty crowded around the campus center lobby and balcony to greet the three new members. They entered through the campus center’s double doors facing the Gator Quad with Baugh holding a cutout of the organization’s crest and Wild and Bryan walking behind.

The three members entered the campus center dressed in blue shirts, black cargo pants and combat boots. They marched into the campus center in a single-file line, and lined up horizontally, touching at the elbows.

Each of the new members donned blue masks that concealed their identity until the end of the event.

Prior to the presentation, the three new members underwent months of training and rehearsal to be initiated.

“We take classes to learn about the history of Phi Beta Sigma, Inc.,” Baugh said.

Baugh led the group as the three members broke into dance. The performance was a mixture of rap and rhythmic beat. Baugh began rapping and the other members kept beat by clapping their hands and stomping their feet in rhythm with the song.

After the first number, Williams asked the three men to line up in their original positions and answer a series of questions.

“Who is the president of Phi Beta Sigma, Inc.?” asked Williams.

The new members responded to each of the director’s questions in unison. A number of students cheered as the new members answered.

At the end of the event, Williams removed each new member’s mask individually and invited them to tell their story.

Each member took a turn in the center of the campus center lobby to state their name, major and nickname, which will be displayed on their jackets.

The nickname Phi Beta Sigma gave to Baugh was Ozymandias.

“The nicknames are given to us as a name that encapsulates our personality,” said Baugh.

Baugh said his nickname represents his confidence, but serves as a reminder that everyone has bad days and needs to work as hard as they can without making excuses.

Phi Beta Sigma is not a member of the North-American Interfraternity Conference, but instead is a member of the National Pan-Hellenic Council, which consists of historically black fraternities and sororities. The fraternity plans to hold fundraisers and other events this year, but specifics have yet to be determined, Baugh said.