Holiday concert gives back to community 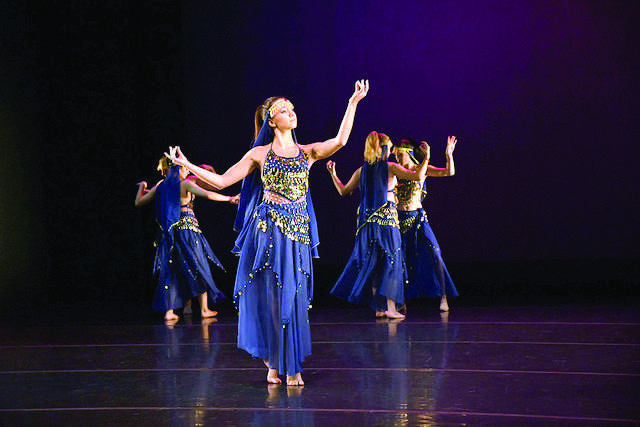 Zoe Husnick, ’18, performs “Arabian” from “The Nutcracker” in the annual holiday concert Cookies and Milk on Sunday, Dec. 4, 2016, in Montgomery Performance Space.

Allegheny’s annual holiday concert, Cookies and Milk, has been a college tradition for over 15 years. The tap, modern and ballet dance classes as well a the student run Jazz and Dance Ensemble performed on Sunday, Dec. 4, in Montgomery Performance Space as part of the concert.

Associate Professor of Dance and Movement Studies Eleanor Weisman has organized the concert for 13 years. She said that the original idea was to provide a holiday event for Meadville families.

“Because the concert is free, we hope that it is a celebratory event for people who might not be able to afford a movie or something that costs money for their children,” Weisman said.

The name “Cookies and Milk” comes from the reception in between performances. There were two performances of the concert, one at 2 p.m. and one at 4 p.m., and refreshments and cookies were served at 3 p.m. The performance included 12 dance pieces. The dance classes and other performers worked throughout the semester in preparation for the concert.

The performance by the “Landscapes of the Body” class was a piece about cooking, and kids from the audience came on stage and participated.

“I really loved the way that the dancers brought the kids up and made them a part of the dance, so it wasn’t just like they were watching a dance,” said Gabrielle Griffin-Maya, ’19. “They were really in it and involved.

This was Griffin-Maya’s first time performing in Cookies and Milk. She danced with her modern dance class and said that she was not expecting the community turnout to be as large as it was.

“The piece that we did was called ‘Flocked,’ and the whole idea was kind of like we were a flock of birds,” Griffin-Maya said. “A lot of the sounds that were in it and the movements we were doing were just trying to emulate the idea of being a flock, being together and being kind of airborne.”

Meaghan Gilbert, ’17, choreographed for and performed in the concert. She said the concert is geared towards children and meant to entertain the community in a fun way.

“I really enjoy community service, but I also enjoy working with kids, entertaining kids and just being silly and goofy, which this show is,” Gilbert  said. “It gets the kids involved, and I also think it’s really important to get Allegheny involved in the community and just have that positive relationship with Meadville community members.”

Gilbert has danced in Cookies and Milk since she was a first-year and helped choreograph the dance minors piece for this year’s concert. Her modern dance class also performed in the show.

“My piece is pointe, and we don’t do a lot of pointe here at Allegheny,” Gilbert said. “It’s really quirky though, so it’s not like your classical ballet piece.”

Cookies and Milk offered a chance for families in the community and their children to come to Allegheny for entertainment.

“I think my favorite part about this show is that it’s for the Meadville community moreso than the Allegheny community,” said Gilbert. “When professors or people from the community bring their kids, it just makes it more fun and laid back. Usually it’s holiday-themed, which is really festive and fun too.”

Along with the dance classes and groups on campus, Alpha Phi Omega Service Fraternity provided a collection box for Toys for Tots at the concert. Going along with the season of giving, attendants were able to donate new and unwrapped toys that will be given to a child during the holidays.

“We are a part of the community whether we think about ourselves like that or not,” Griffin-Maya said. “It’s important to build those relationships.”