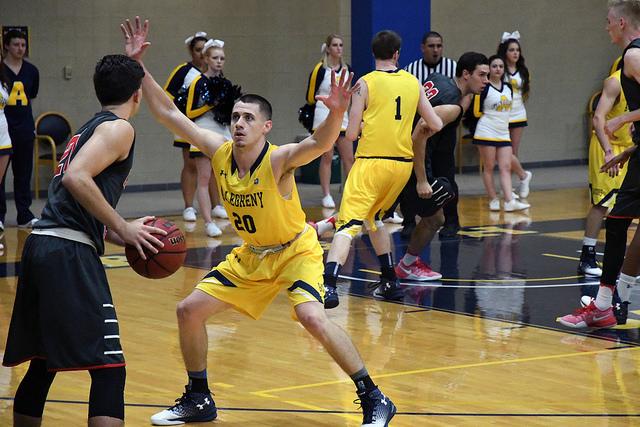 Conor Macomber, ’17, blocks Zach Howarth of Carnegie Mellon University on Wednesday, Nov. 30, 2016. The Gators lost 71-58 to the Tartans in their last non-conference game of the season.

Guard Jamison Nee, ’20, said the team tried to play at a faster pace than they had played in previous games.

“We out-shot Carnegie Mellon, which was good and part of our game plan. And our defense was there—we just came up a little short,” Nee said.

Nee scored five points for the Gators during his 24 minutes of playing time.

“Our goal was to create havoc for 40 minutes and not allow them to run half court offense, and I thought we did a really good job of that,” Simmons said.

Nee said that though the team worked hard, it was a challenge matching up to Carnegie Mellon due to the size of its team.

“The size of Carnegie Mellon—we knew that was going to be an issue. They’re big, and they’re very good, so we knew that would be a challenge. We did not do a very good job keeping them off the offensive glass,” Simmons said.

Nee said the game against Carnegie Mellon gave the team a chance to prepare for playing at conferences since they will compete against big teams that are good offensively.

“I think last night’s game and playing fast prepared us for conference play pretty well because we are going to see the same style of teams in conference games,” Nee said.

Simmons said the team has a couple of improvements it needs to make as conference games approach, including rebounding and picking shots carefully.

“In the three losses we’ve had, we were out-rebounded, so we need to commit to team rebounding and having five guys going after the basketball,” Simmons said. “[Also,] we’re out-shooting our opponents, but we have to take better shots.”

Paulowski said the team can take what it did wrong in the first games of the season and learn from it as they enter conference games.

Nee also said that although the team faces adversity in practice and games at times, it brings the men closer together.

“Our coach always talks about us being a family, and it’s true. If you see the team around campus, we’re always together. That little bit of adversity brings us closer,” Nee said.

Simmons said each season is different and each group of athletes brings new positives and negatives to the team. This year the team is young and the first-year players on the team are getting a lot of play time.

In this season, Paulowski said the team is more focused and wants to improve on their skills and performance from last year.

“We want to win the most games possible, to go out and give it our all everyday and to be happy with the results because we know we did our best,” Paulowski said.

Nee said he is looking forward to changing the culture around basketball at Allegheny this season alongside his first-year class and the upperclassmen that are all committed to making the team a winning team.

The team will play next at home on Saturday, Dec. 3, at 1 p.m. against Wittenberg University in their first conference game of the season.