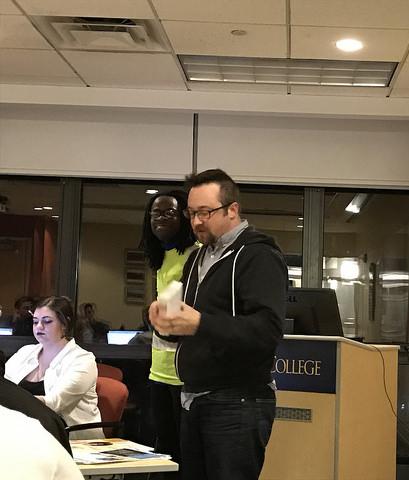 Associate Dean of the College and Director of the IDEAS Center justin adkins and Associate Director Darnell Epps both addressed ASG to discuss the center and its upcoming programs.

Epps, who before moving to his position in the IDEAS Center, worked in the Office of Admissions as a coordinator for multicultural recruitment, said he transitioned to the new position because he felt like he lost track of students after recruiting them for Allegheny. He said he hoped the new position would allow him to build more of a relationship with students.

“I get to work with students here on the ground level,” Epps said. “I get to know [students] as people.”

The IDEAS Center, adkins said, is meant to be a place where Allegheny students, no matter their background, can come together and engage in dialogue about issues that affect the student body as a whole.

While explaining the goals of the IDEAS Center, adkins said the center was originally known as the Center for Intercultural Advancement and Student Success. He said he and Epps hope to build on the work CIASS did, but said rebranding the center was a necessity.

“The work CIASS was doing was great, but it was the worst acronym ever,” adkins said.

As part of their efforts to assist students facing financial difficulties, adkins said the center is beginning a new program called the Mutual Aid Closet. The closet, adkins said, will be filled with everything from basic hygiene products like deodorant to snow boots and coats.

“It is really this idea of us all coming together and working together to make sure all students and all of us are successful,” adkins said.

Students would be able to access the closet by speaking with a staff member in the IDEAS Center, adkins said, which is located on the third floor of the campus center. He said the project was motivated by his own and others experiences of needing assistance in getting through college.

“A lot of us had experiences of people working with us too and helping us get through college, so we wanted to do the same thing for all of you,” adkins said.

Epps said he has already had several students approach him looking for items from the closet. He said he hopes it is a resource that students in need will feel comfortable taking advantage of.

“We are trying to remove the stigma. We were all helped out at one point,” Epps said.

His goal as the new director, adkins said, is to provide students with more of a resource and a place where they feel comfortable spending their free time. The center now hosts Late Late Night events from 7 to 9 p.m. on Wednesday nights, during which students can drop by the center, according to adkins.

While the late night events are meant to be a resource for students who are looking for a place where they feel safe, adkins said the center has also begun programming in collaboration with other groups. According to adkins, the center has already hosted events with student organizations including Young Feminist Leadership Alliance, Student Alliance for Prison Reform and Allegheny Mock Trial.

Epps said they are always looking for more programs to collaborate on, and he encouraged ASG members to submit ideas. He said the IDEAS Center is more than willing to do most of the work—what they want is student engagement.

“We love collaboration,” Epps said. “We want to dialogue.”

Epps and adkins also spoke about the center’s lecture series, which will be bringing in speakers throughout the academic year to speak on various issues related to diversity. The next speaker will be on campus on Jan. 26, 2017.

During her vice president’s report, Sofia Kaufman, ’17, announced her plans to begin an initiative to have a vending machine placed somewhere in the campus center for students to purchase items like cold medicine, ibuprofen, tampons, condoms and pregnancy tests.

“It would probably be in a quiet area for privacy,” Kaufman said.

ASG Sen. Amy Currul, ’17, voiced her support for the project. She said the Allegheny Reproductive Health Coalition tried to get such a machine in the past. Currul recommended speaking with members of the organization for guidance and to ensure that ASG was not “stealing” the idea.

Several members questioned whether Plan B, the emergency contraceptive, would also be sold in the machine. Kaufman said due to the requirements for obtaining Plan B, it could not be sold in the vending machine.

The Class of 2018 called for a vote during the meeting to approve a proxy representative for Sen. Isis Offutt. John Fazio, ’18, was approved by a unanimous vote.

The Class of 2020 also requested a vote to fill a vacant senatorial position. Gillian Greene, ’20, was approved as the newest class senator, also by a  unanimous vote.