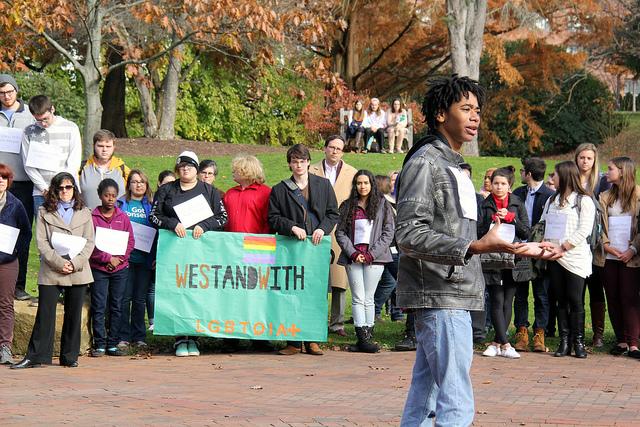 Elijah Prince, ’18, speaks to assembled demonstrators gathered in Brooks Circle to stand with and support groups affected by the election of Donald Trump on Monday, Nov. 14, 2016.

More than 100 students, faculty and staff gathered in Brooks Circle on Monday, Nov. 14, to show support for groups they felt had been negatively affected by the recent presidential election.

The demonstrators gathered at 11 a.m. in front of the campus center to organize. At 11:30 they broke into groups and took positions outside academic buildings. Each group held a sign showing support for a different group.

Yemi Olaiya, ’17, who helped to organize the event, said the idea to stand outside of academic buildings was to catch people as they came out of their classes. Olaiya said that although the election has already taken place, there is still hope, and they want people to know that.

“One of the main goals is to draw attention to the Electoral College vote,” Olaiya said.

The Electoral College will vote on Dec. 19 for the 45th president of the United States. Unlike some states, Pennsylvania delegates are not legally bound to vote in favor of the candidate who won the popular vote in the state.

At noon, the protesters moved to Brooks Circle, lining the perimeter with people holding signs. Members of the protest were encouraged to speak about how the recent election made them feel.

Luka Crozier, ’19, said they felt the protest was an important show of support for the people who genuinely feared for their safety in the wake of the election.

“After the news about not only the election, but the violence that started after, I was scared, and I think a lot of people were and are,” Crozier said.

Crozier hopes the protest will be the first of many at Allegheny.

Andrew Bloeser, assistant professor of political science, was among the protesters and helped to explain to students passing by what their aims were.

“We are out here standing with those groups who [Donald Trump] has attacked on his way to the presidency,” Bloeser told one student.

President of the College James Mullen was one of several administrators present.

Mullen said the protest was an example of the involvement and dedication of Allegheny students.

“One of the reasons I have always found hope in our students is they are passionate and care deeply,” Mullen said. “That sort of passion and commitment is at the root of our democracy.”

Many of the students at the protest expressed their anger and frustration over the recent election. Danielle Flexer, ’17, said she was participating in the protest largely because of the hate that she said surrounded the 2016 presidential election.

“I am here today to take a stand against that type of rhetoric,” Flexer said.

Giancarlo Aguilar, ’20, spoke about leaving Mexico to have a better life with his younger sister. He talked about waiting tables and gardening to help support them both. He said in a recent phone call with his mother, she told him that even if he was sent back now, he had succeeded.

Aguilar said he did not feel he had succeeded and asked how it was fair that he might be sent back.

“What type of country are we making that we are separating families,” he said.

Stephanie Swarthout, ’19, said as a member of the LGBTQ community, she felt like she was no longer accepted or valued in a country that would elect Trump president. She said in the days following the election she felt as if she was alone and she does not want anyone to feel that way.

“I am here today because I want others to know … that there are people out there who don’t support him,” Swarthout said.

In the midst of the violence and hate that she said the election has created, Swarthout encouraged everyone to smile.

When Hamza Masaeed, ’20, moved from Jordan to the U.S., he said he was amazed at the level of freedom and acceptance of other cultures he found.

“I fell in love with those values,” Masaeed said.

Masaeed said the outcome of the election troubles him and that many of his friends in Jordan told him he should return to Jordan. He said he saw the disappointment in the election results in many of those assembled.

“We can overcome this, and I am sure we will,” Masaeed said.

Olaiya said she felt the event had the desired effect and showed that the student body will not stand for the perceived hateful rhetoric.

“I think today went very well. This is anything but a passive movement,” Olaiya said.

According to Olaiya, the greatest success of the event was being able to bring the community together to support each other amid the hateful rhetoric of the election.