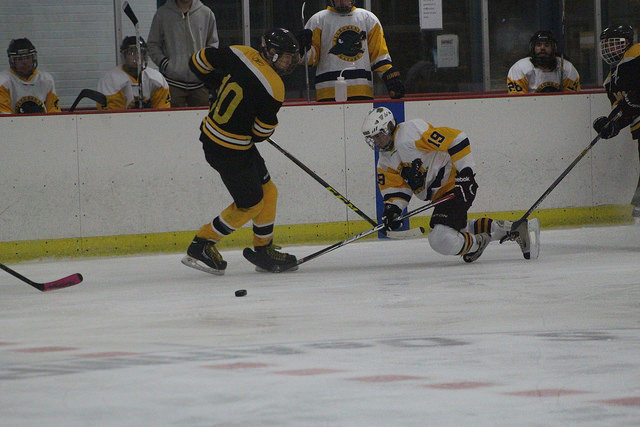 Defenseman Taylor Redman, ’20, fights for the puck against a player from The College of Wooster on Friday, Nov. 11, 2016. The Gators lost 9-2 to the Fighting Scots at home.

The Allegheny club men’s hockey team fell 9-2 against The College of Wooster on Friday, Nov. 11.

“We played well defensively and stuck to our strategy, but we got tired and couldn’t keep up with them,” said right wing Trevor Gant, ’18.

Goalie Hayden Moyer, ’17, said he thought the start of the game went well and the energy from the crowd was motivating.

“I thought the boys kept their legs pretty well the first period, and then I’d say we were more organized in the neutral zone after we came back from the break and were slowing them down better, which was good,” Moyer said.

Moyer added that when Wooster had zone possession, Allegheny was able to stop them from scoring too much.

Club President and left wing Josh Cohen, ’18, said the team did a better job of playing physically and staying out of the penalty box against Wooster.

“I don’t think we were super outskilled; we were pretty similar skill level. I think it’s taxing on our guys when we play long shifts of the game,” Cohen said.

The Wooster game brought the team’s record to 0-4, but the men are hoping to improve in the rest of the season.

“We’re working to make [our record] better, but we were kind of expecting that 0-4 start. If we could have snagged a game or two, that would’ve been nice, but since that didn’t happen, we have an uphill battle. But we were expecting that anyway,” Moyer said.

The team played Wooster for the first time this season two weeks ago, losing 12-0 with only six team members traveling to play.

“They’re the best team in the league, and we played them two weeks ago, and I think we did a better job this time,” Cohen said.

The second game against Wooster was the first game that the team has had most of its members available to play. For earlier games, many players were busy with fall sports that have recently ended.

“It helps build up the team and find out how each of us play with each other, and we can improve from there and use everyone’s strengths the best we can,” Gant said.

For the first four games of the season, the team played Edinboro University of Pennsylvania and Wooster, twice each.

“Those were supposed to be the two other best teams in our league, so what we were hoping to have happen is that we could use those games to get organized, and then when everyone comes back, we’ll have a system to fit them into and more legs to help us work at,” Moyer said. “I think that’s one thing we can take away from the Wooster game—I thought the neutral zone system that we were running to slow people down, once we started getting it going, it worked out pretty well.”

Moyer and Cohen agreed that having full lines will help the team keep up with other teams and build team chemistry among team members.

“Last year, we didn’t have as many guys as we do this year, so the guys on the bench were huffing and puffing by the second with the long changes,” Moyer said. “I’m looking forward to seeing how that’s going to play out in terms of people connecting. And hopefully that will mean that I will see less shots.”

Gant added that though the team has more young players than recent years, they are playing more for purpose this year and are more organized.

“I think we’re more motivated to play this year than we were last year, and the league is definitely more structured than it was last year,” Gant said.

Looking ahead, the men are working to make it to the league playoffs and find success in the rest of their games.

“We realistically can make the playoffs. There’s [six] teams in the league and four go to the playoffs, and I think we can be in the top four,” Moyer said. “I think in the rest of the season, the goal is going to be to not lose another league game, so we’ll see if that happens. It’s kind of aggressive, but that’s why you set goals.”

“I think we’re in a much better spot than we’ve been in previous years thanks to us getting an influx of freshmen players, and we’ve been able to change the culture around the team,” Cohen said. “Moving forward, we’re all pretty excited about the opportunity we have to win some games and make the playoffs.”