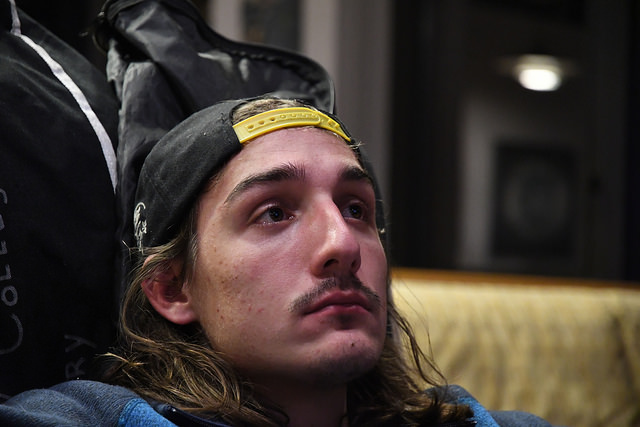 Jonah Raether, ’18, reacts to President-Elect Donald Trump's lead prior to the final outcome of the election in the Grounds for Change coffee shop early in the morning of Wednesday, Nov. 9, 2016.

Donald Trump was elected the 45th president of the United States on Tuesday, Nov. 8. The business mogul and reality television star defeated Democratic nominee Hillary Clinton, former U.S. secretary of state and U.S. senator from New York, after receiving the majority of electoral votes, the Associated Press reported at 2:32 a.m. on Wednesday, Nov. 9.

“She fought very hard. Hillary has worked very long and very hard over a long period of time and we owe her a major debt of gratitude for her service to our country,” Trump said. “Now it’s time for America to bind the wounds of division.”

The Democratic nominee conceded the election in the morning of Wednesday, Nov. 9. She encouraged her supporters to accept the results of the election.

“We have seen our nation is more deeply divided than we thought. But I still believe in America, and I always will,” Clinton said. “And if you do, then we must accept this result, and then look to the future. Donald Trump is going to be our president. We owe him an open mind and the chance to lead.”

While Trump won the election, it was not widely predicted. FiveThirtyEight, an election analysis website that correctly predicted the outcome of every state in the 2012 presidential election, said Clinton had a 71.4 percent chance of winning the presidency at 10:41 a.m. on Tuesday, Nov. 8.

Mike Pence, governor of Indiana and vice president-elect, said the results showed the will of the people.

Trump’s election comes after a two-term Barack Obama administration. Obama is on track to finish his second term with the highest approval rating of any outgoing president since Bill Clinton, according to Gallup.

Allegheny students, faculty and staff gathered in Tippie Alumni Center from 7 p.m. to 11 p.m. for an election watch party, sponsored by the Center for Political Participation. The CPP screened live coverage of the polls as votes were counted.

The 596-day election, which began with Republican Ted Cruz’s announcement to run for president in March 2015, was marked by divisiveness, according to Assistant Professor of Political Science Andrew Bloeser.

Trump began his campaign on June 16, 2015, in a speech in Manhattan’s Trump Tower, which some have deemed racist.

“When Mexico sends its people, they’re not sending their best. … They’re sending people that have lots of problems, and they’re bringing those problems with us,” Trump said in his campaign announcement. “They’re bringing drugs. They’re bringing crime. They’re rapists. And some, I assume, are good people.”

While some have called Trump’s rhetoric divisive, the president-elect said he will “be a president for all Americans” in his acceptance speech.

“Working together, we will begin the urgent task of rebuilding our nation and renewing the American dream,” Trump said. “I’ve spent my entire life in business, looking at the untapped potential in projects and people all over the world. That is now what I want to do for our country.”

The watch party in Tippie ended before the final results of the election were reported. Viewers cheered when Clinton was projected to win Virginia, though they predicted the outcome of the election for Trump by 11 p.m. when the party ended.

“I worry for the precedent this sets for future elections,” said Madeline Hernstrom-Hill, ’18.

Noah Dawgiello, ’19, a Trump supporter, said he was surprised to see Trump’s lead and election.

“I am honestly shocked that this happened, but happy that it did,” Dawgiello said.

Hernstrom-Hill said she believes Trump’s election will have disparate negative impacts on older generations of Americans.

“I worry for my parents who are reaching retirement age, and if our economy crashes they wouldn’t be able to retire,” Hernstrom-Hill said.

President of the College Democrats Mark Myers, ’19, said the election will have an impact beyond politics.

“By empowering a man like Donald Trump, you are in turn empowering people to commit heinous crimes because you’ve validated them,” Myers said.

Jonah Raether, ’18, said one potential complication of Trump’s presidency is the impact it could have on minority groups.

Dawgiello said that while Trump has said things considered prejudiced towards various populations, his support for the president-elect comes from policy.

“I’d just like to emphasize that I support Donald Trump because I have valid reasons that don’t have to do with racism, sexism, homophobia, or any of the ’isms,” Dawgiello said. “That I’m not a terrible person, and we can get along just fine even though we disagree politically.”

“We’ve spent a year and a half bringing together millions of people from every corner of our country to say with one voice that we believe that the American Dream is big enough for everyone, for people of all races and religions, for men and women, for immigrants, for LGBT people and people with disabilities,” Clinton said. “For everyone.”

Clinton also used her concession speech to give a message to her supporters.

“To all the women, and especially the young women, who put their faith in this campaign and in me, I want you to know that nothing has made me prouder than to be your champion. I know we have still not shattered that highest and hardest glass ceiling, but some day someone will, and hopefully sooner than we might think right now,” Clinton said. “And to all the little girls who are watching this, never doubt that you are valuable and powerful and deserving of every chance and opportunity in the world to pursue and achieve your own dreams.”

Bloeser said he has some concerns about Trump’s presidency.

“Whereas Hillary Clinton has really detailed plans, … Donald Trump has not been very detailed in his plans, including major plans like building the wall,” Bloeser said.

Trump said a key goal for his presidency is to create jobs by rebuilding infrastructure.

“We’re going to rebuild our infrastructure, which will become, by the way, second to none,” Trump said. “And we will put millions of our people to work as we rebuild it.”

The new administration will begin work before taking office in January 2017, according  to Trump.

“We’re going to get to work immediately for the American people,” Trump said.

Another issue Bloeser said may come with a Trump presidency is Trump’s fiscal responsibility. Trump wants to increase government spending, including massive immigration reform that calls for a wall along the southern border of the U.S., according to Bloeser.

“He literally has no governing experience,” Bloeser said.

Trump won Pennsylvania and its 20 electoral votes, including 67.24 percent of the popular vote in Crawford County, which includes Allegheny College, according to the Associated Press.