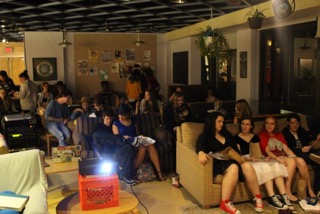 Students get in the spirit of the “Rocky Horror Picture Show” during Grounds for Change’s annual screening of the movie on Satuday, Oct. 29, 2016.

The cult classic “Rocky Horror Picture Show” filled Grounds For Change with students eager to participate in the annual event on Saturday, Oct. 29.

Attendees were given goodie bags filled with toast, confetti, rice, copies of The Campus, and party hats for them to throw and wear at various times during the movie with instructions on when to do so.

The festivities began before the movie. Students showed up in costume and red “V’s” were drawn on the foreheads of those who had not seen the movie before. The “V” stands for virgin.

“I mark virgins with red lipstick,” said Becca Duch, ’17, a board member at GFC.

For those who had never seen the film before, they may not know what they are getting themselves into.

Balijah Grant, ’20, had never seen the movie before this event, and was marked with red lipstick accordingly.

“I don’t know what I was expecting, but that wasn’t it,” Grant said. “[However,] I’ll probably be back next year.”

Micah Hayes, ’19, was one of the virgins but said she was drawn to the interactive aspects of the movie.

The movie started with the song “Science Fiction Double Feature” sung by a pair of disembodied red lips.

Students filled the air with disquietude and handfuls of white rice when the opening wedding scene began, but their excitement was quelled when the projector broke. The event coordinator for GFC, Lucie Shiffman, ’18, had to run to the library to get a new one.

The movie started back up, and the commotion continued as people shouted at the characters and sang along to the music, even donning their provided newspaper when it began to rain in the film.

Students sang along to “Time Warp” and got out of their seats and started dancing along with the instructed movements.

This collective two-sided interchange continued throughout the movie, with attendees often jeering and yelling at the characters as the movie progressed along its predetermined destiny.

Everest Rain, ’20, a “Rocky Horror” virgin, enjoyed the communal give and take of the picture show.

“I liked that there was props and stuff,” Rain said. “[But] it was kinda hard to follow the plot.”

When the movie was over, people exited the venue quickly, leaving a ground covered in rice and confetti. A few volunteers willing to clean it all up lingered as well.

Shiffman was one of those volunteers. She also put together the goodie bags, purchased the movie rights. She said the work she put into the event was worth it because of the tradition.