New bee or not new bee: that is the question 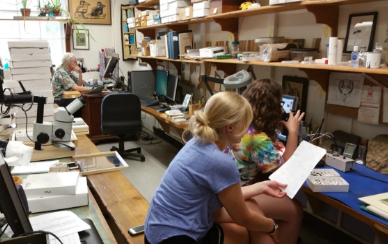 Paige Hickman, ’17, and Kaye Moyer, ’19, check out bee samples in the United States Geological Survey Bee Identification and Monitoring Lab in Beltsville, Maryland, while Sam Droege, wildlife biologist and lab head, examines their samples during the summer of 2016.

There, Sam Droege, wildlife biologist and head of the lab, will help them sort through and identify bee specimens that were sampled around the Meadville area over the summer of 2016.Droege, according to Hickman and Kaye Moyer, ’19, is the leading expert of identifying native bees. But the last time Hickman visited this lab—during the summer of 2016, with Moyer—he came across a sample that he could not identify.

“He said, ‘I can’t pinpoint this one. It might belong to several different genera [the organizational level above species], but it does not fit the mold of any of them,’” Moyer said.

The sample—a single specimen of the genus Lasioglossum, of which Moyer and Hickman had collected several hundred—was sent to Jason Gibbs, research associate at Michigan State University. Gibbs confirmed that the specimen did not belong to any known species of bee, according to Hickman.

The anomaly specimen suggests that the two Allegheny students may have come across an entirely new species.

“This is not uncommon, because there are not a lot of people out collecting bees, especially in northwestern Pennsylvania,” Moyer said. “There was only one bee that was undescribed, and you can’t really describe a species until you have multiple [samples].”

Currently, the two use a key of morphological—biologist lingo for shape-based—characteristics to identify each species. The new specimen could not be matched to any one species based on shape alone. Hickman said that if the two recover more samples of the same kind, they might send them to other labs for genetic tests.

The sample was recovered as a part of a survey Hickman and Moyer conducted over the summer of 2016 that was designed to gauge the diversity of native bees across a gradient of different areas based on land use. The pair set traps, which mimicked wild flowering plants, near the Robertson Athletic Complex, around the Allegheny College campus and in downtown Meadville.

Moyer said that the students are comparing nesting sites in areas with concrete over ground surfaces with areas without concrete.

“The native bees we are looking at make nests in the ground,” Moyer said. “We are also looking at the different types of flowering plants, to see if plant diversity has a relationship with bees.”

Native bees, unlike the social honey bee, are mostly solitary insects, according to Moyer. While only one honey bee species lives in North America, native bees—often referred to as “wild” bees, since the honey bee is domesticated for agricultural purposes—tend to be more diverse. Hickman and Moyer found 24 genera of wild bees over the course of their research.

Wild bees are not always necessarily native to the Americas, according to Beth Choate, associate professor of environmental science at Allegheny. Many species of bees are foreign, but have since co-evolved with local plants.

The survey was part of a line of studies that date back to 2014, when Hillary Krill, ’15, conducted a baseline study of native bee diversity on campus at different sites. Krill, originally an environmental studies major, was inspired by an article she read where Whole Foods displayed a hypothetical produce aisle devoid of all products made possible by pollinators, according to Choate.

Krill approached Choate with the idea to survey native bees around campus, and Choate agreed. Physical Plant does not use synthetic pesticides or fertilizers, which makes the area a good place to study natural trends, according to Choate. Krill learned how to trap bees from one of Droege’s papers, and in the summer of 2014, she began collecting samples with the help of Moretti. The following summer, Moretti joined up with Hickman to expand the study.

“Paige [Hickman] and I revamped [Krill’s study] to expand to the sites across Meadville and to incorporate land use,” Moretti said. “Unlike honey bees, the wild bees we look at tend to nest in the soil or in cavities. … The soil downtown has a lot of disturbance from traffic and mowing, but up at Robertson, you might find more nesters because the soil is undisturbed. Downtown, you might find more cavity nesters.”

The pair set up 17 sites in total: four in the Robertson Athletic Complex, four on campus and five in downtown Meadville, including in assistant professor Ian Carbone’s backyard.

Moretti’s senior comprehensive project examines whether bee diversity might be correlated with the level of human use of land. Urbanized areas include more concrete, asphalt, buildings and other surfaces that bees cannot dig into, according to Moretti.

Hickman’s comprehensive project examines plant diversity with relation to bees. In June through August 2015, Hickman and Moretti surveyed bees throughout campus and Meadville. A year later, Hickman decided to repeat the sampling during the same time frame, but worked through September as well to see if bee diversity changed over time. Moyer then joined the group.

“Bees have different flight times and emergence times,” Hickman said. “We see different bees during certain times during the summer.”

The other difference between the two summer surveys was in the details. During the former summer, the researchers only sorted samples by genus. In 2016, they decided to zoom into the species. Hickman and Moyer contacted Droege and spent two days at his lab, taking advantage of his skill and experience, as well as a large reference collection of bee specimens. During this sorting, the unidentifiable sample was found.

The sample was one of 635 collected bees of the genus Lasioglossum, to which more than half of the summer’s samples belonged.

“You can infer from the genus what kind of nester it is,” Moyer said. “Lasioglossum live in the ground. They’re solitary. [The sample] was found out where they store the compost by Robertson.”

Most of the bees collected in the survey came from this site, according to Hickman. It also contains the highest diversity of flowering plants.

Prior to conducting the survey, Hickman and Moyer determined, through background research, that native plant diversity plays an important role in native bee diversity, at least on the genus level.

“[We are] recreating things that others have done and seeing if the same pattern follows in Meadville,” Moyer said. “And what’s interesting is that we do sort of see a trend—there is slightly more diversity in bees at Robertson than other types of sites. But we don’t see as big of a decline down that land-use gradient as we expected.”

Hickman and Moyer’s research comes at a time when pollinator populations are declining globally due to climate change, the use of pesticides and habitat fragmentation, usually from agricultural development and urbanization, according to Hickman and Choate.

“If we were to lose these pollination services, we’d be screwed,” Hickman said. “They are called ‘services’ because there is an economic value placed on pollinators—about 80 percent of all flowering plants rely on pollinator services.”

The research is important on a local level because it surveys pollinators in areas away from local farms, according to Moyer. Different plants are affected by different pollinators, so biodiversity might differ between farming and non-farming habitats. Losing pollinator services for non-agricultural plants could still impact local insect and animal populations, according to both Hickman and Moyer.

“If you take out one part of that food web, the whole thing could collapse,” Moyer said.

The study set a couple of state records by uncovering certain species of bees in the state of Pennsylvania for the first time. A few specimens showed up in unexpected places, such as a couple of species from Lasioglossum in Carbone’s backyard, which involved more concrete, traffic and ornamental flowers than are typically associated with Lagioglossum, according to Hickman.

The specimen, if confirmed to be a new species, could lead Hickman and Moyer to publish their findings.

For guidance moving forward, Choate contacted Gibbs—who still has the original sample—and asked what the team’s next steps should be. The answer? Keep collecting.

“In order to name a species, you have to have several individuals, and then you publish a paper that describes [the species],” Choate said. “And we have a lot more to find.”

Hickman and Moretti’s upcoming trip to the Beltsville lab will be to help the team sort through the remainder of the 2016 samples. The hope is that Droege—who composed and published the online key that the Allegheny researchers use for identification—will be able to quickly sort through their samples, and might turn up more of the unknown samples.

“[Hickman and Moyer have] done such a good job of curating everything that we have this reference collection,” Choate said. “It doesn’t make sense not to keep going—we have such a good reference for these areas, it would be wonderful to keep going.”

The next step, according to Choate, is to look at different habitats, and how bee diversity changes among them. Practical questions follow, including how to educate homeowners about the plants they keep.

The larger picture into which Hickman and Moyer’s research fits—which dovetails nicely with Choate’s research interests—is agriculture. Specifically, Choate wants to study how moving away from monocultures can help farmers. Increasing plant diversity, in other words, might lead to an increase in insect diversity, which could be beneficial in certain contexts.

“If you take a field of corn and add some wild flowers around the edge, would you get more beneficial insects, like predators—insects that eat pest insects—and pollinators?” Choate said.

Globally, native bee populations are declining because of a lack of viable food, according to Choate. Hickman and Moyer’s research may begin to help answer the question of what is influencing bee populations by establishing a baseline of diversity.

“How do we know how what is influencing populations if we don’t know what is here to begin with?” Choate said.

Choate said she was impressed with the work that Hickman and Moyer have put in so far.

“They came up with the project, they contacted Sam [Droege], they scheduled the time to go down there and see him, they have taken the project and ran with it, and it’s awesome,” Choate said. “They’re devoted to the project. They’re invested, and they care about what happens.”