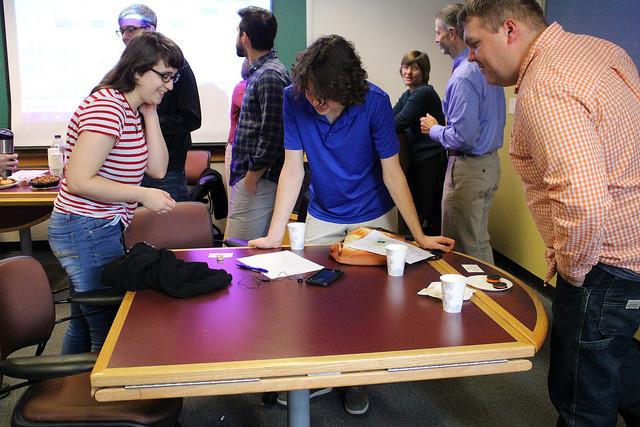 Students gather in the Steffee Hall as part of a Gator Day event on Tuesday Oct. 25, 2016 to learn about chemistry courses and curriculum.

According to an email sent to Allegheny Faculty on by Associate Provost and Director of the Gateway Terrence Bensel on Dec. 9, 2011, Gator Day was first implemented into the academic schedule for Tuesday, Oct. 23, 2012, and Tuesday, April 2, 2013. The intention was for Gator Day to occur twice every academic year—once each semester.

Beginning in the 2016-17 academic year, Gator Day will now only occur during the fall semester and will be replaced with an event at the end of the spring semester to acknowledge student accomplishments.  The name of this new event has not yet been determined.

“The faculty was the entity that voted Gator Day into existence four years ago, and it is the faculty who voted last spring at one of their meetings to change and push the final Gator Day to the last Tuesday of the [spring] semester,” said Jim Fitch, director of career education.

Fitch said Gator Day was implemented to get more students involved with a community-based program that aims to  reflect on students’ work and  accomplishments.

“It’s been fairly successful so far, but the question was how can it even be more successful,” Fitch said.

The faculty, Bensel said,  was well within its rights to change Gator Day.

Bensel said he believes some faculty members started a petition to remove Gator Day from the academic calendar last year.

A change in the focus of Gator Day was proposed, so instead of removing Gator Day all together, the college kept the one in the fall semester and replaced the spring observance with a day to celebrate student accomplishments, Bensel said.

According to Fitch, suggestions began being made to have a day of recognition for seniors at the end of the academic year.

“It’s not a bad idea for us to see all the different things that students are up to. Students do a lot and a lot of it gets lost in the mix,” said Patrick Jackson, the Nationally Competitive Awards Advisor.

Jackson said he does have concerns. He believes that an event like Gator Day should be held both semesters because the schools need to stay connected with students to prepare for the present and their futures.

“My one concern is that you can’t have any spring programming where you lose the opportunity in the spring to follow up with students,” said Jackson.

The change, Jackson said, puts more pressure on the fall Gator Day to showcase opportunities for students and to ensure students follow through on these opportunities. An advantage, however, is that more students would be able to celebrate their accomplishments while attending Allegheny.

With the new change to the academic calendar, classes will now officially end on Monday, May 1, 2017, instead of that Tuesday.

The Undergraduate Research, Scholarship, and Creative Activities Office, headed by Aimee Knupsky, has taken the lead in coordinating the student accomplishments day.

“Aimee Knupsky is incredibly capable, and I expect that she’ll put on a good program,” said Jackson.

Knupsky said almost every college or university that is a member of the Council of Undergraduate Research has a day dedicated to displaying student research projects, which is why Allegheny has decided to implement its own. She said the event will allow everyone to attend because classes will not be in session.

Knupsky said Allegheny has achieved great success with undergraduate research and this is something that should be recognized.

For the student accomplishments day in the spring, an outline of events has been developed.  In the morning, there will be a few sessions that have not yet been determined.  After a break for lunch, the poster session for the senior projects, as well as other events and workshops will occur.

Later, three or four seniors will be selected to present their projects after the poster session.  Then the Honors Convocation will occur.  A reception for parents, students and faculty will finish the day. Senior projects will be presented, as they have in previous years, but with the opportunity to share them with more people, Bensel said.

URSCA would like to tie the celebration day eventually to the different events of the departments, like adding an art gallery or a dance recital, Knupsky said.

Torrence and Ostrom are members of the Students for Undergraduate Research, Scholarship, and Creative Activities. They are also  planning the students accomplishments day in the spring. They asked departments to nominate students to apply to be ambassadors, according to Knupsky.

The faculty hopes that with the implementation of the student celebration day students will become more involved and will attend events throughout the day, Fitch said.  He said this will allow students to see what they can do during their time here at Allegheny.

They are also seeking more recognition for students’ work.  He says many people are unaware that Allegheny was recognized last year as the number one school nationally for collaborative faculty-student research, Fitch said.

Fitch said another important element of the event is it gives parents an opportunity to see what students can and have accomplished at Allegheny.

“We don’t want to have a ton of things going on,” Knupsky said. “We want there to be one thing that everybody goes to so it can be a community experience.”

To plan events for Gator Day, the college places an application online for faculty, staff and students to submit proposals for the Gator Day committee to review for the upcoming event, said  Christina Moreschi, assistant director of career education.

According to Moreschi, there are four standard sessions and several events that fall outside of those sessions.

“I actually had a couple students submit proposals this year, which was exciting because, in the past, we didn’t really get student submissions,” Moreschi said.

Moreschi said the First Generation/Low Income club submitted a proposal for their event, “We’re Number One, Literally,” and another student proposal was the “Know Your Rights on Election Day.”

Bensel and the planning committee are working on developing learning outcomes of Gator Day to assess what participating students are learning from these events, Moreschi said. She said a theme is connecting what a student can do at Allegheny to what they can do after graduation.

Gator Day was rejected the first time it was proposed to faculty, Bensel said. However, some students felt strongly about the event and brought it to the committee for a second vote.  They passed it the second time.

“The primary language in that proposal was to set aside one day every semester for programs that promoted academic success, career opportunities and a greater sense of community at Allegheny,” Bensel said.

He said that he believes Gator Day has achieved its initial goals, despite criticism of the event.  He said he sees many good things happening.

“The cynical view is that it’s just a day when students can go out Monday night and drink,” he said. “The bars in town have Gator Day’s Eve specials; I don’t know if that’s true or not.”

In previous years, many seniors said they felt Gator Day did not have events for them.  Fitch said there has always been a push for all students to go to events.

Moreschi said she believes the plan was always to include all students, but she understands that seniors may feel there are not as many events for them because a large portion of the day is dedicated to department open houses.  Career-focused events are meant to target the senior class, she said.

Knupsky said the celebration day would provide seniors with a day specifically for them.

“We’re really excited about [the celebration day],” Knupsky said. “We hope we involve as many different constituencies as we can.”

URSCA has worked with offices inside the Gateway to see how they can make the event work for everyone, Knupsky said.  In the future, they would like to take the celebration into the town after the reception so we can form a stronger bond with the town, she said.