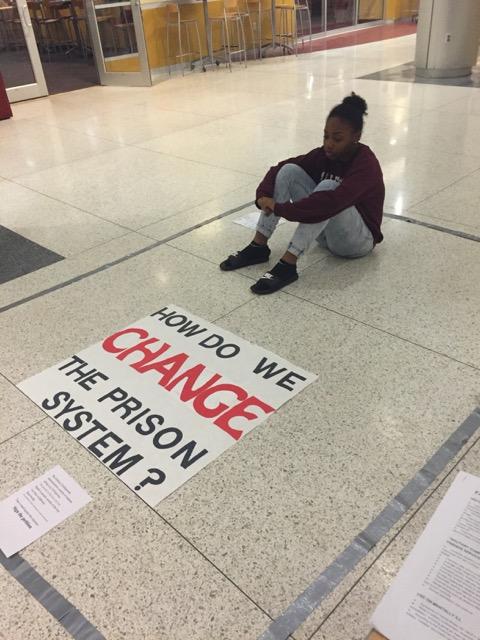 Nadja Knox, ’17, sits in a 7 foot by 9 foot box in the campus center lobby on Wednesday, Oct. 19, 2016, as part of a 24-hour demonstration organized by the Student Alliance for Prison Reform to raise awareness about solitary confinement.

Nineteen students got inside the issue of solitary confinement from Tuesday, Oct. 18 to Wednesday Oct. 19.

The students were part of a demonstration by the Allegheny Chapter of the Student Alliance for Prison Reform, which had participants sit silently and alone for an hour in 7 by 9 foot box meant to represent the dimensions of a typical prison’s solitary confinement cell.

There was a student in the box for 23 hours, with the final hour being left empty in honor of those still serving time in solitary confinement.

SAPR is a national organization that works to raise awareness on college campuses on issues relating to the United States prison system. In addition, the organization works to achieve change at both the national and state levels.

“We try to propose a solution and we send those to our national chapter,” said Natasha Torrence, ’17, a member of the Allegheny chapter’s executive board.

Torrence said solitary confinement may seem like a good idea on paper, but in reality has long-term mental and physical health effects.

“Social isolation is just as bad for your health as smoking is,” Torrence said.

According to Torrence, inmates in solitary confinement often fall victim to depression.

There are approximately 80,000 men, women and children in solitary confinement in the United States, according to the Bureau of Justice. Due to a lack of a federal reporting system on how many prisoners are in isolation at any given time, however, this figure is a decade old and does not include those residing in jails, juvenile facilities and immigrant detention centers.

Ada Zech, ’19, a member of SAPR’s executive board, said the organization hopes that their demonstration will help to raise awareness about the realities associated with solitary confinement.

“We are trying to show people the real effects it has on people,” Zech said.

In conjunction with the demonstration in the lobby of the campus center, SAPR also hosted a guest speaker who lived in solitary confinement for more than five years in New York State.

Five Mualimm-ak was born in Ethiopia, and grew up in various cities in the U.S. He was living in Niskayuna, New York when he was arrested on a myriad of weapons charges. He was released after many of the officers involved in his case were arrested on charges relating to corruption.

Since his release, he has become an advocate for prison reform. Mualimm-ak said that living in solitary confinement changed him.

Mualimm-ak said he went into confinement with pre-existing mental health conditions including bipolar disorder and schizophrenia, which were exacerbated by his time in isolation.

“You didn’t know if it was night or day,” Mualimm-ak said. “I would think I would see my mother out of the corner of my eye.”

His time in confinement, Mualimm-ak said, has forever changed him.

“I am a different person,” he said. “I am forever damaged.”

Mualimm-ak said the conditions in solitary confinement in Rikers Island Correctional Facility were awful. He said the temperature of the cells could drop to below zero degrees at times and at others be swelteringly hot. He said several inmates actually froze to death.

The fact that seems to be forgotten, according to Mualimm-ak, is that most of those in solitary confinement are there for nonviolent offenses within the prison system itself, and were not sentenced to it.

In Mualimm-ak’s case, he was sent to solitary after he was written a series of “tickets” for rule infractions which included possessing 24 weapons, theft and hoarding. According to Mualimm-ak, the weapons were pencils, the hoarding was an extra pillow and the theft was a fellow inmate giving him some magazines, which was against prison policy.

After being released from prison, Mualimm-ak was legally declared disabled. He said that those who spend time in solitary usually carry the effects with them for the rest of their lives.

“If you don’t come in with [a mental health issue], you will leave with one,” Mualimm-ak said.

Furthermore, Mualimm-ak said that those with pre-existing conditions are given little to no care while they are serving their time.

Mualimm-ak said he hopes that events like SAPR’s will help to raise awareness among college students about the flaws in the prison system. He said he feels that many people underestimate the ability of the the younger generation’s ability to implement change.

“They are really taking charge of what this country should be, ” Mualimm-ak said.

According to Mualimm-ak, people often forget that behind every major movement, there have been thousands of young students working to implement change.

Mualimm-ak said the message he wants to convey is that the issues of solitary confinement and the prison system are not something that affect a small number of people. For many Americans, it is an all too real reality.

“This is a fact of life for millions of people,” Mualimm-ak said.