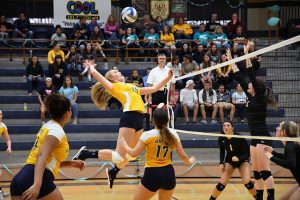 Yutong Wang YUTONG WANG/THE CAMPUSLauren Duffy, ’20, hits the ball over the net during the Battle 4 Bridget game against Denison University on Saturday, Oct. 15, 2016. The Gators lost 3-1 to Denison.

The women’s volleyball team hosted its Battle 4 Bridget fundraiser on Saturday, Oct. 15. The team used the opportunity to raise awareness of fallopian cancer and raise money to donate to the Yolanda G. Barco Oncology Institute.

The women sold T-shirts and bracelets at the football game, the men’s soccer game, the women’s soccer game and their own game in addition to having a pumpkin-carving contest where fans could donate money and put it in the pumpkin they thought was the best. Overall, their fundraising efforts raised about $3,000 for the institute, and they are still collecting donations.

Defensive specialist Rachel Slotterback, ’19, said meeting the alumnae who came to the game and talking about Sheehan was a high point of the weekend.

“We met her first ever team, which was awesome, to hear all these stories about how she used to coach, and how she’s changed, and how the program changed and how she’s shaped so many lives cause she’s been coaching for thirty-some years,” Slotterback said.

According to Slotterback, over the course of the season, the women have been sending texts, cards and flowers to Sheehan to show their support for her.

“I know she’s had a rough couple days lately so we’ve all been trying to text her and let her know we’re thinking of her,” Slotterback said. “We all made signs to hang all over the gym for our game on Saturday, and two of them were sent to her hospital room. Just being there and supporting her through this tough time is our main focus throughout the season.”

According to Trautmann, the team will be collaborating with the NCAA to support Sheehan.

“NCAA is teaming up with us in the spring for the NCAA DIII Week to bring awareness of Coach Sheehan and raise money then, and we are still taking donations through the link on our website,” Trautmann said.

Trautmann said that the atmosphere at the game on Saturday was reflective of the team’s continuing positivity during Sheehan’s fight against cancer.

“We took the third set, and the second set was 25-23 but we kept our attitude positive the entire time because we knew it wasn’t about us at all,” Slotterback said. “We could have gotten down on ourselves, but Coach was watching so we wanted to keep an upbeat atmosphere for her. I would say we were aggressive and all clicking. It just didn’t work out in the end.”

Sheehan was admitted to the hospital on the same day as the game, but watched livestream coverage of the game.

“We definitely had high energy and knew what we needed to do and we did it. Even though we lost, we still played well and as a unit,” said right side hitter Lauren Bodi, ’19. “They were a very scrappy team, and got everything up. They had a couple very good power hitters, so we needed to up our blocking there a little bit more.”

Trautmann said controlling errors on the court was a challenge, but the team worked hard to fight back.

“We gave Denison a lot of points from our errors, and we have to overcome that and control the ball if it gets out of control,” Trautmann said. “Hopefully they make a change going forward and finish strong. For the conference, we only have two games left, and then we have to [win] at least two to make it into the conference tournament.”

Bodi said she is looking forward to being with her teammates and supporting each other, and their coach, through the remainder of the season.

“I know it’s been a really rough season with everybody dealing with Coach, so it’s nice to be there together and as a unit,” Bodi said. “We’ve been practicing really well the past two weeks so hopefully we will get a couple of conference wins on Saturday and again on Wednesday, and finish off the season strong.”

The women will play their last home game of the season on Saturday, Oct. 22, at 2 p.m. against Kenyon College.