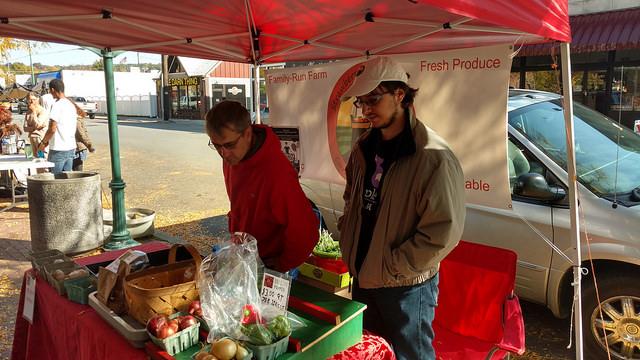 James Coxon, a produce gardener, and his son, Ryan, examine their stock at the Meadville Market House farmers market on Saturday, Oct. 15, 2016.

For gardeners and farmers in the Meadville area, October brings the beginning of the end of the harvesting season. For Kerstin Martin, garden manager at Allegheny College, it means assessing the success of a mobile farmers market trial run.

The end of the market’s trial run came Sept. 28. The market was set up in the Holland Towers apartment complex and used produce grown from Allegheny’s Carr garden—known as the Carrden—to test whether the location could provide a viable market for local farmers.

The market ran for six weeks, starting on Aug. 24 and running every Wednesday. It received positive feedback from residents of Holland Towers, according to Kerstin Martin, the garden manager at Allegheny. Customers were routinely surveyed as to how they heard about the market, whether they were buying foods that they normally could not and whether they were satisfied with the quality of the food.

“The residents seemed happy,” Martin said. “We received the same kind of response that we had on campus.”

The idea for the market can be traced back to Martin’s first experience with gardening in Meadville. In January 2013, Martin moved to Meadville from Monroe, Maine, where she worked on North Branch Farm.

Faced with the task of managing the Carrden, she reached out to local farmers for advice on best practices to control conditions like pests, weather and soil.

Martin wanted an idea of the movement of local foods through Crawford County. In spring 2016, she worked with Andy Bloeser, assistant professor of political science, to conduct a survey of Meadville residents and farmers. Residents were asked about their interest in buying local foods and what barriers they felt prevented them from doing so. Farmers were asked a related question: how easy is it to sell?

“We saw that the needs of residents and the needs of farmers met up,” Martin said. “Transportation is a barrier to many people, and we asked if having a mobile market would be valuable and useful and most people said it would be.”

The idea for the mobile farmers market was born. A retrofitted truck or bus could hypothetically move around the Meadville area and sell produce at different stops to customers who might not otherwise have access to locally-grown food.

The immediate questions that followed the idea were: how could farmers be convinced to risk their own profit with such a program, and how could the best locations for selling be determined?

To answer the former, Martin and her colleagues decided to use produce from the Carrden, so that no risk was transferred to the farmers themselves. As a starting point, the market was set up in the community center of the Holland Towers apartment complex, located a few blocks down from the Meadville Market House.

For pricing the produce, Martin and her colleagues used a common strategy of local farmers: they surveyed grocery store prices and tried to match them competitively.

To make the market mobile, Martin is working with the Crawford Area Transit Authority, which has volunteered to donate an old bus that would have otherwise been retired in the spring.

“We would retrofit [the bus] and take out the seats, potentially put in coolers or storage space and we would be able to hold multiple markets per day or per week around the community,” Martin said.

Any funding necessary would come from a grant received by the college in 2014, which set up the Community Wellness Initiative, a group of faculty and staff working with partners in the Meadville area. Money for the initiative comes from an anonymous donor, according to Martin.

Once mobile, the market would source from as many local farmers as possible, using the Carrden produce to fill in for any missing or underrepresented products. The number of farmers represented—and the types of crops they will try to sell—will depend wholly on the time of the year, according to Martin.

At the moment, the best outlet for local growers to sell is the weekly farmers market hosted at the Meadville Market House every Saturday. Farmers and gardeners arrive usually around 8 a.m. to sell to residents in the community, according to James Coxson, a market gardener from Conneaut Lake, Pennsylvania.

Coxson, along with his wife, Robin, and sons, Ryan and Jordan, run a small business called Strawberry Lane Produce. Coxson and his family began growing and selling strawberries in 2008, and expanded to a wide range of produce in 2010 when they began to sell their goods at the Market House.

“Everybody has their niche customers, and niche things that they sell,” Coxson said. “When you’re here, you’re selling to the same people all the time. We cater a little to people’s special wishes. After doing this for so long, you know what to bring and what not to bring.”

Pricing can be difficult in a farmers market setting, Coxson said. He named tomatoes as an example: if a typical grocery store sells them at two dollars per pound, a market gardener might sell a quart weighing two pounds for four dollars. Customers who are not used to these price-per-unit discrepancies may be discouraged at what at first looks like a steep price, but is in reality fairly consistent with the competition.

“The hardest part is expanding and making it a viable business,” Coxson said. “[This includes] having enough stuff to sell, getting it all to the right venues and setting the right prices.”

But the market is not impossible to break into. Garrett Gleeson, ’12, moved back to the Meadville area last winter after having graduated from the University of New Hampshire with a master’s degree in microbiology.

He now operates a small farm and sells a variety of goods at the Market House market. His wide range of products allowed for a relatively easy transition into the business of selling produce.

“My advantage is having a little bit of everything—not having to sell a lot of one item,” Gleeson said. “I wasn’t too familiar with the market, so [having variety] allowed me to adjust what I brought and bring things that other people don’t have. On the other hand, growing a variety of vegetables is difficult. You have to have experience growing a lot of different things.”

Gleeson’s experience with farming began at an early age—his parents were homesteaders who often grew their own food. After earning his master’s degree, he took up an internship based at the Nook and Cranny Farm in Ithaca, New York.

Both Coxson and Gleeson said that using farming as a sole source of income can be difficult. But, according to Gleeson, there are still viable options for anyone who wants to enter the business.

“There are a lot of ways to start a farm that are cheap,” Gleeson said. “Gardening is a good place for someone to start. Vegetables are easy, and there are usually not ordinances against them, so they are a pretty safe bet. You don’t have to own land—you can rent land. You can start smaller than you think. You have to be creative.”