Students bring a slice of Islam to campus 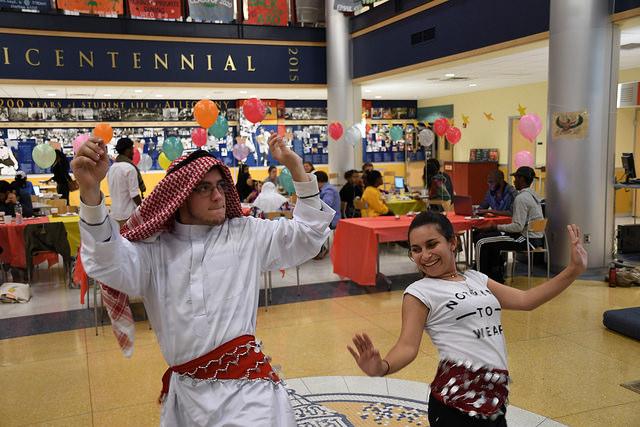 Eid al-Adha is one of two major feasts in the Islamic calendar and is commonly known as the feast of sacrifice.

Sunday’s event showcased Arabic culture with Arabic-style food catered by Parkhurst, traditional music, dancing, henna and Arabic tea. Mariam Nashaat, the Fulbright foreign teaching assistant for Arabic said the event was comforting for members of the Arabic community and educational for others.

“Usually we celebrate with food. Usually we meet with our family [on] this day,” said Nashaat. “Because we are here, we decided to celebrate with our friends … and we try to mix it with the Arabic tradition … and parts of [the] culture.”

“[People] don’t know a lot of the Arabic world,” said Nashaat. “I think these type of events help them to know more about another culture, more than the political and the economic. To be open to the world is something I think [is] good for your mind and for your character.”

Hayley Eckhardt, ’18, attended the event on Sunday and said that she enjoyed learning about another culture.

“It was not what I expected, I didn’t realize it was such a big event,” said Eckhardt. “There were a lot of different things going on, I thought that was really cool.”

Adrienne Krone, director of Jewish life, saw the event as a good way to learn about the people who make up the Allegheny community.

“I think it’s important to celebrate the holidays that are important to our students,” said Krone. “We have muslim students here who wanted to share their celebration of eid with the campus.

“I think it was a really practical way for people to engage with Islam and see some things that they don’t see on the news and that maybe aren’t part of discussions about Islam in the media, which are basically the holidays and the everyday experience of being a muslim.”