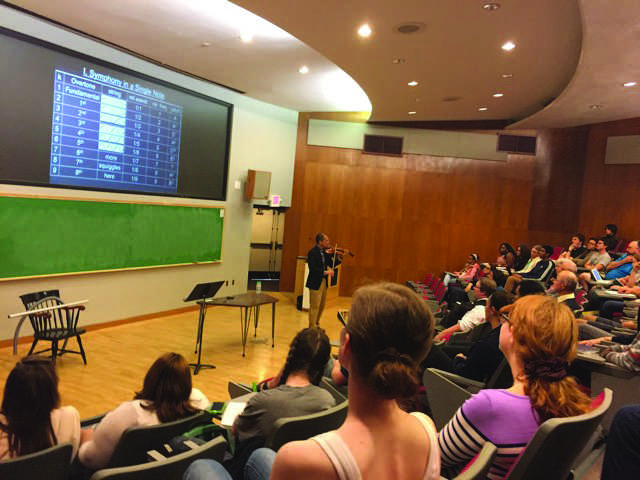 David Kung, professor of mathematics at St. Mary’s College of Maryland, gave two separate talks to students, staff and faculty on Monday, Sept. 26, one in the Pelletier Library and one in Quigley Auditorium.

Kung was invited by Rachel Weir, associate professor of mathematics at Allegheny.

“We bring in one speaker every semester, to give a broad math talk aimed at students,” Weir said. “The program has been running for around thirty years now. “

Kung engaged an audience of mostly faculty and staff in the Pelletier Collaboratory room in his first talk, “Rising to the Challenge of Diversifying STEM Communities.” The talk focused on an achievement gap between men and women and that between minority and white students in science, technology, engineering and mathematics fields at the post-secondary education level.

Caryn Werner, professor of mathematics and department chair of women’s, gender, and sexuality studies at Allegheny, formally introduced Kung to the audience, though Kung had already introduced himself personally to each audience member as they came in.

Though billed as a lecture, Kung opened up the topic to discussion at various points during the talk, with a bit of added humor.

I am going to ask you at various points to turn to the people around you and discuss things,” Kung said. “This is part of my personal pledge. I refuse to stand up in front of an audience and drone on for an hour about interactive pedagogies. I can’t stand the irony of it.”

Beyond this statistic, the numbers shrink for women. Less than 20 percent of physics, engineering and computer science degrees go to women; in mathematics, that number is 33 percent.

Kung then engaged his audience with what he presented as a “challenge scenario.” He posed the audience with a hypothetical—a calculus class where students work in groups of threes, and in one group comprised of two men and one woman, the female participant is less active than usual—and then asked them to discuss what they would do given the circumstances.

“In early studies on physics in Minnesota, studies were done on student groups of three,” Kung said. “They found that every time a group included two men and one woman, the woman was statistically less likely to move on and do well in the class.”

The typical solution, according to Kung, was simply to never arrange student groups in such a manner.

“But that only fixes part of the problem,” Kung said.

Kung displayed a different NSF graph, detailing Ph.D. recipients in STEM fields. According to the data, men earned more Ph.D.s than women in all STEM fields except biology in 2012. In the same year, just under 30 percent of Ph.D.s in mathematics went to women.

Kung continued with data on minority students. According to the NSF, less than 20 percent of all undergraduate degrees in 2012 were awarded to minorities, even though minorities make up more than 30 percent of the U.S. population. In mathematics and engineering, minorities received less than 15 percent of degrees; in physics, less than ten.

To illustrate the classroom reality behind these data, Kung posed another challenge scenario: audience members envisioned themselves as overseeing a classroom activity where students paired up. While most students quickly found partners, according to the scenario, the only two non-white students in the class paired up.

“Asking everyone to pair up is treating the students equally, but not fairly,” Kung said. “Doing so does not give equal opportunity for everybody to have equal treatment in that course.”

Kung later explained that minority students might come from poorer neighborhoods, and since public schools are funded by property taxes, poorer educational systems. Even minority students who come from middle- or upper- class backgrounds may still experience in-class discrimination, as illustrated in the hypothetical scenario.

In another hypothetical, a student named Ashanti walks into a classroom wearing a “#BlackLivesMatter” shirt. A white student, clearly annoyed, asks, “Don’t you mean all lives matter?” Kung posed the question: what, if anything, do you do as a teacher?

Kung offered from his own experience that in similar situations he has used what he calls “microaffirmations,” the positive analog to microaggressions.

“These are little things that you can do to affirm something, like making sure you communicate to the offended person that you understand the problem,” Kung said. “This is incredibly important in these situations.” 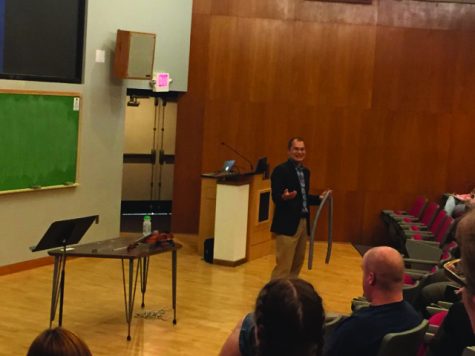 To shift the focus of the talk from student to teacher, Kung transitioned to the history of minority disparity inside the classroom.

According to Kung, the first black students to attend calculus courses at the University of California, Berkeley failed out of those courses at a much higher rate than their white peers. Popular theories as to why this was included poor preparation, lack of motivation, lack of family support and socio-economic forces.

“But the first black students in Berkeley were coming from upper-middle class families,” Kung said. “None of these issues fit.”

Instead, according to Kung, the disparity resulted from social forces playing out inside the classroom.

Kung then cited a mass survey conducted in 1997 covering the main reasons why undergraduate students choose to leave STEM fields. Of all students surveyed, only 27 percent cited conceptual difficulties with the topic as a reason for leaving; in contrast, 75 percent cited inadequate advising and help, and 90 percent cited poor teaching by STEM faculty.

Kung posed another hypothetical: a student named Tyrese is not coming to his teacher for help, and he is not reaching out to his classmates. Kung then challenged the audience to invert the statement to focus less on Tyrese and more on the institution in which he finds himself.

“In this case, we, as teachers, are not doing a good enough job of articulating the rules of college,” Kung said, in answer to the hypothetical. “We need to articulate what office hours are and when you should come for help.”

Kung admitted that oftentimes students themselves may be unequipped to take advantage of everything that a teacher has to offer.

For converting a statement which on its surface is about a student into a deeper-rooted problem with the institution, Kung recommended adopting a certain mindset toward modes of education.

“I think there is a continuum along which most people who teach fall,” Kung said. “When you ask someone, ‘what do you teach,’ they can either say, ‘I teach math’ or ‘I teach students.’ The people who teach ‘math’ simply stand up and speak the content.”

Teachers whose attitudes focus on the students will tailor their classroom experiences toward their learners, with the goals of the latter walking away better masters of the subject, said Kung. Teachers who focus on the subject itself will ignore individual student needs, potentially precluding many students from achieving to their fullest potential.

Along this continuum, more classroom interaction signals a teaching style closer to the “teaching students” end, which Kung referred to as the hypothetical left. According to Kung, the further toward this end of the continuum one goes, the lower the drop/fail rate is among all students.

“On this continuum, you should ask, ‘Where am I? Where are my colleagues? And where would I like to be?’” Kung said.

According to a National Academy of Science review, most passive lecture classrooms—those that would fall on the hypothetical right of the continuum—have a drop/fail rate of 50 percent, said Kung. The National Academy of Science responded to the results: “If this were a medical study, we would be forced by ethical considerations to cut the study short and provide the experimental group with the control treatment.”

Kung agreed with the sentiment.

“It is malpractice to continue with this model,” Kung said. “The worst way to teach, according to all evidence, is to talk the material. The more interactive a physics class is, the smaller the gap will be between men and women, minorities and whites in the classroom.”

Kung asked the audience to think about why teacher-to-student interaction would help close the achievement gaps in the classroom.

Kung said the key difference between the two teaching models is the publicity that student’s abilities get from having an interactive model. In an interactive classroom, students are more like to become aware of each other’s true strengths and weaknesses, rather than perceived differences based on implicit biases on gender or race.

Kung ended the interactive talk asking the audience to brainstorm how to shift classroom atmosphere to the left of the teaching continuum.

Kung’s attention was brought to the subject of equity in STEM fields during his undergraduate education. He worked in an emerging scholars program that aimed to increase the success of underrepresented students.

“Even before I had my own classroom, I had seen the power of engaged, interactive teaching,” Kung said.

Jim Fitch, director of career education, was one of the Allegheny staff members in attendance.

“This workshop reinforced that individual instruction is more important than the group,” Fitch said. “It reinforced the need to connect to students on an individual basis when Professor Kung showed how STEM is a leaky pipeline.”

In the afternoon, Kung gave a second talk entitled “Harmonious Equations: A Mathematical Exploration of Music.”

The talk had three distinct sections, or as Kung called them “movements.” During the first, Kung explained how mathematics helps us understand music and how music can help us understand math.

According to Kung, each string on a violin creates multiple overtones when played. Kung demonstrated this principle by recording himself on the computer program Audacity and using the sound it captured to plot the spectrum of a sound wave.

Kung then used a branch of mathematics called differential equations—mathematical functions that relate an equation to its derivative—to show that each solution of the equation created by the sound spectrum represented a different overtone.

Kung used the example of the Millennium Bridge in London, England, to show resonance in action. The bridge’s opening was delayed for a few months because the resonance of the bridge matched the resonance of pedestrians walking. According to Kung, this caused the bridge to sway laterally.

The final “movement” covered how the German composer Johann Sebastian Bach used a field of math called group theory in order to create music. According to Kung, Bach used group theory long before the field was discovered.

Bach’s piece, the “14th Canon on Goldberg Ground,” contains multiple inversions, or rearrangements of notes within chords, and retrogrades, or reversions of pitches, Kung said. When each variation of the same few notes played at the same time, the effect is to create a beautiful melody.