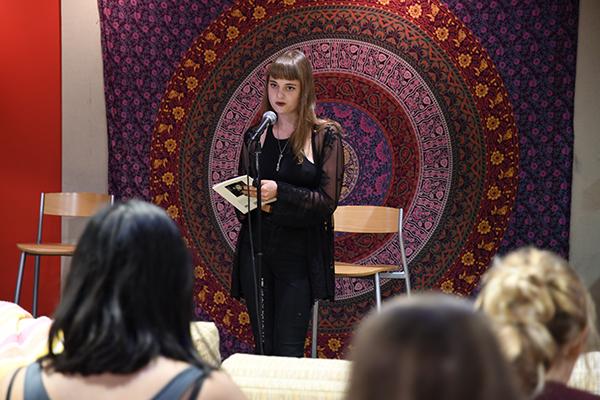 “Overkill” publishes issues each semester and serves as a creative outlet for Allegheny students. The theme for this year’s issue is “Over the Top.” “Overkill” accepts various forms of writing and are considering accepting films for next semester’s publication. The 2016 fall semester issue will be printed after Thanksgiving.

“I was up here all summer, and I had a lot of time on my hands,” said “Overkill” President Maggie Dugan, ’18. “I started to plan how I wanted ‘Overkill’ to look for this year. We want to make it more of a space where people can express more of their creativity and have a safe space to do so.”

Dugan said she hopes that more first-years will get involved with the magazine.

Louis McUmber, ’19, performed on piano and guitar. He has been taking lessons since he was a kid.

“I really [dreaded] it,” said McUmber. “Getting the basics down is really difficult.”

McUmber can play the piano, guitar, bass, the ukulele and just started learning how to play the drums.

“It’s a discipline. It’s like learning a language,” McUmber said. “If you keep playing and keep focusing on it, it really starts to click.”

Michael Ross, ’18, played two musical pieces, “Little Wing” by Jimi Hendrix, and “Old Man” by Neil Young. He admires each musician and said the song lyrics are really important to him.

“My aunt and uncle are both musicians in Nashville, which is where I am from,” Ross said. “[Music] has been around me my whole life. My mom’s husband is a really awesome guitar player and that motivated me.”

Ross was wearing a Jimi Hendrix T-shirt, and said he often wonders what Jimi Hendrix would have been like today if he would not have passed away at 27 years old.

Ross does not have a lot of experience performing in front of crowds and said he gets nervous when doing so.

“Thank you to GFC and ‘Overkill’,” Ross said. “They should do this more often.”

“Overkill” gave each performer a shirt to thank them for their time.