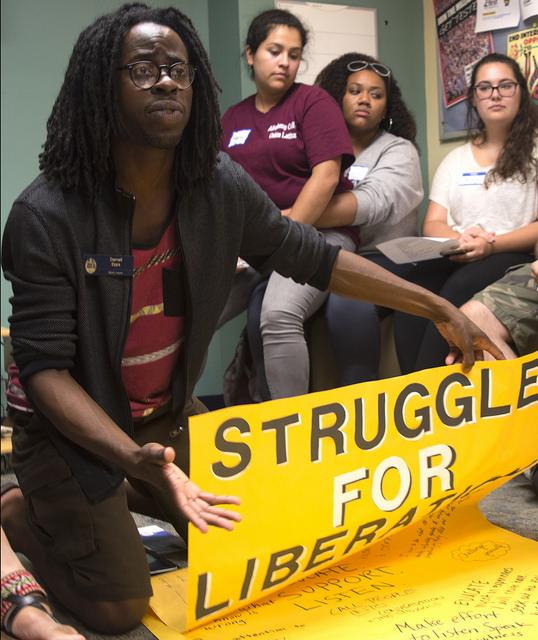 Darnell Epps, associate director of the Inclusion, Diversity, Equity, Access and Social Justice Center, displays a poster, titled “Struggle for Liberation,” to hang in the Henderson Campus Center during a meeting on Wednesday, Sept. 7, 2016.

Editor’s note: justin adkins spells his name in all lowercase.

The Inclusion, Diversity, Equity, Access and Social Justice Center held a meeting among leaders of student diversity organizations on Wednesday, Sept. 7, to discuss their plans for the upcoming semester and ways to foster intersectionality and collaboration.

Associate Dean and Director of the IDEAS Center justin adkins said the idea for the meeting stemmed from a handout he found in the office about the Diversity Council, an organization of student diversity groups founded in 1994.

The handout stated that a main goal of the organization was to promote collaboration to “discuss issues of diversity” and give Allegheny College’s diverse students “a united and stronger voice.”

“The idea is to get people who represent different identities to come together and share those experiences,” Mattwig said.

President of the Association for Asian and Asian American Awareness Jeannie Choi, ’17, said her group, too, wanted to collaborate with other groups to foster intersectionality and inclusivity.

While a goal for the meeting was to promote collaboration, much of the discussion centered around events the individual groups planned for the upcoming semester.

Eliza Weisman, ’17, who serves as the president of the Gender and Sexuality Alliance, said her organization hopes to bring guests to campus whose work focuses on intersectionality.

“justin [adkins] has been almost too helpful with that,” Weisman said. “It’s greatly appreciated.”

The Reproductive Health Coalition hopes to bring to campus a 24-hour kiosk where students can purchase condoms, forms of emergency contraception and other health essentials, according to club president Sean McClain, ’17.

“My hope for this club is to fill in that gap,” Mai said.

Toward the end of the meeting, the discussion steered to how the diversity groups can collaborate.

Francisco Guzman, ’19, of M.O.C.A.A., said the organization’s members are passionate about assisting other diversity groups.

“We have a lot of young men willing to help,” Guzman said.

The idea of holding a banquet where every diversity organization has its own food table was introduced by Young Feminist Leadership Alliance President Chenoa TracyStone, ’17.

Darnell Epps, associate director of the IDEAS Center, said a way to foster more collaboration was to have each organization sponsor a Late Late Night program, which are held weekly at the IDEAS Center.

A problem for many organizations at the meeting was the instability of their advisers. ReproCo and YFLA are still without advisers, and adkins is serving as the GSA’s interim adviser.

“A lot of your advisers are non-tenured faculty,” adkins said. “That’s not sustainable.”

The group adjourned the meeting, making plans to meet monthly.

“I thought this was super awesome and I want to do it as much as possible,” TracyStone said.