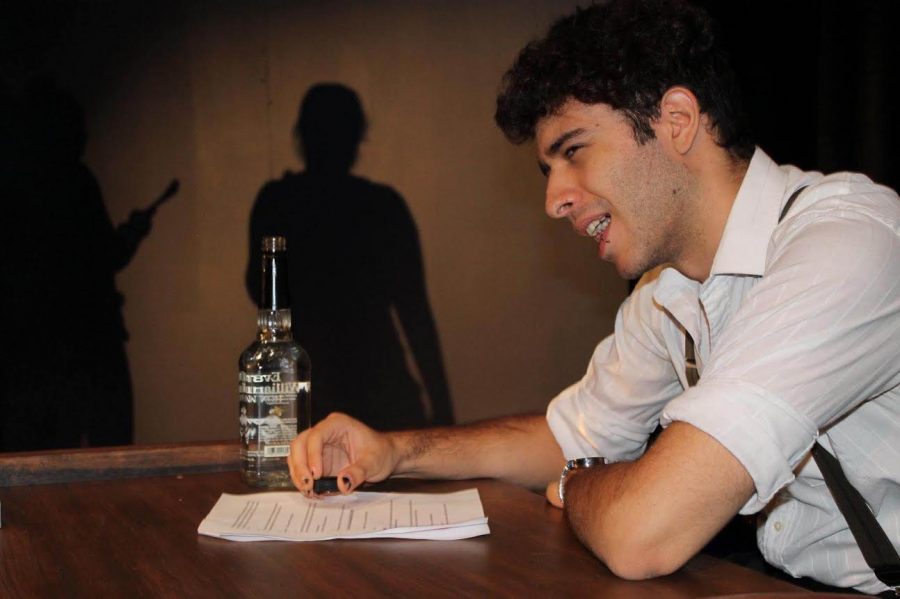 Approximately 35 students came together to develop, write and perform six plays in 24 hours for the third annual Student Experimental Theatre 24 Hour Theatre Fest. The fest began at 7 p.m. on Friday, Sept. 2, and the participants had until 7 p.m. on Saturday, Sept. 3 when they then performed their plays for the general public in Arter Little Theater.

SET has been operating for 50 years and is Allegheny’s entirely student-run theatre organization according to Elizabeth Colarte, ’17. Colarte is on the board that organized the fest along with Simon Brown, ’19.

“The 24 Hour Theatre Fest is pretty simple,” said Brown. “In 24 hours, a bunch of people come together and get split up into groups. Every group gets two different props and one line [and] have to create a show.”

The plays were around 10 minutes in length and entirely written, directed and acted by the members of the groups.

According to Brown, one of the most difficult parts of the fest is memorization.

“Having to memorize a whole script in 24 hours is a difficult task,” said Brown. “But all the groups were off book. I don’t think a single one of them had their scripts out on stage.”

Despite the short time frame the groups were given, they were not expected to stay up and work for the whole 24 hours. According to Brown, people worked until 10 p.m. or 11 p.m. on Friday night and met up again at 9 a.m. on Saturday morning to prepare for the performances that night.

“Every group has a line that they have to use. This year’s was ‘there are slugs everywhere.’ … The groups have to somehow incorporate that line into their shows,” said Brown. “It was really interesting to see how they not only incorporated that line but also all of these random props that we made them use. One group … had a tape measure and a conductor’s hat and from that they got border control and being under 5 feet tall.”

From the line and the props they were given, the groups created six different plays.

“Poitrine de Canard” was a film noir style play about a detective attempting to find a woman that an old friend had told him to check out. It followed typical film noir tropes and everyone died at the end.

“Death of an Athlete” was a parody of Arthur Miller’s “Death of a Salesman”. The play reversed the roles of father and son, where the father was an athlete whose son wanted to be a salesman. The group used most of the main points from the original play and incorporated much of the original dialogue as well.

“Bathroom Mistakes” was an abstract, comedy, noir, vignette series of people’s mishaps in the bathroom, such as finding yourself in a stall with no toilet paper.

“Case of the Elusive Criminal and Also It Was My Birthday” was a comedic, film noir style play. The play was a flashback that followed an old police officer as he reflected on his first time on the force and a wild goose chase after a murder that turned out to be a mistaken package delivery.

“The Border” was a play about the land of Shortlandia, where everyone who lived there had to be under five feet tall, and those characters who did not meet the height restrictions were kicked out.

“Workers” focused on a group of disgruntled Walmart employees and looked at their lives in the breakroom.

Matt Lis, ’18, was in the group who created and performed the play “Workers”.

“It was kind of like Walmart workers meets ‘Mean Girls,’” Lis said.

This was the second time Lis participated in the fest, and he said that his favorite part of the fest is the collaboration that the nature of the fest demands.

“It’s awesome that all of these people come together and they make these extremely entertaining short plays within the span of 24 hours,” said Lis. “It’s one of my favorite things of the entire year. It’s so much fun and the audience I feel, really enjoys it too, and that just makes me like participating even more. I like it a lot because it is a great way to incorporate first year students into the theatre department … it’s a really good bonding exercise that gets people excited about the rest of the year.”

Allison Condon, ’17, has been involved in the theatre fest since its inception three years ago.

Participants are not required to act during the final performances, but can work with their respective groups on any parts of the creative process throughout the 24 hours. This year the participants ranged from first years to seniors who all had varying degrees of theatre experience.

“It’s really interesting to see how all of these different people are coming together,” said Brown. “A lot of them don’t even know each other … and they’re coming together, working and creating a 10 minute show in 24 hours, and that’s pretty amazing.”