The office has been without a permanent director since late 2015 with the departure of Jeffrey Schneider. Sean Kennedy, of Dolores Stafford & Associates consulting firm, began as interim director on Nov. 9, 2015.

Dean of Students Kimberly Ferguson, who headed the search committee for a permanent director, said Awadi was one of 70 candidates identified by Spelman Johnson, an executive search firm. 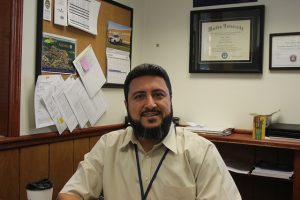 “The committee screened it down to 10, and then we did phone interviews, and Awadi was one of the four who came to campus,” Ferguson said.

Awadi served as the assistant director of campus safety at Henry Ford College in Dearborn, Michigan, from 2009 until coming to Allegheny.

While at HFC, Awadi helped to improve the college’s system for taking incident reports. He said the system, which had been adopted by Allegheny prior to his arrival, makes reporting incidents simpler.

“It’s more accurate because it meets the requirements of the Department of Education,” Awadi said. “It’s more detailed and it more accurately captures Clery Act violations.”

Awadi said the way the system breaks down reports makes it easier for the department to compile and submit its annual Clery Report to the Department of Education, which reports all crimes committed on college campuses.

After seven years at HFC, Awadi said he wanted to come to Allegheny because he was ready for something new.

“It was a challenge. I came from Henry Ford which had zero residents. … I saw it as an opportunity to better myself and really put into practice what I have done and trained [for],” Awadi said.

In addition to the challenge of coming to a residential college, Awadi said he also chose Allegheny for its academic standing. He said he wanted to work at an institution with that reputation.

While interviewing for the job, Awadi brought up the idea of changing the name of safety and security as part of his effort to improve the relationship between students and public safety lfficers.

Ron Cole, provost and dean of the college, said the name change represents the broader goal of improving student-officer relations on campus.

“My hope is that our students will know our public safety officers and they will view them as allies,” Cole said.

Cole did not serve on the search committee, but did review the finalists’ applications.

As the new director, Awadi said he hopes students will get to know each of his officers by name and the officers will build relationships with students in turn. He said he calls this “community policing.”

“I have asked them to start making themselves visible to the point where students see them walking around, not just driving around,” Awadi said.

Ferguson said it was this part of Awadi’s approach that made him stand out to the search committee.

“The one thing I really liked about his presentation was his community-based policing, getting the officers out of the car,” Ferguson said.

In an attempt to make himself more visible to students on campus, Awadi said he requested that he have a uniform as well, so he could be easily identified as an officer. He said he enjoys the academic atmosphere at Allegheny and enjoys hearing what students are working on.

“I love interacting with students, and this atmosphere here is a research atmosphere, so my knowledge on research could really benefit students,” Awadi said.

In addition to making his officers more visible, Awadi said he hopes to also get students involved with the department. He said he hopes to implement a Gator Patrol Service, where students will be trained to work with security.

“They will be escorting students around…in addition to [Public Safety],” Awadi said. “It’s more of a peer to peer [service].”

According to Awadi, six or seven students have already expressed interest in the program.