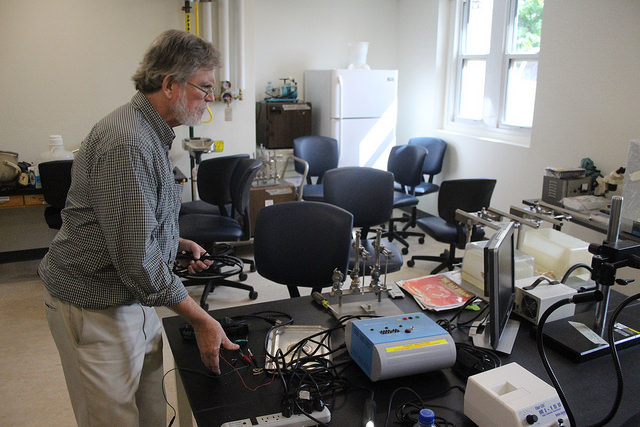 Jeffrey Cross, professor of psychology and neuroscience, sets up his lab on the bottom floor of the recently renovated Carnegie Hall on Thursday, Sept. 1, 2016. Cross said a benefit of his lab is a direct connection to the animal colony through another room.

The second phase of renovations to Carnegie Hall occurred between May and August, 2016, as workers improved the main and bottom floors of the building.

In 2014, the second floor of Carnegie was renovated to improve faculty office and research space, according to Sarah Conklin, associate professor of psychology and chair of neuroscience.

Kevin Wagstaff, the architect with Perfido, Weiskopf, Wagstaff and Goettel who designed the renovations, said the cosmetic need for the second phase of the renovations was more dire than it had been prior to the first phase.

“Whenever you renovate part of a building, the part you didn’t renovate looks worse than it did before,” Wagstaff said.

Andrew Marsic, the project manager at Landau Building Company who oversaw the renovations, said the college contracted the company to work on the building. Landau then hired a Pittsburgh architectural firm, PWWG, to design the refurbished building.

The mechanical renovations included work on the building’s heating, cooling and electrical layout, according to Wagstaff. The bottom and main floors were refurbished to provide more “inviting” corridors and have more seating space for students.

“Since psychology as a field has moved toward doing experimental research, our building needed to be updated to have places where students could do that research,” Conklin said.

Carnegie was last renovated in 1996, according to Conklin. She said the bottom floor still contained private study corrals, similar to the ones on the top and bottom floors of the Pelletier Library, which she said did not provide the experimental research atmosphere students and faculty needed.

Gillette said the needs of the faculty were considered and used during this summer’s renovations.

“That building was originally built as a chemistry building,” Gillette said. “Through the years, it’s progressed into some different uses, and now we’ve got it configured to be most beneficial for the users and how they conduct their research and their classes.”

Wagstaff said the building in general, including the bottom floor, needed to be updated.

“There were a lot of things to be done to bring the building to modern standards,” Wagstaff said.

According to Conklin, desks in Carnegie classrooms were replaced with tables that can be used as individual desks, or small or large tables. She said they allow for more “flexibility” in teaching.

Conklin also said the chalkboards in classroom were replaced with whiteboards, and that walls in the main floor hallway now double as whiteboards. The ramp to the building was also updated to be compliant with the Americans with Disabilities Act.

Construction began “right at commencement,” Gillette said, and ended just before students moved in to begin the fall semester.

“I don’t think you’d be able to find anybody who has a problem with anything that was done,” Conklin said.