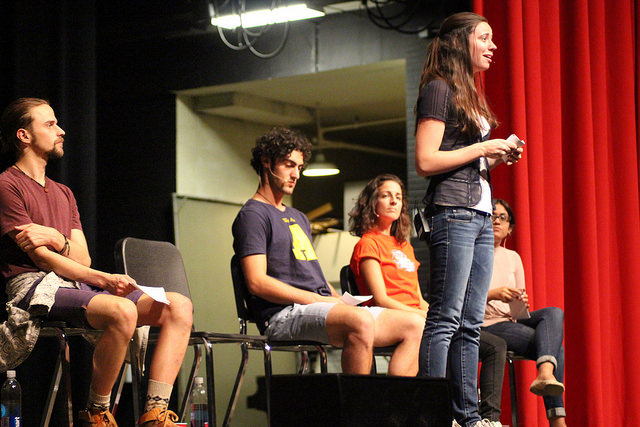 Five actors from Speak About It give a presentation, including monologues inspired by real stories from survivors of sexual assault, to the class of 2020 about consent on Monday, Aug. 29, 2016.

Editor’s note: justin adkins spells his name entirely in lowercase, and we have preserved this spelling.

The event was part of the Class of 2020’s orientation and focused on consent, being a proactive bystander and keeping fellow students safe.

Kimberly Ferguson, dean of students, said this was the first year a program on consent had featured acted out scenarios and monologues based on true stories.

The event was conducted by Speak About It, an organization that puts on programs for college students related to consent, sexual assault and ensuring healthy sexual relationships.

Ferguson said the program was first brought to her attention by Associate Dean and Director of the  Inclusion, Diversity, Equity, Access and Social Justice Center, justin adkins.

While working at Williams College in Massachusetts, adkins said he worked with Speak About It as an adviser and was able to recommend the organization to Allegheny College.

“When [adkins] told me they work entirely with liberal arts colleges on consent and sexual assault, I jumped at it,” Ferguson said.

The program, adkins said, is unique in the way in which it uses real stories of students to get its point across. He said the group does not limit itself in terms of the types of relationships it portrays.

“I also love that it’s not just about heterosexual relationships,” adkins said.

Rudy Gerson, one of Speak About It’s actors, explained to the assembled class that they do not tell these stories to shock the audience, but to make an important point.

“These stories are intense and very hard to hear,” he said. “We share them with you to show you that sexual assault is a reality on this campus.”

Kristen DiMercurio, a Speak About It actress, delivered a monologue as a student in which she thanked the person who had stepped in and given her a way out of going home with a guy while they were both intoxicated.

“I know you could see something was wrong,” DiMercurio said during the performance. “Thank you for helping me to get away.”

Her fellow actors from Speak About It used DiMercurio’s monologue as an example of how simply offering the chance to get out of a situation can be all that is needed. In that particular case, it was simply asking if she wanted to get pizza.

The group explained they did not want students to become the “consent police,” and interfere in every interaction, but to simply look out for one another. The actors said it was also important to accept the fact that sexual assault is a serious issue that must be addressed.

“It’s important that we all understand the real threat of sexual assault on college campuses,” said Mark Wolf Roberts, another actor in the group.

In one of his monologues, Roberts portrayed a college student who learned six months into a relationship that his girlfriend had been sexually assaulted. He spoke candidly of how he felt, and how it forever changed their relationship.

“I never knew that someone I loved could have been hurt so badly,” Roberts said.

While the presentation dealt with the trauma and stories of survivors, it also told the stories of how they learned to heal. Speak About It listed the resources that were available specifically at Allegheny.

adkins said the way the show is tailored to each school is another unique feature about the program.

The actors on stage encouraged anyone who was triggered by the stories being told to speak with any of the faculty and staff wearing pink stars during or after the program.

Ferguson said the event is largely intended to educate students and hopefully define what is acceptable and what is not.

“I think it is important for us for students to understand consent,” Ferguson said.

She said by having Speak About It come to campus, she hoped students felt more as if they were being mentored by a peer.

“We didn’t want to be talking at the students,” she said.

adkins said this is a program he feels can benefit any school regardless of if they have received Title IX complaints like Allegheny or not. He said the message of the program is universal and simple.

“It’s a very simple message of: ‘Don’t assault each other,’” he said.